Eye-opening Boat Trip on Bantry Bay. Thanks to Diarmaid of the Fish Kitchen.

September 17, 2018
Eye-opening Boat Trip on Bantry Bay
Thanks to Diarmaid Murphy of the Fish Kitchen. 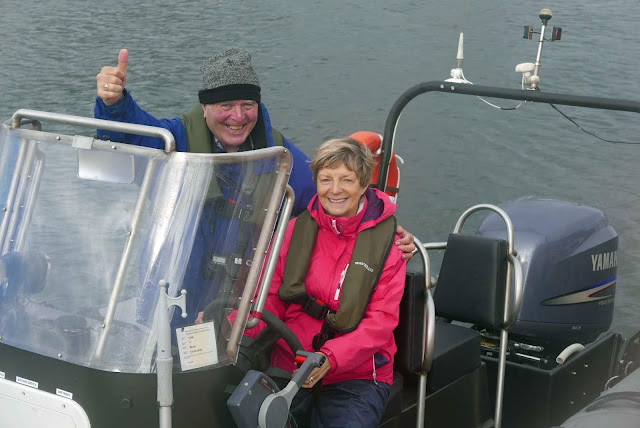 Last week we found ourselves in a boat in the middle of the Bantry Bay mussel farming area, very extensive, and could see the long lines where blue mussels are placed on ropes that remain suspended in the water. Once the industry was very labour intensive but Diarmuid told us that it is now very much mechanised. In any case, the results are great as we found later that evening in the Murphy’s Fish Kitchen.

If you want a guide to Bantry, land and sea, Diarmaid Murphy of the Fish Kitchen is your man. He has immense experience of the sea, including boats (he is cox for the local lifeboat) and fishing, and allied to that is a love and detailed knowledge of the history of the town and its magnificent bay and its surrounds. Next summer (2019), he plans to do guided trips on his six-passenger rib.
We were delighted with our “preview”. It wasn't the best of days on the bay, far from the worst though, and we were in good hands as we headed out from the new marina that has made a huge difference to boating in the bay.
Having left the Bantry pier and the marina behind - the ferry from Whiddy Island was coming in - we headed towards the left of the island taking a look to the mainland on our left. Diarmuid pointed out the aerodrome where private planes come and go, some from the continent. Nearby too is the Blue Cliff. Not blue during our trip but quite grey. The blue is noticeable when the sun shines.

Plan was to do  full circle around Whiddy and get close to the liner over in Glengarriff. But, with the rib hopping off the incessant waves, discretion was the better part of valour so we turned and ran alongside the town side of the long island, meeting the ferry again on its return trip. We saw the local pub, the Bank House.

Of course, one of the major historical events in the bay came with the Wolfe Tone attempted invasion in 1796. Unsettled by this, the British ordered the construction of three forts on the island and these were pointed out to us in their hilltop locations.
Over a hundred years later, the USA Navy set up a short-lived flying-boat base here during the great war and the planes were used to hunt German submarines. And in 22 October 1918, Walford A. Anderson (an US flier from Springfield, MO) was killed in a crash, the first ever air-crash fatality in Ireland according to our guide.

There was a much larger tragedy on Whiddy in January 1979, when the oil tanker Betelgeuse blew up at the offshore jetty for the oil terminal on the island. The explosion and resultant fire cost 50 lives.
Soon we were at the other (eastern) corner of Whiddy, we could see across towards Glengarriff and the visiting cruise liner, the Astoria. Diarmuid thought we might get closer from this side but it was not to be as the waves were a little too big so we retreated in the general direction of Ballylickey.
There were plenty of mussel rows here also and we got a splendid view of the Eagle Point Caravan Park; it has a very impressive location indeed and well spaced pitches. No wonder it is a very popular place and locals mark the start of summer when the “Eagle-Pointers” arrive.
In this area also, you’ll find Donemark (the fort of the ships). Often saw this name on signposts but didn’t realise the legends and history attached to it. Indeed, they say it is the first place that humans (the Milesians) landed in Ireland although there is also a story that a niece of Noah’s landed here much earlier!
Bantry Bay longboats are replicas of the captain’s landing vessel used by the French navy in the 1700s. A longboat from the Wolfe Tone attempt was found in the bay and eventually ended up in Bantry House. There have been international races featuring the longboats and their 13-person crews and again Diarmaid has been involved.
Other points of interest included the very scenic Bantry Golf Club, the hill of Seskin, the various smaller islands, the ruin of the jetty wrecked in the 1979 explosion and more. I may well have missed out on some others as sometimes, with the wind, it was hard to hear each other and it was not a day to be taking notes and not the best of days for photos either. But the whole experience was brilliant, exhilarating for these two ancient land-lubbers.

Thanks a million to Diarmaid and we wish him well on his sight-seeing venture next summer and will let you have details when available.

Read all about our dinner at the Fish Kitchen here.