Cheese makers may often live in isolated places but not in isolation. And it is no surprise to hear Siobhán Ní Ghairbhith of St Tola enthusiastically speak of the Burren and Cliffs of Moher UNESCO Geopark during the Cork Cheese Week at the Airport Hotel. The natural treasures of County Clare (and indeed of any county) must be managed in a sustainable way, as must the local farms.

Siobhán is one of the people supporting this drive to preserve the unique landscape to help develop thriving communities. If the landscape is damaged so too is our future, whether we are farmers or consumers. Might be a bit late this year (though you’d never know!) but I’ll certainly be heading to Clare next year to explore the park and also the Burren Food Trail. 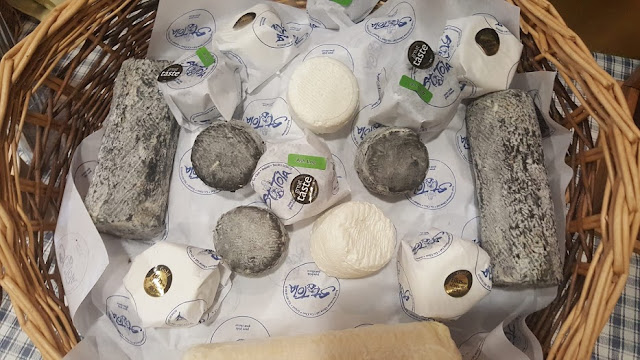 Hadn’t met Siobhán for a few years (aside from Twitter of course!) but did stay very much in touch with her St Tola Irish Goat Cheese, a magnificent cheese (especially the ash log version). The St Tola motto is “better, not bigger.” And it is better. Try it for yourself; stockists listed here.

Coolea Cheese is nowadays made by Dicky Willems junior. Nothing but healthy fresh cows milk is used to produce this internationally highly acclaimed cheese on a mountain farm in Coolea, West Cork. One cheese but sold at different ages, from a mild and creamy 3 to 6 months version to the deep intensely flavoured Extra Matured (18 months). “You can’t improve on perfection,” said Dicky’s sister Lenneka when I met her at the Airport Hotel. No arguing with that! 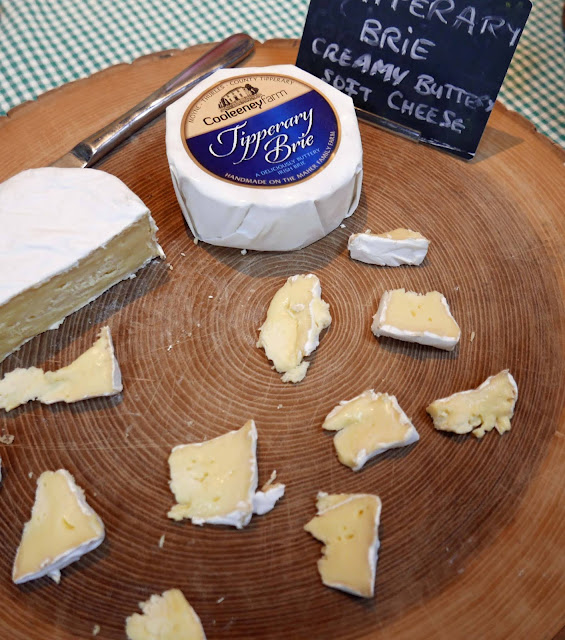 Ballinrostig Cheese is owned and run by husband and wife team, Stephen Bender and Michele Cashman, since 2014. This year they converted their entire range to organic.  Their basic product is a Gouda style cheese.  The signature cheese is the Ballinrostig Organic Gold, mainly made from Jersey Milk, and it’s a beauty! The Gouda style herb cheese range includes Nettle, Cumin and Red Pepper and Garlic.  In addition they produce an Organic Cream Cheese with Nettle and Garlic, and a Halloumi and a Bán (Feta) cheese.

Widely available are the goats cheeses being produced by Bluebell Falls from Newtownshandrum in North Cork. Outlets include SuperValu, Tesco and On The Pigs Back. I asked Victor how the change to tubs (from their earlier “tubes”) was going. “Very well indeed,” he said. “The tubs are more convenient, easier to open and easy to reseal.” And the quality is as good as ever! 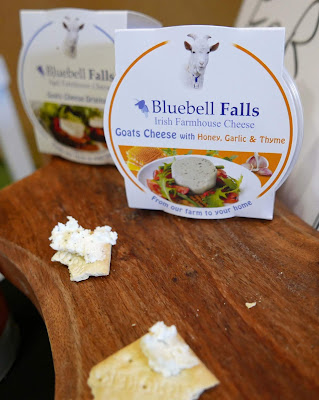 Tipperary’s Cooleeney are well established and have been making cheese for 30 years. Catriona told me that they make no less than 13 varieties “mainly brie and camembert and a few hard ones also”. The milk comes from their own cows while the goats milk comes from local farmers. Enjoyed tasting their Gortnamona Brie style soft goats cheese and also their delicious Tipperary Brie, mild, creamy and buttery, the milk from their own cows.

I also met Rob, representing Knockalara Sheep’s Cheese from County Waterford. The cheese, mild and soft, is made by his in-laws Agnes and Wolfgang Schliebitz in West Waterford, and was the centre-point of a delightfully delicious dish with pistachio, baby artichoke and roasted red pepper during a recent visit to the up and coming Waterford city restaurant Everett’s.

They also do a mature version. Their cheeses - they also do a goats cheese - are available at local markets: Waterford City Market (Saturday); Dungarvan Farmers Market (Thursday); and Ardmore Market (Sundays in summer). Heard they made quite a match at the cheese show finding a perfect pairing with Melanie Harty’s Apple and Sage Jelly with chilli! 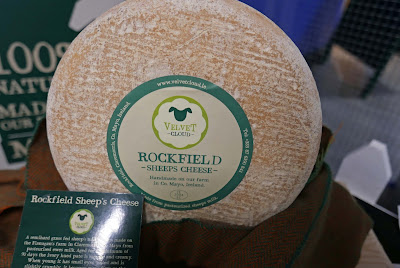 I did a few turns around the various stalls at the Airport Hotel but missed out on at least two. One was Coolatin, hand-crafted by Tim Burgess from his own pasture fed cows in West Wicklow for the past 20 years with a motto for their Mature Raw Milk Cheddar that reads: Pasture to Cheddar The Same Day.

Quality is enhanced by processing only in the summer months when the cows are grazing fresh clover-rich pastures. Besides, they use early morning milk, high in melatonin which aids sleep and relaxation and there is no storage or pasteurisation with the milk going direct to the cheese-vat.

The Carlow Farmhouse stand was also busy each time I called. They make an award winning Sheep Cheese, a hard cheese, which may be matured for up to two years. They also produce a Goats Tomme and a Cow Cheese (sometimes flavoured with herbs and spices).

Part One featured mostly the new cheeses and you may read it here.
See Also: The Cork Cheese Dinner