The Best Pilgrim’s Meal?
Rosscarbery. Not Roncesvalles.
If you’re on the Camino, on the way to Santiago di Compostela, you will enjoy a Pilgrim’s Meal or two. But no need to go so far.

Just get down to Rosscarbery to the Pilgrim’s Restaurant in the West Cork village, and you’ll enjoy one of the best meals ever. That has been my experience on a couple of occasions now. The dinner here in this modest 35 seater is superb, the produce sourced and cooked by Mark Jennings, brought together in a splendid serving, is more enjoyable than many highly touted tasting menus.

I know many of us love to check out the menus before we go. Not possible here! They wait until the day, to see what’s best from the fields and hedges, what has come in on the fishing boats, before posting the menu on the restaurant windows shortly ahead of opening. Still, if you check the website here, you will be able to see one or two recent menus and that will give you a good idea.

Provenance is hugely important here. There are dozens of suppliers listed on the back of the menu, some of them well known such as the local Bushy’s strawberries and Toonsbridge Dairy, others you’ve probably never heard of like Radical Roots from Leap and Ardfield Mountain Honey.

The menu is not long, about three choices under each of the usual headings. Usual headings but not usual dishes. How about a “nibble” of Tatsuta age, ponzu? We enjoyed that, a Japanese style chicken dish, the chicken moist under the crispy coating. Don’t worry if you aren’t familiar with some of the ingredients - they will proactively explain everything to you in a gentle courteous way, without any fuss at all.

After sharing that delicious chicken, we moved on and shared everything else as well! One starter was Roast aubergine, lamb’s liver and tongue, flat bean, cabbage, radish and chilli-sesame oil, basil. Well used to lamb’s liver here but never anything like this in an outstanding ensemble of flavour and texture.


And on it went. The other starter, if along more expected lines, was also a gem and consisted of Mike’s tomatoes, Toonsbridge burrata, cucumber, brined summer pickles, bay oil, and kale crisp.

They have some gorgeous European wines here. We were wondering what would go best especially since we were sharing. We settled on the Austrian Diwald Grossridenthaler Löss Grüner Veltliner. I always find the GV a very versatile wine indeed and so it proved once again. Most wines here, if not all, are organic.

Time now for the mains. The most spectacular was probably the Battered Hake stuffed squash flowers, prawns, tomato lemon verbena broth, and flat beans. Looked well but tasted even better.

Choices for the finalé include Ices, Puddings, and Cheese. That cheese by the way was the Baked Corleggy Cavanbert. Tempted yes but we left it for another day. 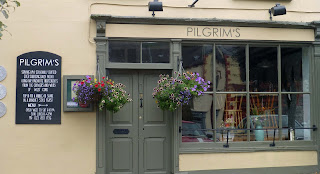 * Roncesvalles is a Spanish town in the Pyrenees just over the border from France and on the Camino (Santiago is still over 700 kms away).  I drove in there a few years ago from Saint-Jean-Pied-de-Port and asked for the Pilgrim’s Meal. But I was a few hours too early - they serve it only in the evening - and had to settle for a sandwich.