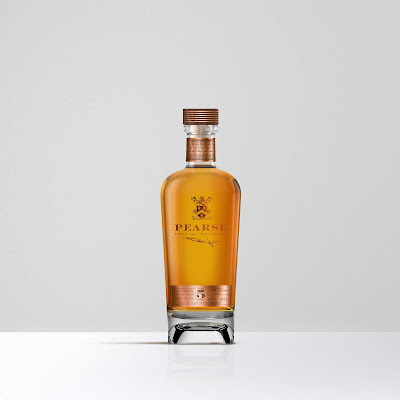 Something amazingly clean about this, the crispness of the fruit (apple, citrus), the toast of the oak, a waft of pepper, and the clove notes, all there from the start to the lingering finish. Spice and citrus also feature in the aromas and the malt too of course. Nothing overly complex here, just pleasant clean lines, not unlike the lines of the stained glass windows in the Church of St James in Dublin, the home of the Pearse Lyons Distillery.*

It has been wholly produced and aged in Ireland.  Using Irish malted barley and their own special yeast strain, the whiskey spirit was produced on the unique pair of copper pot stills imported from Kentucky and aged in bourbon casks from their distillery in Lexington Kentucky.

The unique design of the unusual small-batch copper stills is credited with giving the whiskey a special character. The wash still, christened ‘Mighty Molly’, includes a “neck and ball” configuration which assists in refining the spirit character in the first step of distillation. The spirit still, ‘Little Lizzie’,  features four rectification plates that further purify and refine the spirit collected, harnessing the fullness, complexity and refinement of flavour of a double-distilled Irish Whiskey.

A Malt Whiskey, by the way, is made solely from malted barley in copper pot stills. A single malt is the product of a single distillery.

Conor Ryan, Global Whiskey Ambassador at the Pearse Lyons Distillery spoke at the recent launch: “As with the other whiskeys produced at the Pearse Lyons Distillery, the Pearse 5-year-old Single-Malt features no additional colourings, so the colour you see has been purely produced in the natural barrel ageing process. The maturation process has an enormous influence on the flavour profile of the end product whiskey with the length of time, quality and previous use of the barrel being the crucial components. We are lucky to have a fantastic supply of fresh used ex bourbon casks which we source from our sister distillery in Kentucky which contributes vanilla, toasted wood, fruity and spicy notes to the final product.”

The bottle design has been inspired by St James Church, the home of the Pearse Lyons Distillery.  The centrepiece of the label features the octagonal spire, the view seen when looking up from inside the distillery and the colour scheme reflects the copper stills which were used to produce the whiskey. Each of the limited-edition bottles has been individually numbered and the first bottle will be positioned in pride of place at the Pearse Lyons Distillery in the Liberties. 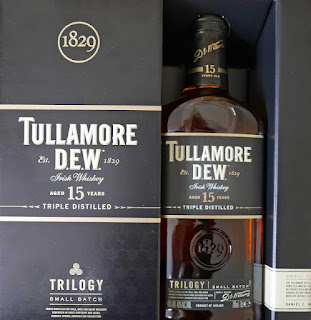 I enjoyed this one when I tasted it during a summer visit to the distillery, well the visitor centre, in Tullamore and enjoyed it even better when I poured from the bottle the other night.

The amber draws you in, as do the aromas of tropical fruit and sweet spice. On the palate it is rich and mellow, soft and full bodied, very approachable (more so with a few, a very few, drops of water) and there is a long and richly satisfying finish. One for the short list!

The Trilogy name refers in part at least to the fact that three different types of cask have been used. It was matured in Sherry and Bourbon and finished off in Rum casks. The deeper colour comes from the wood as well.

But where did the basic whiskey itself come from? The distillery operated between 1829 and the early 1950s and was revived by William Grant in 2010 so not their own whiskey obviously. I’ve read it came from Midleton and Bushmills. Three types of whiskey too, pot still, malt and grain, each triple distilled, the combination also a trilogy.

We’ll let the distillery have the final word - note the three generations: “Our 15 Year Old Trilogy is the very pinnacle of our craft. Across three generations of Williams, the three unique crafts of distillation, blending and maturation in finest oak were honed.”