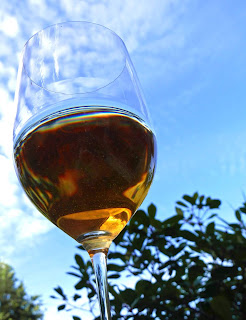 When American artist John Wurdeman, then working in the Soviet Union, was persuaded by a new-found friend to get involved in a Georgian winery, they were thinking of using oak, like some were. But the local bishop put them on the right wine road: “Stay with tradition. Keep true to the Georgian way. Use no additives. Use qvevri. Have faith.”

And so John Wurdeman and Gela Patalashvili now use the qvevri and, “with love and awe”, make their wine as it has been made here for 8,000 years. “Our natural wines are made entirely in qvevri inside the womb of the earth.” A qvevri is huge earthenware vat sunk into the ground and used for fermentation and storage. Another difference is that the Georgians use skin contact extensively, hence the deep colours of the two wines in this post.

“At Pheasant's Tears we believe our primary task is to grow endemic grapes from unparalleled Georgian soil, harvest that fruit and then preserve it as wine using traditional Georgian methods.

In working this close to the vine we experience both heartache and celebration; yet every year there is a new harvest to cultivate, and the eventual discovery of a wine of untold beauty.” This is one of the beauties!

To read more on the amazing story, including how the Georgian winemakers survived a long period of Soviet industrialisation of the vineyard and the winery, get your hands on “For the love of wine” by Alice Feiring. And to understand better the philosophy behind the men and women of Pheasant’s Tears check out this YouTube video.

And so back to our bottle made from the white wine grape Rkatsiteli where the skin contact helps give this amazing amber colour. Nose is intense with a waft of honey. The palate is rich with range peel and dried apricot and walnut notes also. It is full-bodied and the noticeably dry finish is persistent, with tannins kissing the lips.

It is versatile with food (ask the Georgians who typically allow three litres per person at their legendary feasts). We tried it with Chicken Piri Piri (with a courgette and tomato accompaniment from the garden). Later, with a bowl of unadorned strawberries. And later again with a slice of courgette (a bit of a glut at present!) and walnut cake. 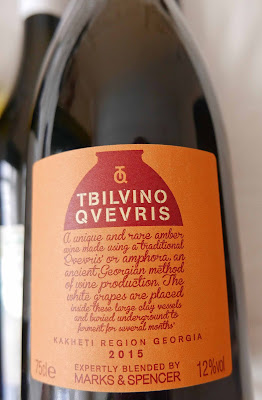 Okay, so you need a bit of translation. Tbilvino are the producers for Marks and Spencer who blended it. Rkatsiteli is the grape and the Qvevri is the Georgina underground vessel (an amphora) in which the wine has matured. Kakheti is the wine region in the far east of the country.

The company story begins in the twentieth century, in 1962, when one of the most powerful wine factories in the Soviet Union was launched in Tbilisi. For years the factory remained an essential part of the Soviet winemaking industry (nine of ten bottles of wine sold inside the country and abroad were made in this factory). The emphasis was more on quantity than quality until the early 1990s when it emerged as an independent wine company with a new philosophy.

M & S say this orange wine from the white Rkatsiteli grapes is made in the traditional manner. The grape juice and skins are fermented together, then partially matured in the Qvevri for several months developing the wine’s rich and unique style. So unique that wine beginners may not like it, so be careful who you offer it to.

The colour, some say orange, some amber, is striking in the glass and the rich aromas have hints of honey. Rich and deep too on the palate, dried fruit (apricot), some spice too, nutty notes also in the mix. And a good finish as well. Highly Recommended. I think food is an essential with this one and M&S recommend pairing it with mixed seafood platters, and spicy dishes such as chicken tagine or tandoori chicken.