Granville Hotel’s a Superb Base for Waterford Getaway


Granville Hotel’s a Superb Base for Waterford Getaway

I’m sitting in the busy TF Meagher Bar in Waterford’s Granville Hotel, sipping a pint of Helvic Gold Ale by Dungarvan Brewery. The bar is busy, with most of the customers eating from the well-priced bar menu. There are old prints and pictures all over the place, hardly a spare bit of space on the walls.

One catches my eye. The tour de France is currently running and Carrick on Suir man Sean Kelly is one of the Eurosport commentators. The Granville have a painting of the cyclist when he was a very young competitor indeed.

Another pic is even more eye-catching. It is a large scale drawing of a group of heads, nine in all if I remember rightly. Who are they? Politicians? Perhaps, but we don't recognise any. We ask the barman and he tells it’s an representation of a bunch of regulars and that a few are still alive. Great to see a bar appreciate their regulars!

The Granville is a friendly place, thanks to its staff. Our room is excellent; we have everything we need and a view over the quays where our car is parked for free (thanks to an arrangement between the hotel and the operators).

We are in Waterford for about twenty four hours and our first stop for grub is at the Candied Hazelnut, a relatively new restaurant on O’Connell Street. Its food is gluten free, peanut free and plant based and the casual and colourful space is fast becoming a favourite haunt for foodies, coeliacs, vegetarians, vegans, plant based people, tea and coffee lovers, and those with a sweet tooth. We enjoyed our meal there and you may read about it here.

On recent visits, we’ve seen the three museums (account here) and taken the Waterford Crystal tour (account here). So we headed out to nearby Kilmeaden to visit Mount Congreve House and Gardens.

Quite a few signed walks on this massive 70-acre estate and of course we took the orange one, the long one. There is a walled garden here, with a frail Georgian glasshouse. But it is mainly about large-scale plantings where some great views open up over the Suir, especially from the Temple.

The 4-acre walled garden was alive with bees and insects and further into the walk we saw a couple of sturdy rabbits bouncing around in the trees. Later, near the entrance/exit, a fox prowled in the distant corner of a field.

As we finished our walk, we got a fine view of the house itself. There is a excellent café near the garden shop and here we enjoyed a decent cup of coffee but, with dinner not too far away, we avoided the good things. Nearby is the terminus for the Waterford & Suir Valley railway but we had missed the last run at four o’clock. Next time. This picturesque run takes you into Waterford and back, and runs at the margins of Mount Congreve, alongside the Suir and the Greenway.

The dinner I mentioned would be in Everett’s, another relatively new restaurant here, sited near the Medieval Museum in a very old building indeed and part of it is based in ancient wine vaults. We thoroughly enjoyed our visit and the account is here. 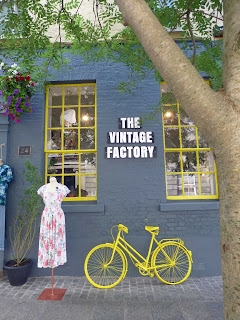 It was after that that we enjoyed a spell in the Granville bar. After a good night’s sleep we were ready for breakfast. And what a breakfast you get here in the Bianconi Room, their main restaurant.

Take the porridge, for example. It is of course the Flahavan’s variety and you can add to it from a selection of Bailey’s Cream, Irish Whiskey, Muldoon’s Waterford Whiskey Liqueur, or Highbank organic Apple Syrup!

It is a fantastic buffet selection and the hot dishes from the kitchen are also top notch, including the Full Irish of course. But being in Waterford, I just had to have a Blaa. And there it was on the menu: Blaa Eggs Benedict Waterford Style (poached eggs and ham on toasted Waterford blaa with Hollandaise). Delighted with it. Maybe Cork Chef Bryan McCarthy should have went with the Blaa in Barrack Street rather than the bao. Blaa Boi would make a good name too!


Full after that excellent breakfast, it was time to say goodbye to the Granville and head west along. And we stayed on the main road (the N25) until just beyond Leamybrien when we turned left on a country road towards Durrow. We were following signs for the Waterford Greenway and soon arrived at the parking area near a bar and shop where you could have a bite to eat and hire a bike.

No bikes for us and we walked along in the sun. For a while. After a few minutes we found ourselves in the Ballyvoile Tunnel, cool and a few drops of water falling down too. Soon we were back in the sun, admiring the countryside and before we knew it were atop the Ballyvoile viaduct where the views improved! Quite a few cycling and not too many walking.

We carried on for another while in the direction of Clonea and, not too far from the viaduct, we got a brilliant view of the ocean. Time to return, we thought, and so we retraced our steps to Durrow, the total walk, a leisurely one with lots of stops for photos, taking just over an hour.

It was getting close to lunch-time and we had just the spot in mind, having read a few days earlier that the Cliff House Bar had introduced a new menu. And a good one it is as we found out as we relaxed on the terrace watching the comings and goings on the blue waters below. A superb finalé - read all about the meal below - to our superb trip to Waterford.