Kate Lawlor, for so long associated with Fenn’s Quay, is now enjoying her Head Chef role at The Oyster Tavern in Cork city centre. And the team there, quite a young one, have a great chance to learn from one of the hardest working chefs around but one who enjoys “teaching others the joy of cooking, taking raw ingredients and making wonderful dishes.  I also enjoy heading to the English Market and meeting suppliers”.

Her aim now is make the Oyster and its food offering better known among the public. We caught up with Kate after a lovely meal in the Oyster and enjoyed this chat.

I know you were sad to leave Fenn’s Quay. But you’re still on familiar ground and things have worked out well?
After a little break after closing Fenn’s, it felt right to take on the role in the Oyster with its history and of course its location on Market Lane into the English Market. It’s taken me a few months to settle into new surroundings but, with the support of Bob (general manager) Dee (restaurant manager ) and Chris Curtin (assistant head chef)  and team, menus are coming together nicely. 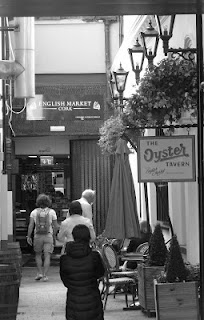 What direction is cooking here at The Oyster taking? What can we expect in the near future?
It’s very much a simple approach to good quality produce sourced within the English Market with a few Fenn’s classics popping up such as the flourless chocolate pudding  and the warm chicken salad on the lunch. There is a big emphasis on steaks and fish which will continue to evolve with the seasons.

How did you start in the business? Was there a good cook at home or other family inspiration?
Having taken up Home Ec in Secondary School my first summer job was in a cafe kitchen aged 16. I really enjoyed it, the cooking, the creating, so it was suggested I apply to what was then Cert in Cork Institute of Technology and the rest you could say is history. In later years I returned to complete a degree in Culinary Arts.

Do you shout in the kitchen?
I tend not to. I learnt early on I didn’t like being shouted at and therefore I shouldn’t shout at someone, it only makes the situation worse.

The importance of prepping. Do you ever have enough time in the kitchen?
Some days are easier than others. There is  a great saying “mise en place saves your ass “ and it’s true. Still, you do have days when you feel you’re never on top of it but, with a great team behind you, you get there in the end.

Sourcing and provenance is important to you?
For me it is. It may cost a bit more but it’s worth it as I like to know the person behind the products and learn about how it’s made

Have you ever come up with a dish by accident, a fluke?
Specials for me are always a bit of a fluke as always last on the prep list. Recently I cooked some pearl barley with carrots onions and some fennel seeds, added cabbage & prawn & a dash of lemon served with turbot & butternut squash purée. It truly was a dish I was super proud of.

Meat as back-up, not the main feature in a dish? Will that happen?
Attitudes to food are changing but still our meat sales outweigh the vegetarian at present so I can’t see that happening. 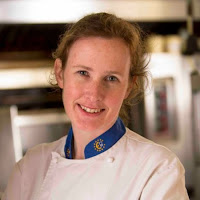 What non-Irish cuisine do you like most?
At present Japanese. Its clean flavours in the broths and the precision is mesmerising .

What is the best meal you’ve ever had?
Hard to pick out one in particular. Really enjoyed Nathan Outlaw and JP McMahon's collaboration in Aniar, Purnell's in Birmingham , 1826 in Adare. But best in the last 12 months was when I collaborated with Derry Clarke’s menu at the Oyster last November.

Kate is set to star, along with Donegal's Gary O'Hanlon, in the first episode of a new RTE cooking series called Healthy Appetite, which is all about good food.  Episode one kicks off on RTE1 on Wednesday, April 18th at 8.30pm. @MindtheGapFilms

See A Specials Evening at The Oyster Tavern.