The Rich And Famous (and me) Stay At Glengarriff's Eccles Hotel


The Rich And Famous (and me) Stay
At Glengarriff's Eccles Hotel

I recently added my name to a list that includes William Makepeace Thackeray, George Bernard Shaw, William Butler Yeats and, of more recent vintage, Pippa Middleton. They all stayed at the Eccles Hotel in Glengarriff. The splendidly situated hotel opened in 1745 and is currently undergoing renovation under new owners but is fully open for business.

Visitors are invariably impressed. Thackeray wrote “What sends tourists to the Rhine and Saxon Switzerland? Within 5 miles of the pretty Inn of Glengarriff there is a country of the magnificence of which no pen can give any idea.” There is still a room named after him in the hotel. 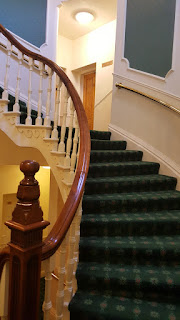 Punch Magazine, in a kind of 1870s Trip Advisor review, wrote: Glengarriff – Eccles Hotel, charmingly situated. Facing the bay and on the road. Old fashioned, covered with creepers and roses with bedrooms commanding the bay view. The Eccles is worth more than a passing visit. I am delighted with it. It is, as far as attendance, cuisine, and general comfort the best hotel I’ve been in.

So how did I get on there? Very well indeed. The hotel, just off the main road, is as you probably know situated on a little height overlooking the bay. You will see splendid views even from the bar on the ground floor. Stroll across the road and you may get a boat to Garinish Island and I did just that, taking in the island, the basking seals and the eagle’s nest (a new temporary attraction here).

I stayed in one of the renovated front rooms at €100.00 per night with breakfast; the room had a bay view and cost a few euro extra. While not the biggest, the room (with its old fashioned high ceiling) was very comfortable, nicely decorated and both it and the bathroom were well equipped

They serve breakfast upstairs in the Garinish Restaurant, a splendid room indeed. And breakfast was rather splendid too, excellent service too. An eye-catching table was laden with all kinds of good stuff: fruit juices, cereals and breads while you could also order something hot, including the full traditional Irish, from the kitchen. My order was Eggs Benedict and that got me off to a good start for the day.

Local producers get a fair crack of the whip here. They featured at breakfast and also in the dinner that we enjoyed, not in the Garinish (which will serve dinner later in the year), but in the Harbour Bar downstairs.

At first glance, the menu seems ordinary enough but do study the bits and pieces that come with your meat or fish and you will note some combinations that are a little different and, in this case, more than a little better, than usual.

We were by the sea, so you'd expect salmon on the menu. But the Eccles version is something else. I thought it worth exploring and was delighted with my Cork Whiskey and Vanilla Cured Salmon (Braised Barley, Apple, Prawn, Radish, Herb Cream).

There’s a pretty good choice here, augmented by specials on the board. Indeed, CL picked from that board on the bar counter and came up trumps with her Herb Crusted Baked Hake, served with a red pepper confit. Both mains were fairly priced in the mid-teens. Other options included steak, chicken, lamb, and burger.

No shortage of starters either, including cheese and meat platters with Gubbeen featuring. Gubbeen too in my starter: the flavourful Crubeens (Smoked Gubbeen Bacon Hock, Piccalilli, Gem, Pickled Onion.). CL’s Bantry Bay Mussels came with an rather unusual but excellent Cider, Apple and Barley “sauce”.

Service was pretty good throughout our short stay and the WiFi was excellent in the room.

Indeed, the only thing on the downside was that they seemed to be running down their stock of craft beer. They had a tap for 8 Degrees Howling Gale but no beer. So we asked for two bottles of the Full Irish - they had just one. In the end we shared a larger bottle of Mountain Man’s Banjo’d and noticed, just as we were about to finish, that it was well out of date. On the other hand and to finish on a good note, we later enjoyed a couple of glasses of the local and excellent Beara Gin.
Links for this visit:
Inchydoney Hotel Wine Dinner.
Bantry Market.
Syrian Food at Bandon's Bayleaf.
A Couple of Days in West Cork