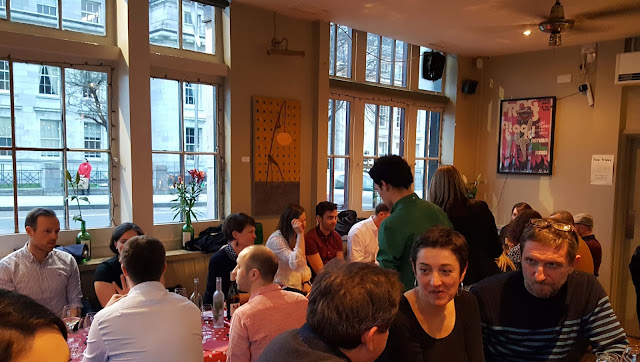 They came. They saw. They conquered. They, collectively the Frogs Attack, being two pioneering natural winemakers (Jean Foillard and Thierry Puzelat), a guerrilla chef (Antony Cointre) and a comedian (Sebastien Barrier) and they cornered their willing victims in a packed Latitude 51.

Cork’s leading wine bar was the ideal venue for the French influenced evening. Beverley and her staff caught the informal spirit of the occasion perfectly and we wined and dined, and laughed a lot too.

Hard to keep up with Sebastien as he roamed between the two floors. He even wandered outside at one stage, startling the customers by banging on the window and, with his phone, taking photos of the surprised faces. We were wondering was the ebullient funny man in trouble a few minutes later when a couple of cops appeared at the door but nothing to do with Sebastien! 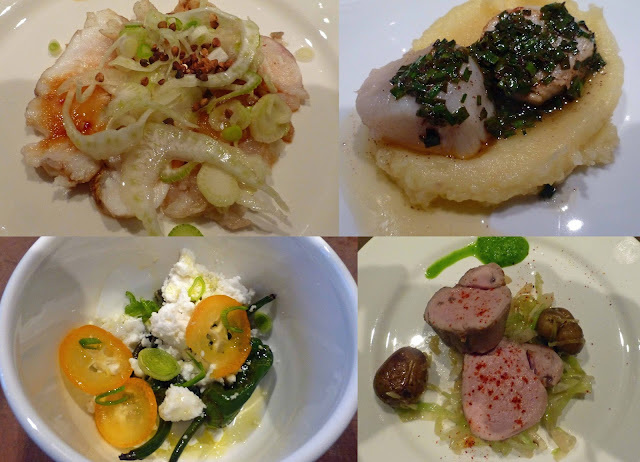 May I introduce Jean Foillard to you, via Le Caveau catalogue: A vigneron like Jean Foillard doesn’t come around too often. Jean Foillard and his wife Agnès started their handkerchief-size domain in Morgon in the 1980’s when the majority of appellation, driven by big negoces, were (and are still) producing industrial wines. Undeterred by their surroundings, Jean and Agnès decided to embark on their own path. They returned to honest vine growing and wine making the way their grandparents did. The vines are grown organically. The same attention is paid in their cellar. There are no additives in the cellar to hide shortcuts in the vineyards because there are no shortcuts in the vineyards. The hand-harvested grapes are fermented using natural yeasts only.

And, quoting from the same source, Thierry Puzelat: Having met and worked with Francois Dutheil (Bandol) and Marcel Lapierre (Morgon), two pioneers of the ‘natural’ wine movement, Thierry decided he too, wanted to make his wines as naturally as possible. Puzelat’s wines are quite unique, they are highly expressive of their terroir, authentic, filled with life and have very strong personality.
Le Caveau borrowed, as we do here, this quote from Jamie Goode: ‘Thierry and Jean-Marie Puzelat—brothers—are natural wine royalty. They are making some of the Loire’s most interesting wines and are at the heart of the natural wine movement.’

And the wines really are superb. The night’s list: Thierry’s Clos du Tue Boeuf, blanc and rouge, and the three Morgons from Jean, all 2016, including his “Cote du Py” and the “Corcelette”. And to make things even better, they were available at shop (rather than restaurant) prices. A nice touch that!

According to his website, Antony Cointre, aka Le Gros, is not an ordinary chef, he is an enthusiastic cook. He does not have a permanent restaurant because he likes to change atmosphere and to touch lots of different audiences. …. making tasting meals in 10 steps at home for 6 or popular banquets of 650 people or even weddings in unlikely conditions.

And Le Gros, in the tiny kitchen, came up with some tasty dishes at L’Atitude. They included a Feta and Kumquat starter, then a Monkfish carpaccio with Harissa sauce, three French cheeses with date, and dessert of chocolate and, believe or not, rhubarb.

In between the six courses, Sebastian kept us entertained and joined up with some Irish friends to play some tunes. And all the time, we were sipping and enjoying those natural wines, the real stars of the show!

I’ll finish with a message to the frogs: Please attack us again, soon!