Beer, Cider, Food, Music
Headed to the City Hall at the weekend for the Great Irish beer Festival. Some twenty brewers were listed so that meant a huge choice. While each exhibitor displayed their menu, there was no overall list, such as you’d find at a wine-tasting.

More difficult then to find a particular pathway through that amount of beer. Who had the sours? Who had the stouts? Did they bring them? Were all the recent award winners here?

It would have been made a little easier also if there was a measure smaller than the half-pint (€2.75). On the other hand, if you knew exactly what you wanted, all you needed to do was fill your glass (€5.50) to the pint mark!

I had targeted Sullivan’s from Kilkenny for my first call. That worked out well and there’ll be a separate post tomorrow on their lovely award winning red ale.

Indeed, there were award winners all over the hall, including local brewery Rising Sons who are having a great month: “August 2017 has been an incredible month for us, winning 5 Gold Medals at The World Beer Awards 2017.”

Not too far away in this bright room, with the tables and seats, was the Mont stall and they too were celebrating a World Beer Award as their lager was named the Country Winner (Ireland) for “Czech Style Pilsner Lager”. 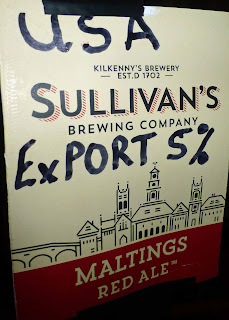 Michael said they are a dedicated lager brewery. “With the very soft Wicklow water we have, our super-premium lager is better than the main stream piss and we are trying to improve lager’s image with a big concentration on packaging.”

Their Bohemian style Pilsner has “an Irish accent” and an ABV of 5.1%. You can quickly taste why it is picking up awards. There is quite a backbone to it, full of flavour and hop character and a superb dry finish, great balance all through. “Moreish” as they say themselves.

Just to compare, I took a token over to Eight Degrees - they were in the darkened room - and got a glass of their Barefoot Bohemian,  “an unorthodox lager with complex biscuity malt, soft rounded bitterness and a twist of spice from the noble Saaz and Hallertau hops.”
This crisp and lovely Pilsner doesn't quite have the heft of the Mont but, at 4% ABV, is perfect for a session. And it has retained its popularity since the summer of 2012 when the Mitchelstown brewery introduced it as a seasonal beer. 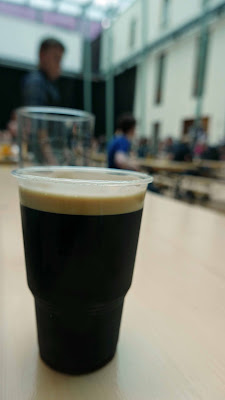 The Cotton Ball’s Indian Summer is another beer that has surprised its creators. This hybrid, “capturing the best of ale and lager” was supposed to be a seasonal but goes on and on.

After that we welcomed the Shoot the Breeze, a 4.5% ABV California Common, just introduced by the Franciscan Well. “This light hazy amber beer has a distinct fruit background as a result of our own unique twist!” I'm a big fan of the Well's core beers and the Chieftain, Friar Weisse and Rebel Red completed their line-up on the night.

Time now for stout, after all we are in Cork. And the Cotton Ball make a terrific stout, Lynch’s, in the traditional creamy style. But there’s no shortage of substance, coffee and caramel and a dry finalé, behind the silky smoothness. A pleasure indeed to sink one of these.

Two heads are better than one, according to Jameson, talking about their Caskmates, which has emerged from a collaboration between themselves and the Franciscan Well Brewery.

First, the Well used whiskey casks to brew two beers,  Jameson Aged Stout launched in 2013 and Jameson Pale Ale launched in 2014. The stout-seasoned casks were then returned to Midleton and this whiskey is the result. It has worked well and Jameson are now engaged in similar ventures with some US breweries.

No alteration to the usual Jameson smoothness in Caskmates. Maybe there is a hint of hops there but, back in the dark room, I wasn't paying full attention as I sipped and chatted as the music played. It is a modern easy drinking fruity whisky with a long sweet finish. Quite a lovely finalé to my excellent evening in the City Hall. For the music fans, the night was only beginning,

* My favourite beers, from the fraction that I sampled, were: the Mont Pilsner, Lynch’s Stout, and Sullivan’s Red Ale.

See also: An Ale of Two Families. Brewery Lost in a Bet.

The Beer Nut said…
Maybe it's just the way you've phrased it, but Michael seems to want you to think his beer was brewed at Manor Brewing in Blessington, rather than contracted out to Boyne Brewhouse. The water in Blessington may indeed be perfect for pilsners, but I don't think you were drinking any of it at the weekend. Still a lovely beer though, and definitely better than the mainstream piss!
August 28, 2017 at 9:52 AM

Mancini said…
Michael doesn't 'seem to want you to think' anything, John. In fact 4 out of 5 beers at the GIBF were brewed with Manor's water. If you came over to visit our stand while you were at GIBF, we would have told you that too. In fairness, 'it seems' Billy lifted the water reference directly from our old pop-up banners, which were made in the early days (2014/15) when we did use our Mountain spring water to brew Mont. And we will again, as brewing our flagship beer elsewhere is only a temporary arrangement, whilst we upgrade our Manor Brewery.

Must throw those old banner away, as they have our old bottle image on it too. Thanks for the reminder!