August 23, 2017
Three Wines of Gérard Bertrand
Gérard Bertrand’s company in the south of France now has a total of 14 vineyards. Two thirds or so have been converted to biodynamic and his plan is to make all 750 hectares biodynamique by 2020, according to Decanter (August) 2017),”making this the largest group of biodynamic estates in the world”. L’Hospitalet is their flagship vineyard and, according to the Bertrand website, “the jewel of the Languedoc-Roussillon”.

Gérard was an accomplished rugby player, capped three times by France “A” and played at a high level with local club Narbonne. His love of both rugby and wine was encouraged by his father, a Corbieres grower and a top-level ruby referee.

The majority of the Bertrand wines are the issue of “agriculture biodynamique” and this is one. The fruit has been sourced from the best sites on Domaine Cigalus and the varietals are Cabernet Sauvignon, Cabernet Franc, Merlot, Syrah, Grenache, Carignan and Caladoc - “Bordeaux varietals with local Languedoc varieties" as he told me in Cork last November.

The Cigalus colour is a deep ruby and legs, as you'd expect, are slow to clear. Aromas were aptly summed up by a tasting partner as “yummy plum-y”. It is opulent on the palate, dark fruit again featuring strongly, some spice too. The sun and moon play a part in all vineyard decisions and it worked out well here, leaving us with a celestial finalé. Very Highly Recommended. Try with roasted red meat, poultry “en sauce”, mature cheeses.

Villemajou, planted mainly with Syrah and Carignan, was the family home and is the spearhead of the Boutenac Premier Cru appellation in the low barren hills of the northern part of Corbieres, split by the A61 between Carcassonne and Narbonne. The wines are fruity, spicy and, even when young, have silky and incredibly fine tannins.

The blend in this red is mainly Syrah and Carignan while Grenache and Mourvedre are also used; it spends 10-12 months in oak. It is a fairly deep garnet with aromas of stewed fruit aromas, hints of coffee. On the palate, it is fruity, spicy and silky. Quite an impressive concentrated drop - the vineyard predicts it will age well - and Highly Recommended. 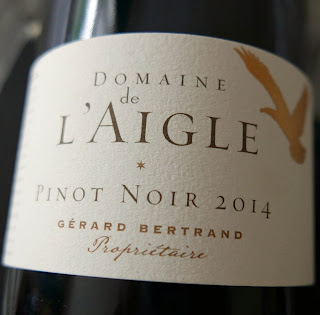 The domaine, at 500 metres, is high for the Languedoc and harvests are later. The combination has its advantages: “..it preserves the aromas of the grapes as well as giving the wine a durability… and maintains a high natural acidity…. The characteristic vinification process focuses on the important effect of wood.. the use of barrels is significant.”

Colour is a mid ruby red. There is an aromatic nose indeed but it is the vanilla that seems to dominate the fruit. So, as they say themselves, the nine months in French oak is significant.

On the palate, it is soft, elegant, fruity and spicy. Must say I was relieved to sense the fruit back in velvety control here plus that matching acidity, all the way through to a long finish. Another well-structured Bertrand wine and another Highly Recommended.
Cigalus Gérard Bertrand Languedoc O'Brien's Wine Wine