Fish Out In Force at the Bayview. Not the usual suspects!


Not the usual suspects!


For me, the humble mackerel was probably the highlight of Chef Ciaran Scully’s Seafood Evening at the spectacularly situated Bayview Hotel last Friday. But there were starring roles too in Ballycotton for less familiar fish, such as Megrim and Witch.

Witch? This is a flounder, known in the UK as Torbay sole. It is caught in abundance around our coasts and about 95% is exported! Megrim, also common, has the sole flavour and a slightly softer texture. The other fish that featured in the six course menu (including a fishless dessert) were Dublin Bay Prawns and Octopus.

The prawns were first up. They were grilled, scented with Rosemary from the garden, shell oil and Atlantic sea-salt, and served with carrot, cappuccino of Bisque, and Leamlara Celery cress. 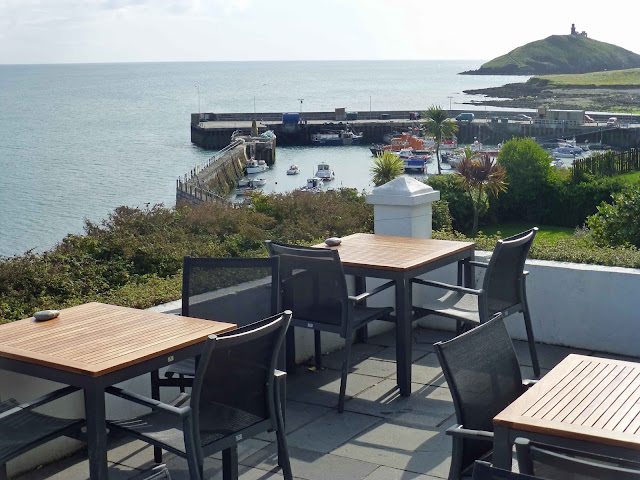 Then came the Seared filet of Mackerel with cucumber, pickled Mushroom, Wasabi cream, dried sea grass, Purslane and sea spinach. Chef Scully says the mackerel haven't arrived in force yet this season but he had some good plump ones here and created a terrific dish.

Time now for the Megrim soup. First came the garnish (Coolea cheese croute, saffron rouille, fennel and tomato) and then the soup was poured, a perfect match. Second time in a week that the soup came midway through a meal. No problem on either occasion! 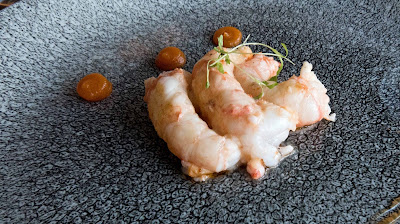 And it was also the second time in a week that I had octopus. This was landed in Duncannon (Wexford) but, like all the other fish, was caught by a Ballycotton boat. The Char-grilled Octopus was glazed with apple syrup and served with sweetcorn purée, chorizo lime and oil, a delightful combination of flavours and textures.

Now it was the turn of the Witch fillet, with lemon and potato purée, brown shrimp, parsley, capers, nut brown butter, samphire. Quite a finalé to the fish dishes. 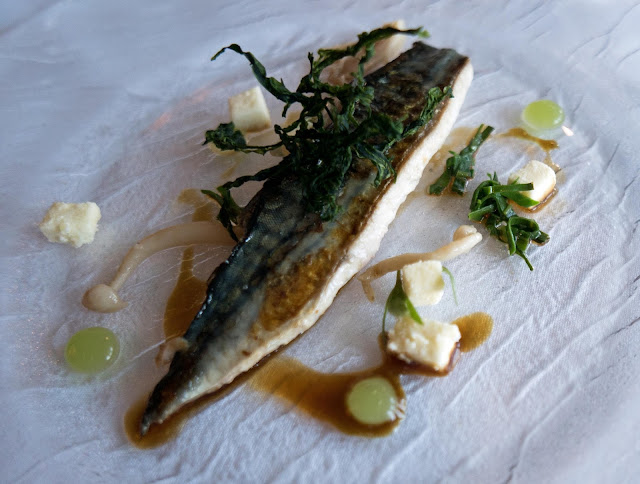 The wines for the evening came from Eno Wine and their Commercial Director Donie O’Brien was on hand to give a brief rundown on each wine, starting with the amazing Pares Balta organic Cava.The family keep bee hives (to assist in pollination) and sheep flocks (to fertilise the vineyards in autumn). When presented with a Cava like this, it is hard to believe that it is still one of the lesser known sparkling wines in Ireland.

That is not the case though with Albarino, which has been gaining in popularity for “past 25 years” according to Donie. And he had a delicious example, the Etra Albarino, aromatic, full of fruit and again that acidity that means its goes well with food, especially food from the sea!

It is often compared to Sauvignon blanc and we soon had the chance to compare as the next wine was Domaine L’Aumonier, an organic wine from the Loire produced by Sophie and Thierry Chardon. A fruity and pleasant wine to taste on all occasions. It is aromatic, well balanced between freshness and intensity and the perfect match for the Octopus and its sauce.

Donie reckons that the Godello grape is becoming ever more popular in Ireland and may well follow Albarino on the way to even greater acceptance here. Certainly the one he had is a gem, a great match with the Witch dish. This was the Celdina from Galicia. Donie says it has the richness and weight of Chardonnay but with a bit more crispness. Beautiful aromas too and, while good with fish, has the wherewithal to “accompany chicken, turkey and pork dishes even when served with a sauce”. 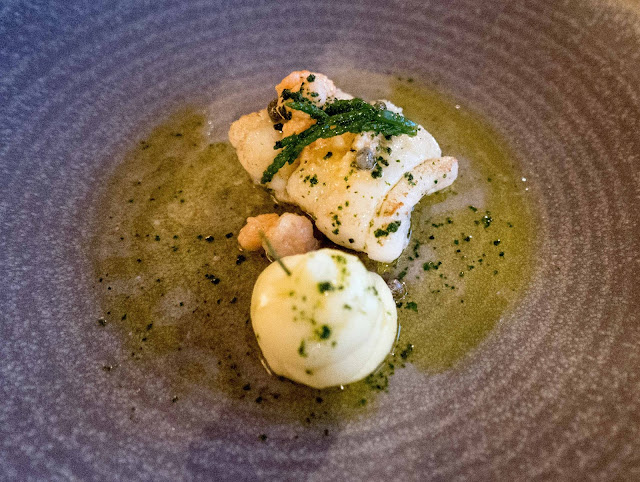 After that it was the turn of the dessert and the Sauternes to bring the very pleasant event to a close.

The fish was finished for the night but I started the next day with more fish. I was staying in the lovely Garryvoe Hotel, a sister of the Bayview across the bay, and was delighted to see plaice on the breakfast menu. Ballycotton Bay is noted for its plaice and this reinforced that opinion. No wine though! The next special food evening in the Bayview’s Capricho restaurant, “Ingenuity and the Bounty”, again seafood themed, is scheduled for Monday September 4th and is also part of FEAST. More info here.
Bookings: 021 4646 746.

Maria Coleman and Chef Ciaran Scully have been filling me in on future themed evenings. Our Portuguese Night – Isaac's Soiree (this date has moved from the 15th of September to the 6th of October) - will consist of a Portuguese tasting menu to include paired Portuguese wines. Keeping it simple there will be no choice! We will also have music on the night."

"Following that on the 20th October we will be having the Bayview Swing- this will be held on the 20th of October 2017. It will be a themed 1920’s event to ease into the Jazz weekend in Cork. A Black tie event/1920’s theme, Full four course dinner, Prosecco and oysters arrival reception, Live music."

"All event are €65 per person and we are doing a special over night to include the above at €110 per person sharing."