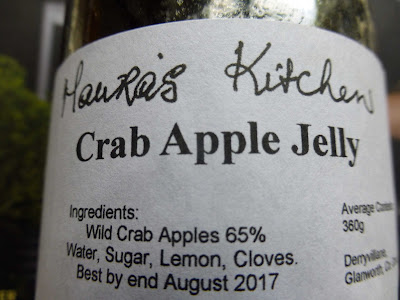 As followers of my football blog know, I do occasionally wallow in nostalgia. Much like everybody else. So, when I spotted Crab Apple Jelly on sale at a recent Killavullen Farmers Market, it was a sure thing that I’d be going home with some of it.

It was that kind of week, a kind of return to the old times. I had to endure a low residual diet for a few days and it was like a blast from the past with Marietta biscuits, Fruitfield Little Chip marmalade, even cornflakes.

But back to the jam. It is produced by Maura’s Kitchen in Derryvillane, Glanworth. “It is a bit runny,” she said. And it was. But a short spell in the fridge more or less cured that. In any case it was hardly a problem as the jar contained a treasure, a delicious blas from the past, and our Taste of the Week.
Crab Apple Jelly Killavullen Farmers Market Maura's Kitchen Taste of the Week