Hops and Glory at LITFEST16. Seven IPAs after breakfast.

May 24, 2016
Seven IPAs on a Sunday Morning
Hops and Glory at LITFEST 2016
“Canning has moved on enormously,” declared beer expert Pete Brown as the Litfest 2016 beer tasting got underway in Ballymaloe last Sunday morning. “It's the freshest way to keep beer”. The session was named Hops and Glory, after one of Pete's books, and he was accompanied on the panel by Caroline Hennessy, co-author of Slainte.

Our first beer was a can of the Yankee White IPA by Rascal’s Brewing. Caroline was happy with this Belgian style IPA: “It’s a lovely food friendly beer, ..feels lighter than five per cent!” Pete says it is now a very popular style. “Every new brewery starts with an IPA”.


Worthington’s White Shield certainly got Pete going: “One of my five desert island beers...not a modern IPA but the only true survivor of the old style that was shipped on 6-month voyages to India and drank like mother’s milk…. This is very hoppy, also very malty, a wonderful balance...gets better with time”. 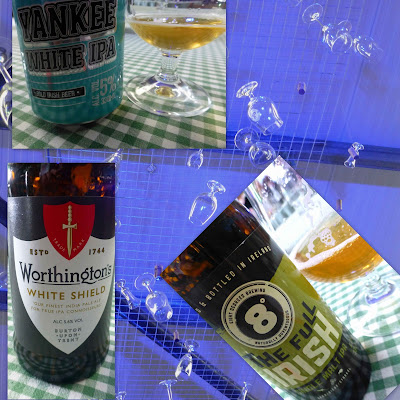 Caroline is part of the 8 Degrees Brewing Company and their Full Irish was next. She stressed the importance of local. They used local barley, malted in Togher (In Cork City). “It is a single malt beer and made to showcase the malt. First made in 2014, it was Beer of the Year in 2015”. Pete noted the hops on the nose, the good balance and equally good body.

Another can followed: the marvellous Ironmonger from Metalman, first launched in 2011. As readers of Slainte will know, Caroline regularly looks for the food angle and praised this as food friendly. “There is a huge change in restaurants,” she said, noting that local food is now being matched with local drink (including beers and spirits).

Pete again admired the body and said he hadn't come across Metalman before but had been enjoying it at the bar in the Big Shed next door. In general, he remarked that one of the best beer tastings you could have is a cheese matching: “Great fun with a small group! Just get a few beers and a few cheeses.” Caroline surprised him when she said she found Crozier Blue and the full Irish a very successful pairing.

On to the next one: Black Lighting from 9 White Deer in West Cork, a style that they agreed involves some “messing with your head”. After all, IPAs are not meant to be black but both agreed it is a wonderful style, Caroline adding that it was a “very American style IPA”.

A little discussion on hops followed. Pete said the character changes from place to place, the influence of the terroir. Caroline advised trying some of the single hop beers available, a good way “to build your knowledge”.

Beer Number Six, the citrusy/grapefruity bottle-conditioned Boundary Pale Ale, came from a Northern Ireland cooperative brewery. Caroline has noted a rapid advance of craft beer in the area, and more: “I would recommend a visit to Belfast...good food and drink.” 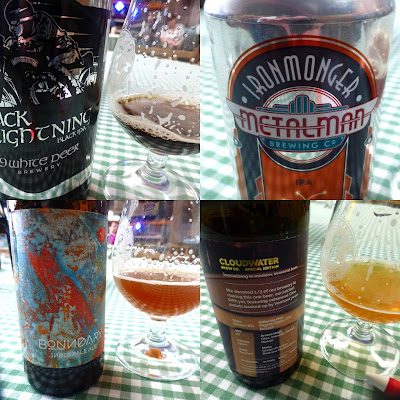 Pete was on a cloud nine as we finished with Cloudwater DIPA v3, a special edition: “This is the most hyped beer, the most hyped brewery..the best brewery in Britain right now….so much juiciness, so much fruit character..all from the hops”.

This weighed in at 9% and Caroline explained how high ABVs can come about. “If you have lots of hops, you need lots of malt to balance. Malt means more sugar and that means higher ABV”.

So applause all round as our expert duo brought the curtain down on an entertaining and informative beer session.