When you listen to Sarah Grubb speak about cheese and particularly about the cheeses that her family produces, including the famous Cashel Blue, you hear passion (and the occasional hearty laugh). But listen carefully and you realise that the passion is built on attention to details, little and large, and on hard work, on experience of course and also on a love for the locality, their terroir, the green fields of Beechmount Farm where their “new” dairy (2010) is located.

If the planners had their way, the building that we (members of Munster Wine & Dine) visited last Friday would have been on an industrial estate. But the Grubbs (including founders Jane and Louis, Sarah’s parents) were convinced that the dairy should be on the farm, in the place where the cheese had been made since 1984 and in the very area where their own workers came from. And, with help from friends and neighbours, that is what happened.

If you’re interested in starting with sheep, you’ll need to know your breeds. Sarah told us that Dorset is best for meat but Friesland is best for milk. We actually started with a taste of sheep’s milk and then moved on to the curds which two recent visitors separately described as like “ a very good tofu”.


“One sunny summer’s day my daughter Sarah and I were watching my husband, Louis, herd his cows in from pasture. What a deliciously rich and creamy milk they gave! I started to experiment. Eventually, in 1984, I created Cashel Blue, a cheese I believe truly represents the outstanding quality of Tipperary milk. I hope you will agree.”


This is Jane Grubb telling how Cashel Blue cheese came into being and we do agree, as do thousands of customers worldwide, from the US to Australia. “All areas of the market are supplied," Sarah told me on a previous visit and, on Friday, she confirmed that they don't put all their eggs into the one basket! This is a deliberate decision, as they want everyone to try their cheese, not just those that shop in elite outlets.
I should of course say cheeses as Cashel Blue has been joined by other products, including Cashel Cream Cheese, a convenient cheese in a tub for everyday use, a mix of Cashel Blue, Natural Cream cheese and 5 per cent cream. The other well known cheese is Crozier Blue, developed in 1993 from sheep’s milk. You may also come across their Shepherd’s Store, a gorgeous hard cheese, and watch out in the near future for Cashel Blue organic. 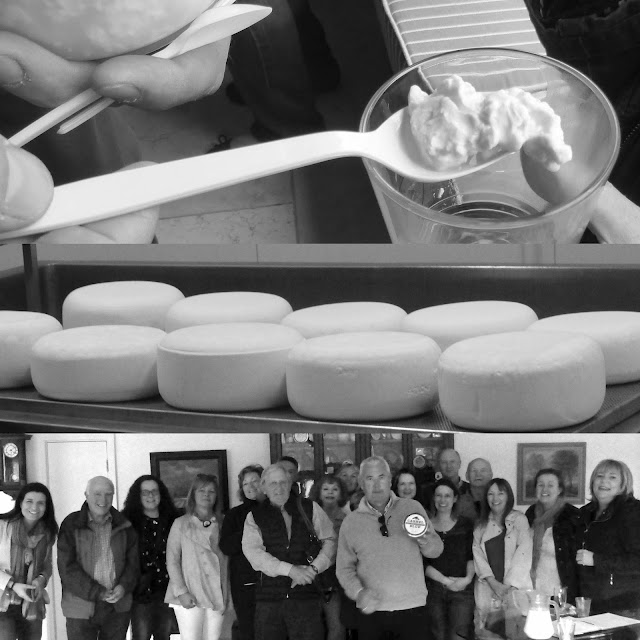 But back to Jane and those early days. She had decided to make cheese but didn’t know how. So she got herself a library book. Even that wasn't available locally and had to be obtained via the inter-library route. That book, lots of experiments and then the acquisition of a small vat, led to the famous Cashel Blue.

Over twenty years later, the new dairy was established near the original farmhouse (which had become almost overwhelmed by the success) and opened right in “one of the best fields” and locally became known as Louis’ shed. Louis is Jane’s husband and the entire family were glad to get their home back.


The early cheesemakers too needed encouragement as they tried to find their way. And that encouragement came in the shape of an early prize (up in Clones in County Monaghan)  and soon they were on the right path, choosing to make the blue rather than what many others were making. “We continue to specialise in blue,” Sarah told us last Friday 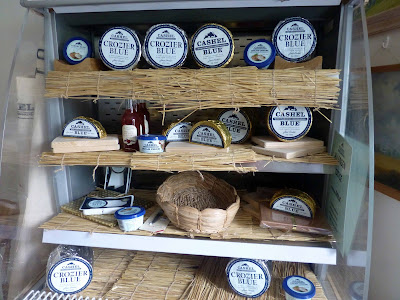 Cheesemaking is no easy job. Lots of muscle and hands-on work is required. Cheesemaking starts at 6.00am and work goes on everyday, though they do try and keep it that bit less demanding at weekends. Still, someone has to be there 365 days a year!

It is hard work too drawing that cheese harp through the curds and whey in large vats time after time; cheesemakers back is an occupational hazard. Not easy work at all and yes that Cheese Harp has to be re-strung from time to time.

With all that hard work, some people would be tempted to cut corners and speed up the process. But glad to say, there is no compromise here. The quality of the milk is all important and the care that it gets from the time it is piped into the vats, through to the final wheels in the Maturation Room, is hands on.

There is of course some mechanical help with placing the curd from the vats into moulds and also with the injection of the wheels to allow the blue to occur and also the turning of the wheels but nothing whatsoever to compromise the integrity of this natural product. Find out more about the Cashel way of cheese making here.


·         Crozier is white while the Cashel as it matures tends to be more of a yellow colour.
·         The sheep milk, used for the Crozier, is heavier and that means more muscle needed especially while it is in the vats.
·         The wheels are salted by soaking in brine, the better to preserve it. Previously the salt was added by hand but soaking in the tanks of brine gives a more consistent result.