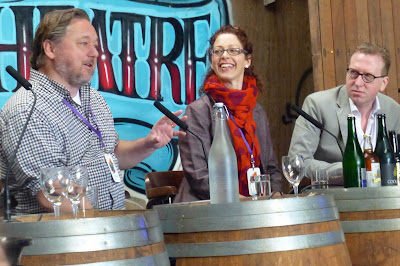 Pete Brown, author of the World’s Best Cider, said the Irish craft cider scene is one of the most exciting right now. The ciders have “high juice content” and the makers “love their apples”. One of the most exciting yes, despite rankling under a very unfair tax regime that would seem to be designed to stifle innovation rather than encourage it.

Take Longueville House Cider Mór as an example. Because producer William O’Callaghan has added a wee spoon of brandy to his basic cider, the tax on Mór is five times the normal. Leslie Williams has raised the general issue many times, saying the current rebate system, which is very good for craft beer makes, is unfair on cider makers. The producers of an excellent wholly Irish product are being punished.

So that's the sour notes out of the way. The rest of this panel discussion, the opening one in the Drinks Theatre at this year’s Ballymaloe Litfest, was focussed on five delicious ciders, five quite different examples, none of which would have been available just a few short years ago.

Pete Brown was joined on the panel by Leslie and by Caroline Hennessy, author of Slainte.

They and the audience were welcomed to the “tractor shed” by Ballymaloe’s Colm McCan as we gathered to hail cider, the drink of the common people for perhaps 2,000 years, according to Pete.

Producer Simon Tyrrell introduced his Craigies 2013 Dalliance. Simon, well known for his wine background, says with Dalliance “we try to express the vinous side of cider”. He mentioned the terroir (Cappoquin Estate, sandstone). The apple blend is fifty fifty between Ekstar and Falstaff, both eating apples, and it spends 15 months on its lees.

Bright fresh fruit with extra creaminess here and you’ll note some cloudiness from the yeasts. Pete Brown said Dalliance proves you can make cider out of eating apples. And this is a good one.

“We use no chemicals at any point” said Rod Calder-Potts as he introduced his organic Highbank Proper Cider 2014. “We encourage microbial activity to counter any malign organisms...Cider makes itself..no sulphites...we put it in a barrell..local yeasts do the rest.”

This was bottled just last week by Con Traas, is 100 per cent apple and naturally dry. Pete loved the contrast between the first two ciders and confessed to being obsessed by yeast, at least with how the yeast converts sugar to alcohol! Leslie reminded us that, compared to beer makers, cider makers get just one chance per year.

And now Leslie introduced yet another type of Irish cider, Cockagee from County Meath. He did mention that there was “devilment” in the name but didn't go into the details. It is keeved, a process common in Brittany and Normandy and explained here on the Cockagee website.
Pete said you can only shake your head with wonder that a process from the 14th or 15th century can still produce a “beautiful natural cider. In a blind tasting, I would class this as Breton and it would be a perfect match with crepes”. Caroline agreed but their hints for crepes went unheeded!

William O’Callaghan, as he introduced his Longueville Mór, disclosed that the first apples in their orchard, planted 25 years ago, were intended for apple brandy rather than cider and that their micro-distillery was the first such in ireland. William, a chef who trained in Normandy, started the move to cider there about two years ago.

The Mór is their regular cider with a drop of apple brandy that “gives it a nice little kick”. It fermented naturally with local yeasts and produced with no sulphite. It went down very well indeed and William is proud of it, quite rightly, “but that tax is a pain!”.  Caroline asked him what food would pair with it. On its own or maybe with cheese was the answer. I had it a week or two ago at a cider evening in Electric with fish and chips. Caroline herself was thinking Lemon tart!
We finished with the limited edition (6,000 bottles) Stonewell Tawny 2014. Daniel Emerson told us all about it: “it is a chapitalised dry hop cider..the natural sugar is supplemented with additional sugar and this raises the ABV… minimum aging is 12 months and there is an extraordinary range of flavours over the 12 months”. Lots of tasting, no doubt!

At the end of the process, the cider is “very sweet, like an apple ice-cider”. They decided to counteract this by passing it through Eldorado dry hops. The result was very good and the Tawny has “proved remarkably successful.” And we could all see why. Pete was delighted with it saying it reminded him of a Canadian Ice Cider, “beautiful’.

Overall, it was a great reminder of how far Irish Cider has come in a few years. Perhaps next a tasting of these five might be arranged for the Dail bar and a few home truths delivered at the same time, in the nicest possible way of course!