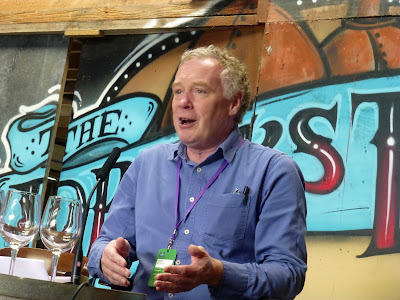 We got a little more than we expected at John Wilson’s Islands in the Sun, a talk and tasting on the wines of the Mediterranean Islands - one too from the Canaries. As the Irish Times wine-writer took us gently through the wines, a thunder-shower played drums on the roof of the Ballymaloe tractor shed. “Just as well they water-proof their sheds in Ballymaloe,” joked John before getting back to his fascinating tasting.

He told us it was an idea that came to him about eight years ago but it was hard to get the wines together. “I’ve always wanted to do this but Litfest gave me the chance and I left the legwork to Colm.” He was, of course, speaking of Colm McCan,  the man behind all the events in the improvised Drinks Theatre.
“There are a lot of island wines,” said John. “They have their own varieties, characters and styles. All are on trade routes, lots of them volcanic and most have never had phylloxera.”

Not always easy to find white wines with good acidity from hot climates but John had one from the historic island of Santorini. “It is volcanic..the grapes are grown high up in circles around the top of the craters. They are ungrafted. The rootstock must be ancient. The acidity is there, needs food and is great with scallops.” The wine is Assyrtiko by Gaia 2015, a leading producer, and it is a wild ferment. 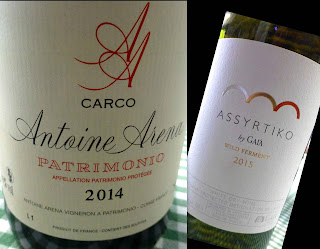 Next we landed in Corsica, Ile de Beauté. John hadn’t tasted this Vermentino until now. “It keeps the acidity, lean and fresh, amazing flavours. It is single vineyard, aged in old barrels, no new oak used.” The producer Antoine Arena has quite a story to tell. The vines are tended biodynamically and the wines are made naturally. Vines and Wines says that crisp lemony Vermentino is Sardinia’s original gift to the wine world.

South now to Sicily and the first of the reds, a blend of Nero d’Avola and Frappato (a soft low tannin grape), a very light coloured red by COS who farm in Vitoria. Sicily produces large quantities of wine.


John is well acquainted with this one: “It’s been a favourite of mine for 15 years. This is a new vintage, with some tannins. The vineyard is biodynamic and was the first place I saw amphora being used.” He advised decanting the wine.

Back north again now and a visit to Sardinia, to a natural winemaker who doesn't follow the market. “I make wines that please me,” he told John in an interview. “They are what they are.” Kinda take it or leave it. If you take it, remember these are not filtered, nor fined, so decant. 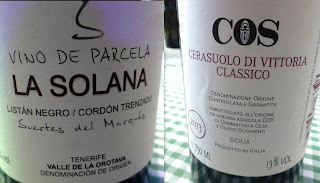 Tenute Dettori’s Romangia Rosso is another favourite of John’s: “I adore this wine. It has evolved so much from last year! I think natural wines are fascinating. This is an earthy, warm delicious red fruit with a lovely acidity.”

So we waved goodbye to Sardinia and headed through the straits on a long trip to the Canaries which produces quite a lot of wine. “There are 11 areas of production..a couple available in Ireland but not enough”. Then that massive shower interrupted, letting us know that we didn't quite fit the island in the sun label, though in fairness, the weekend of the Litfest was generally very good, lots of sun, as usual!

After the din on the roof, we returned to the wine. “The vines are grown in hollows to protect them from the winds. The Canaries were a stopover for ships heading to the New World and this grape, the Listan Negro, eventually made its way to Argentina (as Criolla), Chile (Pais) and California (Mission).
Our 100% Listan Negro is from Teneriffe: Vino de Parcela La Solana. It is produced from vines over 100 years old, has been foot-trodden in open concrete tanks and local natural yeasts are used. “There is a savoury liquorice touch to it and they tend to get the purity of the fruit across.”

“This is special,” said John as he guided us back to the Med and the island of Pantelleria, between Sicily and Tunisia (to which it is closer). The island is famous for its capers! Just one hotel and that is called the Dream Resort. Soil is again volcanic and again the vines are dug into the ground to avoid the worst of the winds.

Donnafugata Ben Ryé Passito de Pantelleria is the full title, I think! John said the grape is the Moscato di Alexandria but under a different name (Zibibbo) and during a prolonged fermentation some bunches of dried grapes are “thrown in” from time to time. “It is incredibly sweet, marmalade-y, yet with great acidity”.


Muscato is grown on virtually all the islands of the Med and found, in one variation or another, all over the wine-growing world. Passito refers to dried and shrivelled grapes.

A sweet ending indeed to an interesting multi-island tour and he hinted that he might well come up with another voyage next year in LITFEST.
And, yes, the sun was shining on this island as we joined the throngs milling around in Ballymaloe.

Hops and Glory. 7 IPAs after breakfast.