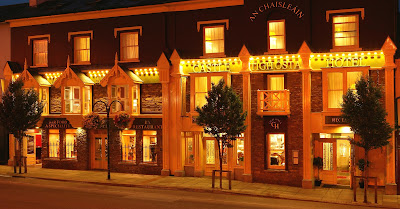 The prestigious awards which are the largest in the country are run on an annual basis by the Restaurant Association of Ireland (RAI) and are highly sought after by industry professionals. The ‘best customer service’ award recognises establishments who go beyond the call of duty in a consistent and industry appropriate manner.
Owner, Don Buckley said “The Irish Restaurant Awards are renowned for recognising and rewarding achievement and excellence within the Restaurant and Hospitality industry. It is a lovely surprise and boost for management and staff. It will spur us on in continuing to exceed customer expectations- after all customer is king!”
The Castle Hotel is no stranger to awards was recently ranked 12th within the top twenty five hotels in Ireland in the “customer service” hotel award category by the world’s largest travel community, Trip Advisor. Other accolades include a Certificate of Excellence for 2011 and securing best “bargain” and “family” hotel in 2012.
Industry category nominations will be judged by the National Awards Academy in late May and independently assessed by KPMG. County winners will then go on to compete for the Regional and All Ireland title which will be announced in the Burlington Hotel on 10th June 2013.

Laurenz V Charming has been crowned number one Grϋner Veltliner at a recent ‘Generation Grϋner’ blind tasting event held at the Shelbourne Hotel.

Organised by Dieter Hϋbler and Laurenz Maria Moser, partners in Austria’s Grϋner specialist producer Laurenz V, Dublin was the forth leg of the Generation Grϋner tour to be held all over the world, preceded by London, Zurich and Vienna with further tastings planned for Dubai, Hong Kong and Asia later this year.

Laurenz V Charming beat 23 other wines from eight countries including Austria, Germany, France, Australia, New Zealand, Slovakia, USA and the Czech Republic. This same wine came second in London so went one better in Dublin to take the title!

The top five Grϋner Veltliner wines resulting from the blind tasting in Dublin were:

The wines were scored out of 20 and the scores for each wine were tallied at the end of the tasting. The judging panel included seven of Ireland’s respected wine journalists as well as Julie Dupouy, Ireland’s Sommelier of the Year 2012.  Austria has now claimed the best wine on two occasions tying with Germany who has also claimed two victories.

Laurenz Maria Moser of Laurenz V said: “We are delighted that LAURENZ V Charming has taken the Generation Grϋner title in Dublin. We are happy to have started this initiative to evaluate the different styles of Grϋner produced around the world, and to find out what might exist beyond the Austrian styles. Having a look at the development of Grϋner on a world scale might help to broaden the horizon for Austria’s Grϋners.”

Elke of Bia Sasta tells me that Kitty is returning to The Cottage of Bia Sásta, to continue “to share her skills and knowledge with us to ensure that we all have a fab kitchen garden. We will learn how to transplant seedlings, how to plant directly, how to keep weeds at bay and how to enrich your soil. All this is topped with a lunch prepared by me and I have planned something nice for you. You will go home with a pile of new knowledge, information material, a full tummy and a little gift. If you like to join us on Saturday, 11th May at 10am near Grenagh, please email me on biasasta@hotmail.com to reserve a place for €20 inkl. all the above.”

Ben & Jerry on Tour! Ben & Jerry’s flavour fans will get the chance to experience the new flavours in the most delicious surroundings as The Core Tour returns to Dublin with not one but two events in Dublin on the 9th & 11th May. The Core Crusader van will hoof it to two locations alongside a brand spanking new Ben & Jerry’s barn area, where fans can enjoy their chosen scoop of their favourite Core flavour while chilling on hay bales, enjoying the sunshine and listening to top tunes from some of Ireland’s best up-and-coming bands! Get all the details here.