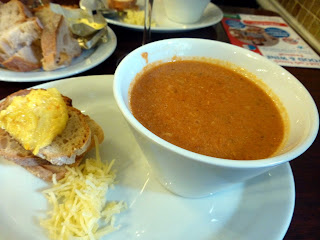 Didn’t realise until almost too late that so many of the city’s restaurants were joining in the fun of the second Cork French Food and Wine Festival. Among them were Les Gourmandises who had a Roasted Duck Leg Confit from the Landes area; Cronin’s of Crosshaven were doing a Bouillabaisse; The Farmgate presented Blanquette de Veau while Star Anise might have had the inside track with Saddle of Rabbit from Lyons.

We ended our festival weekend on Saturday in Nash 19 who had also entered into the spirit and were indeed offering some good French wines at an attractive price (€4.50 per glass of a Sauvignon from Bordeaux).

By then, the Very Classic French Onion Soup had sold out but they did have a gorgeous Soupe de Poisson avec Croutons, a really flavoursome bowlful (a large one!), the fishy flavours mild, the texture smooth. 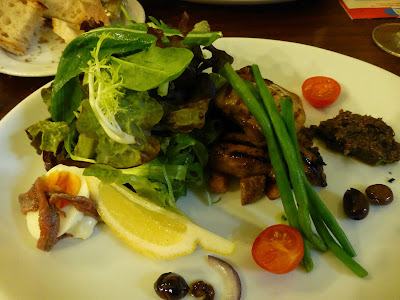 On then to the piece de résistance, the Salade Nicoise au Seared Tuna, dish of the Cotes d’Azur. I believe though that the citizens of Nice can hardly agree among themselves on the exact recipe for this traditional dish with some of the traditionalists saying you can’t have anchovies and tuna together. In England, the preference seems to be for canned tuna while here (and in the USA) we seem to relish the seared tuna.

All the arguments though, which probably apply in some shape or form to all traditional dishes, were far from our minds as we tucked into this splendid Nash 19 version which also featured the traditional hardboiled egg and one of the freshest and crispest salads you are likely to find. The tuna, by the way, was perfectly cooked, tender and moist, and polished off with some relish. 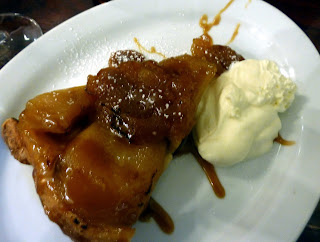 The French theme continued right to the end and dessert, a luscious Apple Tarte Tatin, was a superb example of the type. Apparently it was invented by a lady called Tatin by mistake. Jamie Oliver tells how: it was invented quite near where I was staying by the Tatin sisters. The story goes that one of them was making an apple tart but, for whatever reason, made a mistake and left it too long in the oven. However, she thought she could salvage it, so she ended up turning it upside down and her guests went mad for it.

Actually Jamie has a recipe for it here.  Don’t think that Nash 19’s Donna will need to look it up though. Her Tarte Tatin is perfect!