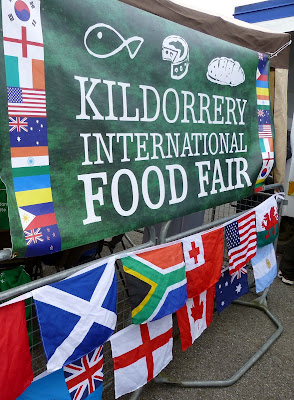 The Fair was held in the local schoolhouse with ample parking across the way in the GAA Grounds. There was a fiver charge for admission and for that you were supplied with a bowl and a fork/spoon and a wristband that entitled you to get into the main room and eat all you could get.

The place was packed with most of the punters willing to try out the exotic as well as the local food on offer. By the time, my round was finished, I was delighted to see a cup of tea (or coffee) on offer in an adjacent room and I enjoyed that very much along with a bun (all for just two euro).


Hard to take pics in such a crowded situation but managed a few.

Caroline@Bibliocook said…
So sorry that I missed you there, Billy - never even made it into the cup-of-tea room, too much food to negotiate beforehand! Delighted that you made it along. The lads that put it together always do a great job and I love the fact that it's a real family and community food festival. Roll on 2014!
May 20, 2013 at 11:20 AM

Caroline@Bibliocook said…
So sorry that I missed you there, Billy - never even made it into the cup-of-tea room, too much food to negotiate beforehand! Delighted that you made it along. The lads that put it together always do a great job and I love the fact that it's a real family and community food festival. Roll on 2014!
May 20, 2013 at 11:21 AM