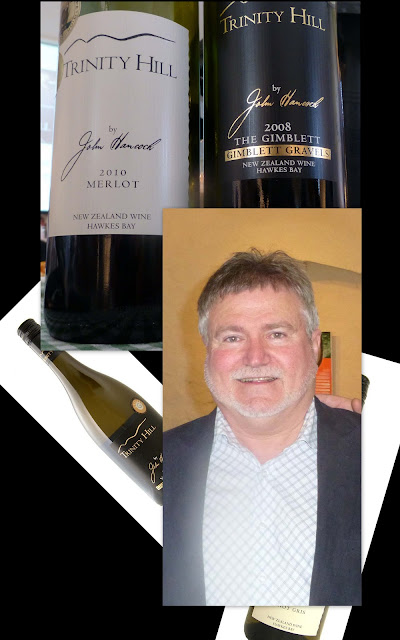 Sunday afternoon’s trip to Ballymaloe  proved to be a very rewarding one. Not alone did we taste some terrific wines from New Zealand but we were entertained and educated by two of the beautiful country’s top winemakers, Larry McKenna of Escarpment and John Hancock of Trinity Hill.

Ironically both are Australian and went to High School together. They later combined in an early venture in New Zealand before going their separate ways. They are still great friends and a terrific combination at evenings such as this.


While John recognises the importance of terroir Larry, also known as Larry McPinot, is “unashamedly a terroiriste” and tries, very successfully, to emulate Burgundy.


The pair were introduced to the Grain Store audience by Anthony Tindal of the Tindal Wine Company, their distributors in Ireland. John told us that Trinity Hill has been established for just 15 years as he introduced the first pair of his wines.


The first up was the Hawkes Bay Pinot Gris 2011. Beautiful aromas, “Turkish delight!” John said. Even though the wine is a dry one, it has a magnicient texture and fullness and “makes food look good”. This is perhaps the best Pinot Gris I’ve tasted.


Then we tasted the Gimblett Gravels Viognier 2011, another standout wine and again one of the best Viogniers I’ve tasted. Loved its apricot and floral aromas, the rich and soft texture. John recommended trying it with Asian food.


The first of the Trinity Hill reds followed, a Hawkes Bay Merlot 2010, 87% Merlot to be exact, the balance of the blend shared between Cabernet Sauvignon and Cabernet Franc. This, with an abv of 14%, is “more about the fruit. It was a very successful year. This is good value and a great seller in New Zealand. Try it with lamb and rosemary.”


The next wine, the Gimblett Gravels ‘The Gimblett’ 2008, was built to last longer than the Merlot. Is uses the traditional five varieties of Bordeaux (Cab Sauv 43%, Merlot 41%, Petit Verdot 7%, Malbec 6& and Cab Franc 3%).


“The fruit is from low yielding vines. It is more intense, more concentrated. It is made to age and needs it. It spends 18 months in oak, has good depth, is well balanced and will age for another five years. A food wine!" 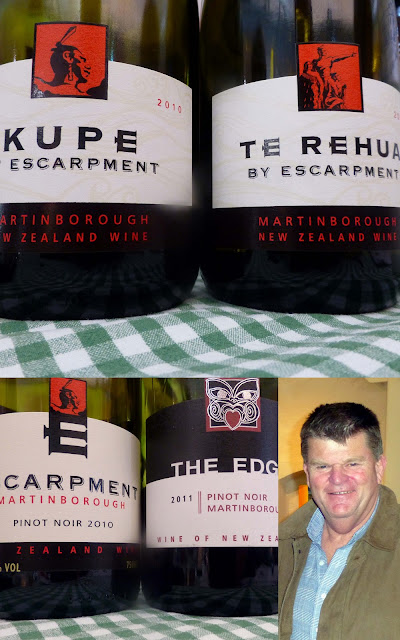 All along the evening, the pair had some good discussions and good answers to questions from the audience. Larry told us that almost all the wine is made on the sheltered east coast as the NZ weather comes from the west, just like Ireland’s.

John explained that tannins come predominantly from the skins, also from the seeds and pips, and give the wine that grippy feeling while Larry said that, without tannins, wine has no backbone.

While Larry grows Pinot Gris, Pinot Blanc and Chardonnay on the Escarpment, the site is “a great place to grow Pinot Noir”. It is a bit of a Prima Donna – Larry described it as genetically instable – but he does very well with it, as his four examples underlined.

First up was Escarpment The Edge, Martinborough 2011. “No oak, simple..fruit driven..for immediate drinking.” Simple maybe but still full-bodied and with a lingering finish.

The Escarpment Pinot Noir, Martinborough 2010, was a “step up in quality” “it was a good year, very healthy grapes...we picked when we wanted to pick over a number of sites. This is what we call a district blend and a fantastic example of what we should be doing.”

The first two were good but the second two, each from a single vineyard, were even better, described as absolutely beautiful by Anthony Tindal and virtually everybody else I spoke to.

The Escarpment Te Rehua Pinot Noir, Martinborough 2010, showed how well Larry emulated Burgundy, though his site has its own characteristics of course. Made from 25 year old vines the wine showed unique complexity along with the usual black cherry and plum flavours.

Really good and then came another gem: Escarpment Kupe Pinot Noir, Martinborough 2010. “The density of planting in this vineyard, our oldest, is similar to Burgundy” and the wine was ”impressively velvety and supple...huge concentration of flavour...I am very happy with it..and really looking forward to seeing the Kupe in 25 years time!”

Nice stories too behind the labels and you can read all about them here. For more info on John’s wines check Trinity Hill.

Alain from the Vanilla Grape in Kenmare enjoyed his trip to Ballymaloe and he stocks the wines. There is a discount available at present and to see more about the wines in Ireland check Tindal Wines. Remember when using the internet that while a company may have with 100s of wines in stock, they may not all be listed on the site; sometimes you may have to phone.
Ballymaloe Escarpment Kenmare New Zealand Tindal Trinity Hill Wine

Tindal Wine Merchants said…
Thanks for the glowing report Billy - was sad to have missed the evening.

Wines will be up on our site in a matter of hours....

Hope to catch up with you at one of these events soon... are you going to Friday's dinner at Inchydoney?

Cork Billy said…
Sorry, I won't be in Inchydoney. Enjoy! Had an excellent buffalo meal recently in the Mills in Ballyvourney! See post http://www.corkbilly.com/2012/09/buffalo-tasting-at-mills-inn.html
September 19, 2012 at 10:05 AM