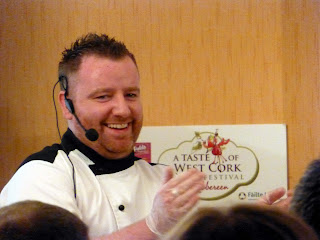 
Donegal man Garry O’Hanlon came out in top in the Celtic Cook-off at a packed ballroom in the West Cork Hotel (Skibbereen) last night. MC John McKenna said that all six chefs were winners but Garry got the nod in a very tight contest.

The ‘Ready Steady Cook’ style cook off style event saw the master chefs split in to two groups where they each had just thirty minutes to impress the judges using West Cork artisan produce and one ingredient from their home turf. They were also assisted by three young aspiring chefs to help them with preparation and serving.

O’Hanlon’s dish of Loin of Hill Lamb, with bone marrow and wild artichoke, etc, and enhanced by, among other things, West Cork Garlic with honey, just won the favour of the judges who commended Garry on his use of Irish and local ingredients.

Speaking of the event, Neil Grant, General Manager, West Cork Hotel said “We were thrilled to host such a successful night again this year. The Celtic Cook Off has become a landmark food event for the Celtic regions of Northern Europe since its inception last year and we at The West Cork Hotel are proud to play host to the region’s finest chefs."

He continued, “The Celtic Cook Off opens new doors to local producers and extends the export potential of their products. They also have the chance to promote their fare to top international chefs and be recognised as the “go to people” for the best artisan produce in the world”.


A Taste of West Cork Food festival continues until this Sunday with a number of highlight events still to come including an intimate concert with Declan O’Rourke on Saturday night, many free cookery demonstrations throughout Skibbereen and the finale event of the harvest country fair on Sunday with more than 100 local producers exhibiting their artisan products.
• We’ll have more on the event in the next few days!