Some of the top food producers and suppliers in West Cork were gathered in the ballroom of the West Cork Hotel in Skibbereen last Wednesday as part of the week long A Taste of West Cork festival, specifically there in the morning so that the visiting chefs for the evening’s highlight, the Celtic Cook-off, could sample and choose from the produce.

Delighted to get an invite to the morning session and meet up with some old friends from the markets and also meet some new ones. Manning’s Emporium  from Ballylickey had a stand groaning with some of the best cheese around: Durrus, Coolea, Gubbeen, Fermoy etc. and Val and Andrew were in top form. More top notch cheese too at the Milleens stand where Quinlan Steele was on duty.

Frank Krawczyk, a citizen of the world who loves his West Cork home, is one of Ireland’s best known salami and sausage makers. Loved his Bresaola and his treatement of a shoulder of pork, both tasty and moist, not to mention his cured ham. Frank, based in Schull, gives regular demonstrations at Ballyvolane House and O’Brien’s Chop House. 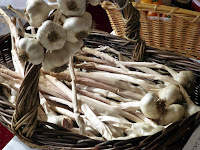 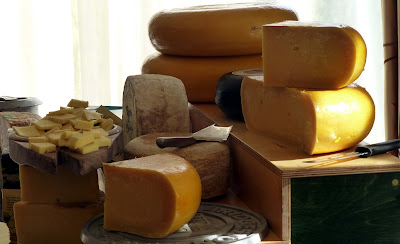 Axel and Marye Miret are the couple behind West Cork Garlic  and their product was used by winning chef Garry O’Hanlon. Caroline Hennessy was on the 8 Degrees Brewing stand and she was displaying the full range of their popular beers. Saw the ale again on the Friday, on tap in Cork’s latest craft beer pub, the Hub in Anglesea Street.

Two of the four people on the Celtic Cook-off working group, Avril Allshire of Rosscarbery Recipes and Sally Barnes (“the greatest fish smoker in the country”, according to one Tom Doorley) of Woodcock Smokery were both busy at their stands.

Lingered also at the Skeaghanore West Cork Duck stand, for the conversation and also for a sample or two. Here they like to keep it simple, natural and additive free. Read all about this wonderful product here.


The chefs had been down to the coast earlier in the mornings so there was no fish stand in the ballroom but the sea wasn’t forgotten as we met Sally McKenna of Bridgestone Guides and Jim Kennedy of Atlantic Sea Kayaking.  They had a very impressive display from the sea and the shore including Dilisk, Carrageen Moss, Sea Spaghetti and Wrack and more. Tasty stuff too and Masterchef winner Tim Anderson was shopping there.

Got to most of the stands but missed out on a few, including Brown Envelope Seeds. All of the suppliers were back for the Cook-off in the evening and the stands were kept busy as hundreds of people squeezed in.

A few more producers came too, including Glenilen and Matson’s Wine and Food Store of Bandon who, with Searson’s, were supplying the matching wines for the cook-off meals. Matson’s are offering 20 per cent off on the show wines for the next while. I got a taste of one of them, the Vallado from the Douro, a terrific red, easy drinking and delicious.

All in all, a great experience that underlined once again the quantity and quality of the producers in the area. And, another thing, these are friendly folk. So why not put the festival in your diary for September 2013. You won’t regret it!
A Taste of West Cork Food producers Skibbereen