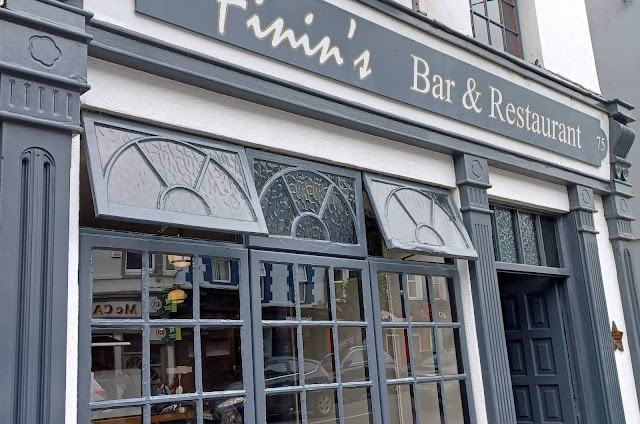 A lesson on the double from my first visit to Midleton’s Finín’s after its recent takeover, and make-over, by Kinsale’s Blue Haven. In the same way as you shouldn’t judge a book by its cover, you shouldn’t judge a dish by how it looks. Even if the dish does look laid as the French say or moche as their teenagers would put it or just plain berk as the more outspoken might emit.

Let me start at the end, with the dessert, a Tiramisu. It came in a little bowl and looked like an emoji that had been badly designed. Yet it was superb, one of the best we’ve come across in recent times. Just seemed to have all the correct ingredients and it was sensational on the palate. Perhaps a presentation in a glass would have improved the initial impression but I wouldn’t worry too much about it.

And the other less-than-good-looking dish also provided a very happy outcome. This was the French onion soup (below), looked rather muddy in the bowl, but turned out fantastically well, sweetly delicious, another that was one of the best of its kind tasted on a long long while. A very big thumbs up here or, as the French might say: C’est vraiment très bon or perhaps just Miam! (Yum!).

Both dishes came from the specials board on the night and indeed the vast majority of our meal came from that board, though they do have quite a choice on the regular menu. We got a warm welcome and were soon seated downstairs - upstairs will not be ready for a few weeks yet. The bar, with its full length mirror behind, looks inviting and that was even more the case when I saw a tap for Black’s Kinsale Pale Ale, an excellent local beer and a favourite of mine.

In face they have quite a choice of other craft beers in bottle including Porterhouse, Kinnegar and Galway Bay and also cider by Stonewell from Nohoval. Local producers are also supported when it comes to food and their suppliers include Horizon Farms in Kinsale, Harty's Cheddar, West Cork Olives, Ummera Irish Smokehouse, Cliona Dairy, Gubbeen Smokehouse, Jim Crowley's Butchers & Ballycotton Seafood (just across the street in Midleton).

It was a busy evening but the friendly staff did well, gave us a few tips when we were choosing and all worked out fine. Our other starter was from the regular menu: a deliciously crunchy Tempura of Broccoli, served with basil mayo and crispy Parma Ham and parmesan.

Mains include Wild Mushroom Tagliatelle, Smoked Chicken Caesar salad, and Catch of the Day. We could see from the dishes coming out from the kitchen that their Burger and Fish and Chips are very very popular indeed.

On the Specials, we picked the Seafood Salad, Samphire and burnt lemon but our server explained it was more like a seafood medley and immediately the board was changed to a Seafood Selection. That came with a helping of fries and went down well indeed, especially the mussels and also the min-portion of Fish (cod) and Chips.

My choice was the Toulouse Sausage dish, with Thyme mash, roasted parsnip, black pudding and red wine jus. Flavours were excellent though. I had been expecting a heart rustic dish and that was exactly what I got. Fairly priced too at €16.50 as was the Seafood Selection at €18.90.

They were just into their second week after the opening under the new owners but, with many of the staff retained, they were going well, off to a good start. Finín’s will be worth keeping an eye on in the months ahead, especially with an experienced and respected chef as Pat Kiely (ex Les Gourmandises) at the helm.