Stunning Vermouth by Bodegas Robles and a gem from Ermitage 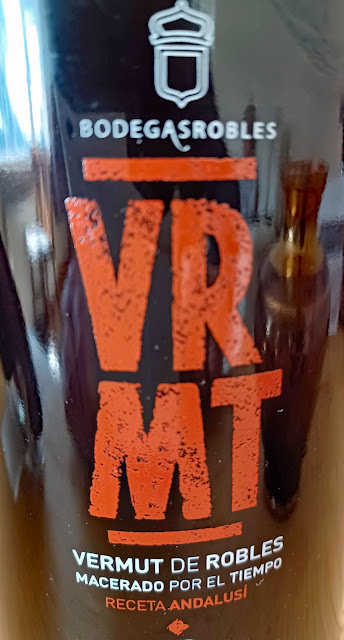 Amazing aromas with strong hints of the Oloroso sherry base and a “top-up” of Pedro Ximenez. Layers and layers of flavours on the rich palate, an appealing blend of freshness and maturity. The ten aromatic plants foraged in the locality have their say . An amazing liquid with a superb balance of sweetness and bitterness with the acidity playing a key role as the caravan of flavour rolls on and on to the heavenly finalé.

And we owe this taste of the past and the present and perhaps of a future paradise to Bodegas Robles and Michelin-starred chef Paco Morales who have produced this luscious vermouth with Robles’ 8-year old Oloroso as the base, and then that later light touch of the PX. The aromatic plants add a sense of terroir while other Paco additions such as clove and cinnamon echo the cuisine (of the Moorish Al-Andalus period (8th -15th century), all adding to the sense that this is indeed a special one!

Pairings recommended by the producers are:
A good pairing for nuts, fruits such as orange or lemon, a cheese and raspberry cake. Any sea food and all kinds of fish: tuna, cod, salmon, anchovies. It's perfect with sweet flavours, especially those with more sweet and dark flavour. Olives, cheeses, ham, sausages, smoked meats, mussels, clams.

I did try the vermouth with Macadamia nuts and Valencia almonds, each from Olives West Cork (via Neighbourfood). The suppliers say “addictive and really shouldn't be shared, these Spanish Almonds are crunchy and far superior than the typical almonds on offer. Lovely on their own, in rice dishes tossed with fresh herbs, salads or breads.”

The macadamia nuts come from Australia and are “top grade”. Crunchy on the outside and softer on the inside. The soft, buttery core immediately gives you an idea of it's oily content with 85% mono-unsaturated fatty acids. Quite delicious indeed.

It also paired very well with the creamy Wicklow Bán, a Brie, not so well with a Dunnes Stores extra mature Cheddar (not a reflection at all on the quality of the cheese).

Very versatile, as you can see. But enjoy it too as an aperitif, 40ml or so over ice, is a lovely introduction before sipping it neat with any of the above. I also found it makes a superb Negroni with the usual suspects Gin and Campari, each accounting for a third of the drink. Still experimenting - just as well it comes in a one litre bottle! 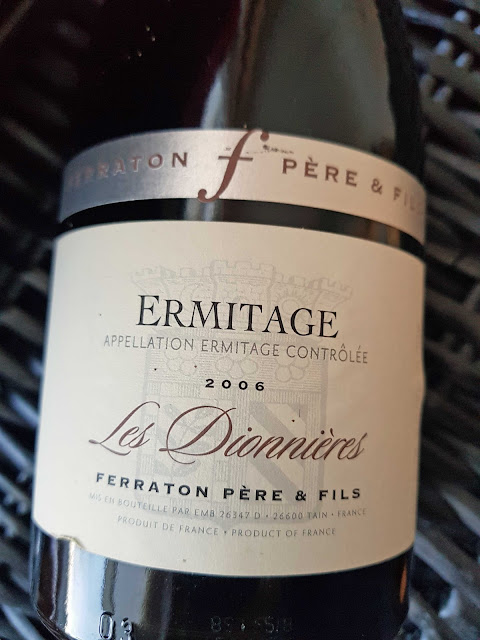 Deep ruby is the colour with a lighter rim. Aromas are engaging from the minute you extract the cork (this one has been in place for 16 years!). Lots of dark fruit for me but also a floral cloak (violets). Amazing on the palate, complex. With a gentle power. The aromas continue of course and those fruits and spice are echoed on the palate. And the finish, with that spice outstanding, just goes on and on. Very Highly Recommended.

The Ferraton wine story begins in 1946 in the Rhone Valley with Jean Orëns Ferraton, a vigneron, and son of a vigneron. Michel, his son, inherited the same passion. He decided to give a new dimension to his father’s vineyards and that began in 1998 when Michel Chapoutier, a close friend of the family, shared his know-how. And from the old traditional ways, a path is laid to organic viticulture. An audacious step for Maison Ferraton Père & Fils.

Wine Folly say “the hill of Hermitage is famous for its emboldened Syrah wines that usually need around 5–10 years before you open them”. Reckon I timed this one fairly well. Probably too late to get your hands in this one now but the 2009 and 2010 are worth looking out for.

They continue: “Wines from L’Ermitage do not come cheap.” Ermitage? We need to reverse here, about 1,000 years. An ex crusader had become a hermit on the hill and so it was called Ermitage (meaning hermit’s hill).

But when the English came, it seems their tongues couldn’t quite handle Ermitage so they added the H. And the new name stuck and is still with us though the old name will appear on some labels as is the case here.

And then there’s Crozes-Hermitage. This is a larger area bordering the famous hill but without the hill’s favourable exposure to the sun and its wines are not as highly regarded. In good harvests though, the Crozes wines can be great value.

Speaking of names, the grape is known as Shiraz in Australia where it is the second most planted red variety. France tops the world rankings for the amount grown with Australia in second spot.

Aside from Syrah, the number one crop in eight of the Northern Rhone’s crus, the other famous grape here is Viognier, about the only grape grown in the other two crus, Condrieu and the minuscule Château-Grille.

SOIL - Clay and limestone, with round pebbles at the surface.
South facing.

VINIFICATION - Grapes are destemmed. Maceration in concrete vats, used to slow the change in temperature, for about four weeks (depending on vintage). Extraction made by pumping over and punching down.