A Quart of Ale± #112. On the craft journey with Third Barrel, Kinnegar, Clonakilty and Trouble Brewing 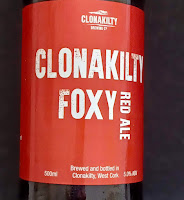 A Quart of Ale± #112
On the craft journey with Third Barrel, Kinnegar, Clonakilty and Trouble Brewing 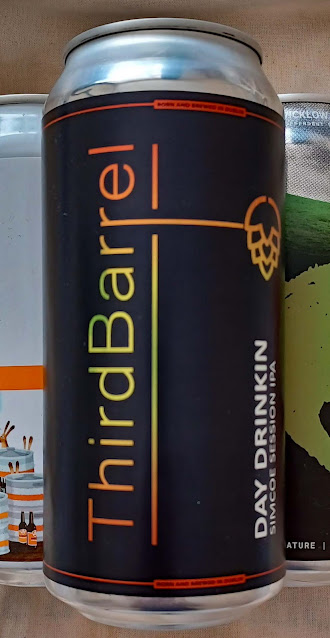 Day Drinkin is the first of a series of “summer slammers” by Third Barrel. It’s a hazy lemon colour with a soft bubbly head that loses volume slowly. And with Simcoe taking the solo hops role, you can expect aromas of citrus and pineapple.

And it starts with the nose, pineapple and orange zest popping out of the glass. And more of the duo on the palate as the engagement gets a little more serious (in a good way!). No letting go now, as Wayne Wonder might have sung. Well he did sing it:

Got somebody she's a beauty

Take good care of me like it's her duty

Want you right by my side night and day.

Not too sure about night and day but Day Drinkin, at the 4% abv, would certainly make for a good session, night or day. As they say themselves: “be sure to pick up a few for your next bbq, camping trip or even just sitting on your own in the kids paddling pool.” 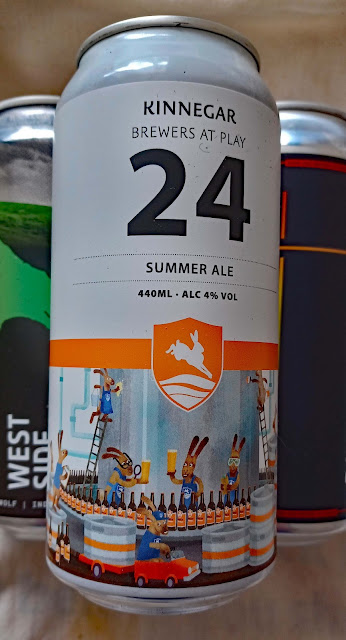 Colour is close to lemon, topped by a soft foamy head that sinks slowly. And a soft citrus breeze wafts up from your glass. This is summertime and the soft and supple citrus continues its merry way on the palate.

You deserve refreshment at the end of a hard hot day and this Donegal Summer Ale opens the door to a relaxing interlude whether in the newly opened Kinnegar taproom or in your own back garden. And, at four per cent, you and your buds could well have a summertime session. It’s a won won situation as someone might say.

One thing that is not immediately apparent, not that anyone is trying to hide it mind you, is that this beer, number 24 in the excellent Brewers at Play series, is a wheat ale. But be aware too that this is a once off. You get one chance. Jump aboard and sip in that rounded citrus experience.

They say:“Brewers at Play presents new beers designed to keep our brewers on their toes and our customers on their tenterhooks.” I say: “Keep ‘em coming!” 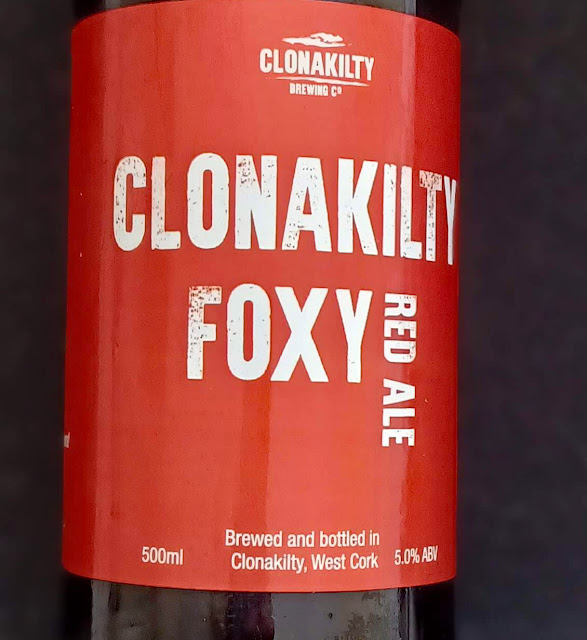 Clonakilty’s “fierce” independent brewery are the producers of Foxy, a Red Ale. They have stopped short of proclaiming it as an Irish red ale.

Colour is a murky red brown with a bubbly white head that won’t keep you company for long. Aromas are pleasant and mildly malty; they have oats in here as well as barley. And it continues on its modest way on the palate, smooth of texture and smooth of flavour, the malt, with the slightest hint of sweetness, leading the way to a refreshing and satisfactory conclusion. One to note, methinks.

He had bad news: It’s was a seasonal beer last autumn, only did a few batches of it, you might still find it a few places, but we're not stocking it at the moment.

And he had good news: Might brew it again in a few months though as many are asking for it.

They say: We are passionate about making beer with no compromise, brewing small batches with big personality. Using locally sourced grains, the best hops and water from our own well, our beers are handcrafted with care in our Brewhouse in Clonakilty by head brewer ‘Thirsty’ Frank Fredriksen and his team.

Clonakilty is at the centre of such a positive mix of beautiful scenery, amazing food, interesting characters, quirky local stories and strong town spirit. We consider ourselves hugely lucky to be able to make our beer here and become part of the tapestry of this place. It also pushes us to brew beer that stands with the best and make the town proud of what we do.

This recent Trick of the Light IPA from Trouble pours a hazy orange in the glass and there’s a soft white head that stays around for a spell. Tropical aromas rise up to greet you. And there’s a tropical posse on the palate also, along with the none too subtle spice of the rye, no shortage of citrus either, as all the hops contribute. Quite a forceful palate actually before a lip smacking finish.

The Kildare brewery, who also added oats here, say: “…Trick Of Light, a 6.3% IPA that has been dry hopped with Azacca, Cascade & Idaho 7 to deliver a big fruity blast of orange & grapefruit pith. The Idaho 7 gives a hint of pine that balances beautifully with the spiciness of the rye malt.”

Trouble Brewing was founded in 2010 by three friends: Paul, Tom and Stephen. Tom had been homebrewing for years (there’s always one!) and insisted on sharing the fruits of his labour with Paul and Stephen.  On nights out, he dragged them to drink pints of various styles and flavours at pubs like the Porterhouse and the Bull and Castle beer hall, both Mecca’s for great beer in Dublin.

Paul soon developed an interest in brewing himself, and it wasn’t long before he realised making beer was a relatively inexpensive process and buying it was quite the opposite.  With this in mind he approached Tom and Stephen with the idea of setting up a brewery of their own. It could provide an income for the three and get them out of the unfortunate situation of working for “the man”. They gathered up all the money they could (about €45k between them) and borrowed the same from the bank with the help of a well prepared business plan. Then they set about putting together a functioning brewery.

And they are functioning very well indeed, thank you!