Local Whiskey and Beers enjoyed during

The Connacht Distillery are proud of their Batch 1 as it is the first whiskey to come off their own copper pot stills. “..it has been patiently matured for four years, when our distillers judged it to be ready for appreciation by whiskey lovers.This small batch, double distilled single malt is made from 100% malted irish barley, aged in ex-bourbon casks and finished in Jerez casks.”

We were in Ballina, where the distillery is located, to visit relations and booked a tour. The tour is pretty routine, takes you through the process as you walk around the working distillery. You learn the pot stills are Canadian, the barley comes from Hook Head (County Wexford) and it is malted in Athy.

Following the milling and mashing on site, the spent grain goes to some happy local cattle while the wort, goes to the fermentation tanks and, with the addition of yeast, the whiskey begins to emerge. Now it’s on to the copper pot stills (‘think of them as kettles”) for either double or triple distillation. The whiskey is bottled onsite.

Soon we arrived in the cosy comfortable bar for the tasting. It wasn’t mentioned during the tour but the website tells us the timber floors were rescued from Boland’s Mill (Dublin), the very floors “upon which Irish patriots stood and battled British soldiers during the 1916 Easter Rising.”

Our assignment was threefold but a much more comfortable experience than the battles of 1916. Under the logo of the Sea Serpent, we tasted three of the Connacht spirits: The Straw Boys Poitín, Ballyhoo Irish Whiskey, and the Connacht Single Malt Batch 1.

The Poitín, at 45%, is a very smooth (no alcohol burn) and an easy drinking example of the native drink. The Ballyhoo, another smooth dram, began as a sourced Irish whiskey that “we bring to our distillery to further age and finish in used port barrels from Portugal”.

It was good but I was really waiting for the Batch 1 and I wasn’t let down at all. Sweet, spicy and especially fruity, it is warming and full bodied with lingering walnuts and honey. The ABV is 47%. The RRP is €64.99 but if you take the tour you can get a 10% discount, though you may have to ask for it! 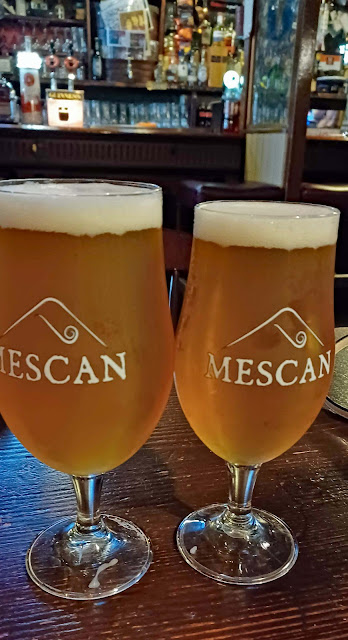 We were in Ballina, where the distillery is located, to visit relations before a two-day break in Roscommon. Our next stop was Swinford for a very comfortable overnight stay at the Deerpark Manor B&B. Very friendly hosts and an enjoyable breakfast as well, in a location convenient for us with Roscommon just a short drive away but the likes of Knock Airport, Castlebar and Westport aren’t too far away either.

We have, for a quite a while now, an ambition to visit the Mescan Brewery near Croagh Patrick but it just wasn’t possible on this occasion. However, that didn’t stop us from enjoying some of their beer in the lovely old pub, Mellett’s Emporium in Swinford, a ten minute stroll from our B&B.

It looked very well kept from the outside and when we spotted a sign for Mescan in the hallway, we went in without hesitation. Quite a good buzz there for a Tuesday night! And that Seven Virtues Lager on draught was just the job after a long day. Besides, we also got to enjoy the Jack the Lad Ale by the Reel Deel brewery from nearby Crossmolina.

In fact, it was craft beer all the way on this trip, as our Roscommon hosts, Keenan’s of Tarmonbarry, also had two beers on tap, the Little Fawn by White Hag and Scraggy Bay by Kinnegar.

The trip from Cork to Ballina took us about three and a half hours and was pleasantly uneventful. It should also have been 3.5 hours from Tarmonbarry to Cork but the return stretched to four hours. The major delaying factor came in the square in Thurles. When we entered, I spotted a person lying under a truck immediately to the right. Shock was the first reaction but later I read on a local radio’s website that the lady was unharmed so that was very good news indeed.

Superb stay at the lovely Keenan's of Tarmonbarry Hotel

48 hours in Roscommon and neighbouring counties