Two Winners. A Malbec from its Cahors home and a Hawkes Bay Syrah

Two Winners. A Malbec from its Cahors home and a Hawkes Bay Syrah

I’m always interested in a wine that has had input from Pedro Parra, the renowned expert on soil and vineyard mapping. Always interested also when I come across a wine from Cahors. And here I have both, together!

In the summer of 2010, I was meandering lazily, like the River Lot, through the vineyards of Cahors and the ancient Cathar fiefdom of Luzech before getting down to buying some wine in the little village of Parnac. Here the Cave Cooperative du Vignoble de Cahors (you saw Les Cotes d’Olt on the signs) have a massive cave with a fine shop.

Founded in 1947, it has also been credited with the revival of winemaking in the area which had fallen on hard times. The  Cahors vineyard and its Auxerrois (Malbec) was fading having had survived for at least 600 years. Led by the Syndicate, then "headed by Abel Baudel, and by the new actor that is the cooperative cellar, Cahors wine received its first quality label, the VDQS in 1951. …On April 15, 1971 the classification decree (AOC) appeared. Cahors enters the elite of French wine.”

And while Malbec is now very much associated with Argentina, Cahors remains one of its best vineyards. Indeed, the ongoing revival, even this bottle, has been boosted by an Argentine touch.

Causse du Théron is a project started by Antonio Morescalchi of Altos Las Hormigas in Argentina and his friend Pedro Parra, the renowned expert on vineyard mapping in South America.

Following their first visit to Cahors in 2013, they became fascinated by the origins of Malbec and the region’s diverse soils, especially the vines planted on Kimmeridgian limestone. They selected two vineyards owned by a local family as the wellspring of their Cahors Malbec project. The name, Causse du Théron, translates to ‘hills of Theron’, causse meaning hill in the local dialect.

Wines from Cahors were, over the centuries, known as “Black Wine” but this one is light, an alluring and bright mid ruby. Cherries and herbal notes head the aromas. Tart berries and cherries backbone the fruit-driven wine on the palate where a fresh acidity is an outstanding actor. Concentration is high - the vines are forty years old. Silky tannins underline its refreshing quality and the slightly spicy finish is lengthy. Elegance over power. Very Highly Recommended - just as well after the build-up! 😉

Fermentation took place in temperature-controlled, stainless-steel tanks using ambient yeasts. The wine spent between 15-21 days on its skins with gentle pump overs to aid extraction. The wine then aged for 18 months in cement tanks to allow it to mellow into what is the top Malbec I’ve enjoyed in a long while. 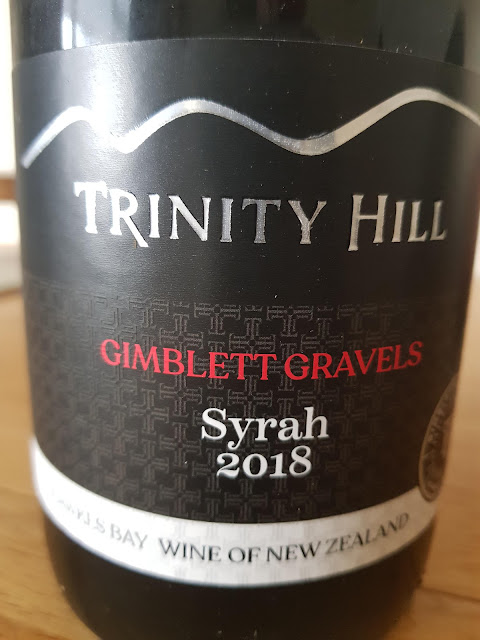 In 1993, Trinity Hill was one of the first to plant grapes on the Gimblett Gravels in Hawkes Bay in 1993. The Gimblett Gravels, located on the former bed of the Ngaruroro River, is now a highly sought-after sub-region renowned for the quality of its wines, particularly those made from Syrah.

Colour here is quite a dark crimson, lighter around the rim. Jammy fruits and pepper in the aromas. That fruit is prominent on the palate, with subtle oak in the background. This Syrah lives up to its French name with an elegant restraint. Tannins are ripe and the natural acidity is another plus factor. Finish is smooth and long. Great purity and freshness here and Very Highly Recommended.

The wine was aged for 14 months in a mixture of new and older French oak 228 litre barriques and 5,000 litre oak ovals. This barrel ageing regime, more typically used in the making of Pinot Noir, includes lees stirring and very minimal racking. It was bottled in early 2019.

They say: Our premium wines made from hand-picked fruit exclusively sourced from estate vineyards in the Gimblett Gravels grape growing region. These wines are elegant yet powerful and reflect the very best expression of the vineyard and winemaking team. They are made with food in mind (great with red meat dishes but especially good with game, particularly with duck and venison) and lend themselves to mid to long term cellaring.