A Quart of Ale± #100. Quite a quartet for the 100th: Whiplash, Dot Brew, Ballykilcavan and Boundary.

Quite a quartet for the 100th: Whiplash, Dot Brew, Ballykilcavan and Boundary. 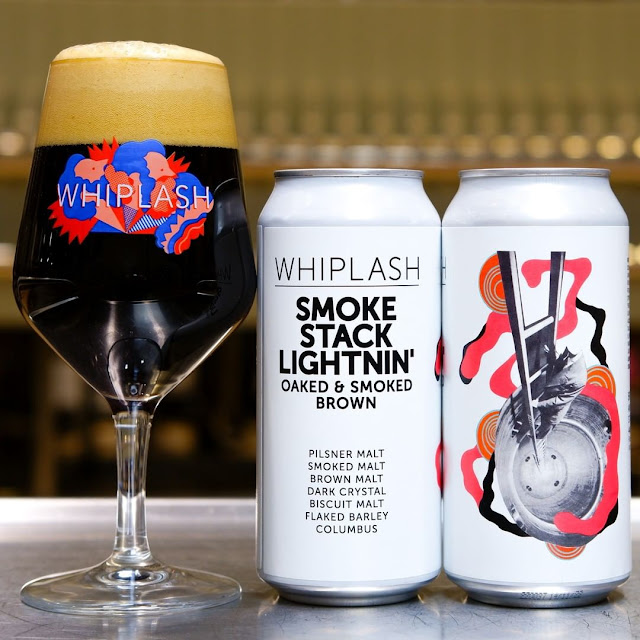 Oaked and Smoked it is with its tanned head over a very close to black body. Aromas are also from the dark side, rich dark dates and raisins come with toast and in a wee cloud of coffee, may even have been a bit of smoky bacon in the background, even though Whiplash say it is not a Rauchbier. Complex, isn’t it?

It doesn’t get any simpler on the delicious palate, just better. Toasty in the main from the Brown and Biscuit malt used and the smoke’s around as well. Add in the light tannin of the oak while the yeast contributes a mild sweet nuttiness to the complexity. And yet, it is superbly balanced. Lipsmacking and totally satisfying to the finalé. Think I may live forever on the dark side.

They say: It’s still cold out there, and we’ve still room for some malty winter-ish warmers in us. Here’s Smoke Stack Lightnin’, an oaked & smoked big brown. After ferment we age this one in a light amount of American Oak. Not going for big vanilla barrel aged here, just a reminder of how beer used live for a week or two before the days of stainless steel. Coriander and Salt are among the ingredients here, a clue that this is a gose! The Beer Bible suggests that the flavour of this style of beer “is something like salted yoghurt”.

So, okay, we proceed with caution! Colour is not alarming at all, a light orange but murky. Perhaps that’s coriander in the herby aromas, light floral notes too. And then on the tangy palate, you may detect clove notes and the lemony tartness introduces itself, the coriander and salt duet towards the finish. Yet there’s nothing extreme here in the Dot Brew version; it is all very approachable, quite a pleasurable and refreshing beer indeed.

The can’s list of ingredients: Barley, Oats, Wheat, Hops, Salt, Coriander, Yeast.  The variety of the other ingredients has reduced the effects of the hops leaving us with a bright, zingy and refreshing beer. As they say themselves: “An easy drinking mixed fermentation tart ale built with pilsner malt and pale wheat.”

Gose-type beer is a beer originally made in Germany in the Goslar salt mining region, where the local water contributed the salty element.

“I’m in farming mode now,” said Ballykilcavan’s David Walsh-Kemmis as he joined a recent Zoom where the subject was whiskey. Whiskey? Yes, indeed. Ballykilcavan has been building strong links with the national spirit over the past decade or so. Their barley is used by Waterford while Irish Distillers have used their oak to make a limited amount of casks (for Dair Ghaelach).

This particular beer was one of the non-whiskey drinks for the Zoom tasting. David explained that the brewery is part of the diversification of the farm: “This is the export version of Bambrick, nice and malty with toffee and caramel, at 7.8%. Very much a malt beer yet not malt driven, a real flavour beer. It’s made with amber and crystal malt from our own barley.”

Deep brown going on black is the colour here, with a tan head. Aromas are chocolate and coffee. It is indeed rich and satisfying on the palate, a broad deep flavour, but quite a balance there too, maybe something mineral from their spring water and the land through which it flows, to help you to both enjoy the chocolate and burnt toffee flavours and enable the refreshing finish.

Brown ales and like-minded styles — including straightforward lagers, pilsners and porters — to name a few, are very different sorts of beers (to IPAs). They occupy subtler realms, quenching thirst with pure flavors and perhaps a snappy zestiness in the case of pilsner and a rich depth in the case of porter. They are not flamboyant styles that wow with complexity or make themselves the centers of attention. They simply satisfy. It’s the kind of beer that gets left behind in our I.P.A. culture.

The Beer Bible: Standard American Brown Ales generally weigh in at about 5% ABV and are accented toward malt richness.

Reckon the standard 5.8% Ballykilcavan Bamrick’s more or less fits the bill while this Export has a bonus for you!

On the lookout for a low alcohol beer? This Belfast offering, weighing in at 2.6 abv, could well fit the bill. Known in France as bière de table, table beers—are a low-ABV, malty, Belgian tradition.

Here though the tables are turned and this is a hoppy one. Boundary say: A full on hop assault in the kettle and fermenter ensures this low abv beer packs a punch.

This is a hazy beer with a white head over a lemon-juice coloured body. The hops used are an American trio of Cascade, Citra and Simcoe and the Australian Vic Secret. Expect pine notes along with exotic fruit such as mango, pineapple and grapefruit and indeed that is what you get.

Superbly flavourful for a such a slight abv and just enough bitter notes to ensure a refreshing and balanced finish. Enjoy one. Or two!