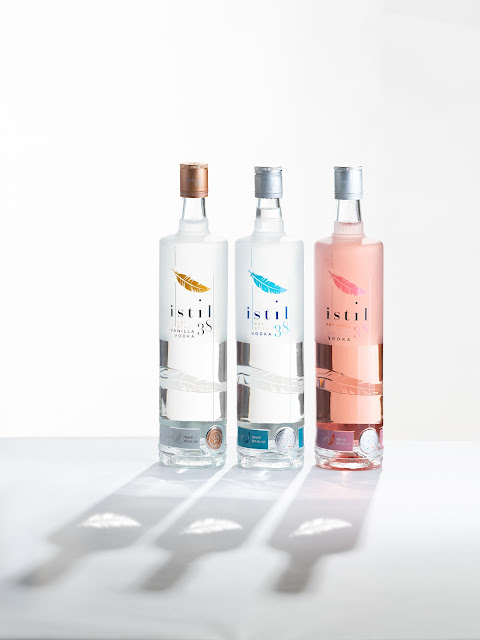 Sugarloaf Beverages are proud to share details of their first release, istil 38 Pot Still Irish Vodka. Produced in a traditional copper pot still, but made to be enjoyed with thoroughly modern serves.

istil 38 Irish Vodka has three expressions in its range. A classic vodka and two flavours, Pink Berries and Vanilla. Each one is specifically designed to be mixed into long drinks and into some of the world's most loved cocktails.

It is slow distilled four times thus leaving the vodka so pure that it needs no further filtration, leaving istil 38 with a highly finessed quality of liquid. This distillation process also gives the vodka a softer, velvety mouthfeel.

istil 38 Pink Berries is flavoured with Irish berries to give it a fruity sweetness that pairs wonderfully with citrus tonic waters.

The brand's management is composed of lifelong drinks industry veterans, Shane Davey who works as managing director and co-directors Niall O'Dwyer and John Reynolds. They are also joined by business woman and lifestyle guru Pippa O'Connor Ormond. She has invested in the brand and taken on the role of creative director.

"I'm very excited about the prospects of being a brand owner and creative director of istil 38 Pot Still Irish Vodka. In terms of sales, vodka is the biggest spirit in Ireland. With istil 38, our ambition is to show people that we have a premium Irish alternative to the industrially produced multinational vodka brands. We make it in traditional means, but our sensibilities for the serves are firmly in the modern era."

"We wanted to create a forward thinking Irish vodka, for people who always seek the best. They know life is short and our time for pleasure and indulgence is even shorter. So we’ve dedicated ourselves to handcrafting this ultimate vodka. For those whose time is at a premium, we feel istil 38 is the perfect premium spirit to enjoy it with."

Another key element behind istil 38, is their environmental and sustainability policy. They are proud to be officially partnered with Hometree with whom they are working to establish and conserve permanent and native woodland in Ireland. 5c from every bottle will be donated to Hometree. And istil 38's actual bottle was chosen due to its shape and weight, which meant less CO2 emissions when transporting. As a brand, they have committed to being a carbon neutral company from the very start of their journey.

istil 38 Key Facts
- istil 38 is produced in Meath with grain spirit in a 500 litre copper pot still.
- the ABV is 38%
- 5c from each bottle sold in Ireland will go towards Hometree for planting native Irish trees.
- RRP is €38
- Available nationwide to the on-trade from distributors such as Comans and Classic Drinks. It can be picked up in all independent off licenses.
- It is also available online with home delivery from https://www.istil38.com/shop/
istil 38