A Quart of Ale± #64 On the craft journey with a session of Hope, Black's, Tom Crean and Rye River's Grafters

On the craft journey with a session with Rye River, Tom Crean, Hope and Blacks 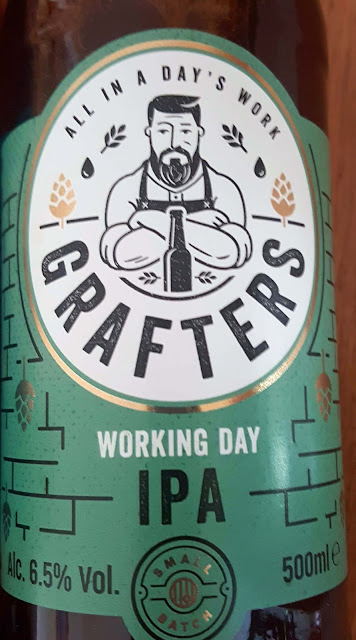 This 2020 Blas na hEireann Gold Medal winner comes in a gold colour with hints of amber. A bit on the cloudy side but you can’t miss all those bubbles rising. Citrus in the aromas and also in the mouth. More fruity and bitter than malty and sweet and also making an impression that is more alcoholic than the 6.50%.

They say: Big, bold and tasty, this American style IPA is full-on flavour, delivering a big hit of juicy, citrus fruits. Perfect to accompany a spicy Indian or Mexican dish. Great with salads too.

Rye River are the brewers here and they make exclusive beers for some of Ireland’s biggest retailers including Lidl (the Crafty range), Tesco and Dunnes… “We’ve no plans to stop growing.” Grafters is one of their brands.

Just wonder who is the guy on the label. He looks familiar. 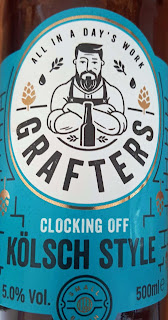 Zillions of bubbles race through the slightly hazy gold to the top where a soft foamy head slowly shrinks.   Citrus notes, plus a hint of honey, in the aromas and that continues on the palate where an orange bitterness comes into play as well; no shortage of flavour yet nicely balanced, this World Beer Award winner is crisp and clean with the malt sweetness a factor. Excellent mouthfeel as well. The finish is moderately bitter. But drinkability is high - you want to repeat the experience. Very high quality indeed - a beer that’s top notch and definitely one for the short list. 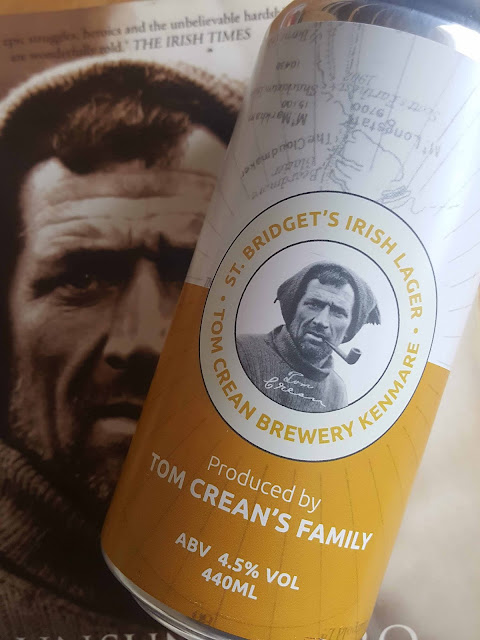 During our brewery tour at Tom Crean’s in Kenmare, one of the first beers that Bill Sheppard mentioned was this lager named in honour of St Bridget who was a brewer. In fact he said quite a lot of the early brewers were women and the church wasn’t very happy with that situation. The brewers wore a special hat for the trade and kept a cat (to protect the grain from mice) and that eventually led to some of them being called witches with dire consequences.

Bill also told us that the Celts would go to war for a good brewer and I was wondering to myself if perhaps Bridget and St Patrick’s right hand man and brewer Mescan knew one another! My Mayo mother was called after the saint. Cheers Bridgie!

Lager of course ties up your brewing kit for longer than ale and maybe that was why there was a shortage of lager from the current wave of craft breweries in the early stages. No shortage now though.

A lovely golden colour on this one, bubbles galore and the bubbly head is not retained for very long. Good balance of hops (Slovenia) and malt (German) on the palate with the malt getting an edge on the finale. Not quite the “cut” that you’d expect from your normal modern lager. Bill has his own methods - take that tour! - and this is a very satisfying lager indeed that reminds me of the traditional Central European style.

They say:  We allow six weeks to bring this classic to perfection. St. Bridget, known in Ireland for her saintly status, her feast day (1st Feb) and her cross made from reeds, is less well known for being a fine Irish brewer.

A bubbly gold ale invites you to “try me”. While its head doesn’t hang about, its pleasure does. It is billed as a classic American style Pale Ale, a pretty wide definition. You‘ll note the citrusy aromas. The hop element of pale ale can vary a lot and this comes in that bit down the scale, certainly much less of a hoppy kick than an IPA.

The producers describe it as an easy drinking malty and slightly fruity pale ale with a subtle hip kick. I’d go along with that. If you’ve been drinking craft lagers, then this could well be your next step! Worth a try for sure.

It is well balanced; the expressive malt and hop flavours complement one another. It is also an all rounder at the table (indoors or out) and chicken, prawns, BBQs and pizzas are among those pairings recommended.

Pass If You Can was the dare of Michael Collier, a notorious 19th century highwayman, who was North County Dublin’s answer to Robin Hood. He was so successful that his townland was dubbed Passifyoucan. Finally arrested in 1807, in his favourite haunt The Cock, he was transported and returned home only to die of cholera! Still, the name remains.

The intensity of this IPA introduces itself the second you pull the tab. Take it easy is the message as the aromas surge upwards.  Colour is a hazy orange, not easy to see the bubbles though there are herds of them. The head, starts at about the 3-finger mark, but soon it thins to skin thickness (or thinness).

So back to those strong aromas, featuring pineapple of course. A lot going on here, even a hint or two of pine (the evergreen). And flavour?  Pineapple for sure, “super prevalent” as they say themselves, apricot too and citrus-y elements as well.

Quite a punch, yet the alcoholic power is well reined in here, no all-enveloping black hole where everything is so concentrated that you don’t recognise anything. Iron fist in a velvet glove comes to mind. Just keep it in mind, respect the power, proceed with caution and a great deal of pleasure. Less caution = less pleasure.