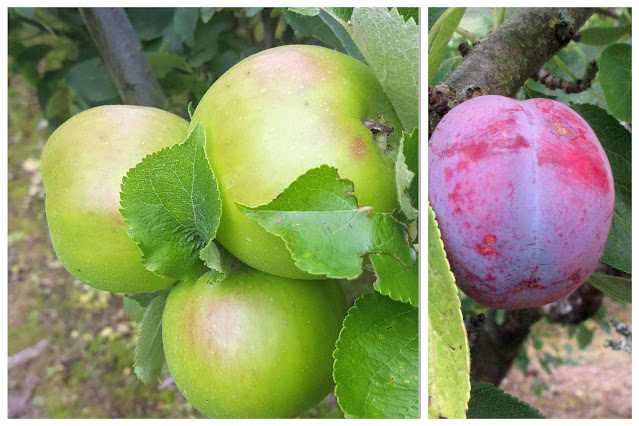 The forecast for last Tuesday promised the best day of the mid-August week, and so the decision was made to head for Tipperary, beginning with a visit to the Apple Farm (on the Cahir - Clonmel road) and to lunch at Mikey Ryan’s in Cashel. A good decision, a good day.

We arrived at the Apple Farm in mid-morning - it’s just about an hour or less from the eastern edge of Cork City. The car park was pretty full but we found a spot and were soon shopping. The just picked plums were the main target and we had to restrain ourselves to four packs.

We also spotted some pristine raspberries here and they were soon bagged as were some Slievenamon View farm organic tomatoes. Juices were added and more, including those delicious apple crisps. And, of course, you couldn't leave all that Con’s Cider behind!

As it happened, while loading the car, we met the man himself Con Traas, responsible for this terrific operation here. He was getting ready to head up to Nenagh with a delivery for Peter at Country Choice, another top notch Tipperary enterprise.

We had one more “assignment” at the Apple Farm and that was to take the short stroll over to their wildflower area. Con has established this in recent years to enhance the diversity of his pollinators. It is a lovely quiet spot away from the busy yard and I enjoyed strolling around and taking a few photos.

We would of course enjoy the fruit later. The amazing Opal plums and their delicious flavours took me back to my younger days when I picked fruit at a nearby farm which had a walled garden. The raspberries also were just perfect in size and colour and, not alone did they look well, but their flavours were supreme. Attention to detail around this farm pays off for the customers.

Would that we had many more operations like this around the country; then we could cut down on the tons and tons of apples that we import.

We didn’t eat any of the fruit at the farm and so were glad of that as we had a reservation for lunch at Mikey Ryan’s in Cashel, just a short trip away.

All around the back of the restaurant, the new edition Cashel Palace Hotel (same owners as Ryan's) is taking shape.

Mikey's have a lovely outside area at the back but the glass lined interior restaurant, where we dined, is also bright, not least because of a series of skylights. Lots of horsey pictures around here too and, if you keep your ears open, you might well pick up a tip and cover the cost of your nosh!

And Ryan’s support local, big time, including Con Traas of course and noteworthy Tipp names such as Blanco Niño, Cashel Blue, Cooleeney Farm, Crossogue Preserves, Crowe’s Farm and local butchers including Una O’Dwyer (Ireland’s only female butcher). Good too to see at least one tap with the White Gypsy logo as we passed through the bar on our way to our table. 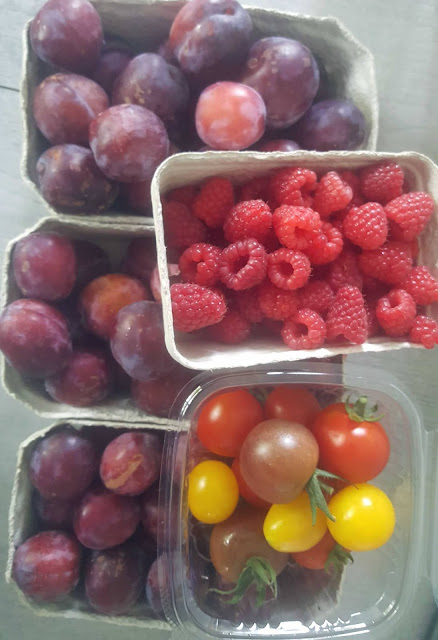 We enjoyed some delicious nibbles on a previous visit a couple of years back but alas the The Sweet Potato Crisps with smoked chilli salt are no longer offered! But the black marble bathrooms are still there, still high class, as good as you’ll get in a five star hotel. And keep listening for those racing tips!

Service was nice and friendly and, sipping some apple juice, we soon decided on our main courses. I picked the O’Dwyer’s Premier Burger and Chips (17 euro) plus another euro for the Cashel Blue Cheese upgrade. In the more expensive bracket for burgers for sure but also one of the very best! Very juicy, very flavoursome and totally enjoyable!

And the verdict from the other side of the table was a big thumbs up for the Spicy Free Range Chicken Burger (buttermilk marinated chicken thigh, sriracha mayo and gem lettuce). At €17.50 not inexpensive but again top class though, in the head to head, the beef was the agreed winner!

Well satisfied after that, we skipped the dessert but did linger over two excellent coffees, a blend by Dublin Roasters 3FE. Bought a likely looking piece of soda bread at the Town House Deli, also on the Main Street. Thought we might need it later on but maybe not with all that fruit in the back of the car?