When you visit the Clonakilty Black Pudding Visitor Centre in the town, not alone will you see and hear the history of the famous product made right here but you’ll also get to taste it! So you get an hour’s entertainment and a mini-lunch! Well worth the tenner admission (though we two seniors paid just €7.50 each).

And of course, you get a friendly welcome. The tour is self-guiding but you are aided by an audio device that fills you at each stage. Much the same info is covered on a number of illustrated panels. You’ll also get a “chat” with the grocer and the butcher (they’ll have their eyes on you) both of whom have a good sense of humour.

And you get to know some of the key characters in the story, that began in the 1880s. It was then that the recipe originated in the town of Clonakilty; it hasn’t changed in that time. Since the Twomey family took responsibility for the secret recipe in the 1980’s, the popularity of the Blackpudding has continued to grow in Ireland and now around the world. Over the years they have extended the product range to include sausages, rashers and most recently Veggie Pudding!

The first Clonakilty black pudding maker was Johanna O’Brien, a farmer’s wife, from nearby Sam’s Cross who wanted to subsidise the household income making black pudding for Harrington’s butcher shop - to this day you’ll note “Original Harrington’s Recipe” on the label. When Johanna died, the recipe, which included Johanna’s secret spice mix, was faithfully handed down to Philip’s family and for over a century, the black pudding was made by Dan Harrington, Con O’Callaghan, Paddy Allman.

Edward wasn’t that keen on the product but realised his customers were and eventually he became hugely enthusiastic. Edward’s personality and belief in the product helped propel Clonakilty Blackpudding to get the recognition it deserved. 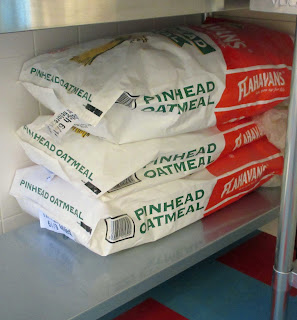 Michael Clifford, was one of Ireland’s most famous chefs, holder of a Michelin star, was an early and influential supporter of the Clonakilty product. And it is acknowledged here that his signature dish of black pudding elevated the humble breakfast staple to being acclaimed as an excellent starter. (Lots of recipes on their site here).

It wasn’t long before Clonakilty Blackpudding was being mentioned in the press and media. And eventually that led to Edward appearing on the Late Late Show (you can view that excerpt during the tour).

Edward and his wife Colette were very much in demand at food shows and exhibitions all over Ireland the UK and an export market began to grow. In 2005 Edward Twomey died. Colette now led the company forward and still does.

There are quite a lot of artefacts from the history of the company and the town to be seen on the tour and you may also view part of the production through special windows to the factory floor.

And, at the end, there’s that treat. Some freshly cooked black and white pudding, also that new and tasty veggie pudding, some sausages and a big cup of tea or coffee. There is also a lovely little café here but that can’t be used at the moment (June 2021) because of Covid restrictions. Hopefully, that restriction won’t last to long more and you’ll get even better value from your visit.

The newly opened visitor centre is another indoor attraction in the progressive town, great on a misty day (as was the case with us). Other indoor places (that I know of) are the Michael Collins House and the Clonakilty Distillery. Part of the Model Railway Village is indoors too.