A Quart of Ale± #56 Another session on the craft journey with Lager, Pale and Dark Ale and Stout.

Another session on the craft journey.

Great visuals with this one. After the sound effects of the widget, you pour, at the 45 degrees of course and slowly, and then it clears, upwards, from a muddled mess to a shiny black mass with a steady and creamy head. The roasted aromas confirm the familiar feeling. Am I back in the bar or what? The magic continues on the palate, full bodied and impressively smooth and all the while that superb roast flavour, a hint or two of smoke there too. And then that traditional dry finish.

Like the few words on the label: Chill Pull Pour Pause Enjoy. Pretty accurate! By the way, we finished (rather than started with this beauty!)

So what’s this nitro? Nitrogenation was used in stouts to approximate the smooth carbonation typical of cask conditioned ales and has become the norm for kegged Irish stout, giving a smooth creamy texture to the head.

And stout itself? While the term stout is reputed to have been applied to higher abv porters in Britain, it is said that the “stout” style that evolved in Ireland originates from the use of heavily roast malts introduced in Irish breweries after the famine in hardened economic times. While not strong in terms of abv the stronger roast flavoured malts lends a more robust flavour to the style giving a dry finish – hence the term Dry Irish Stout. 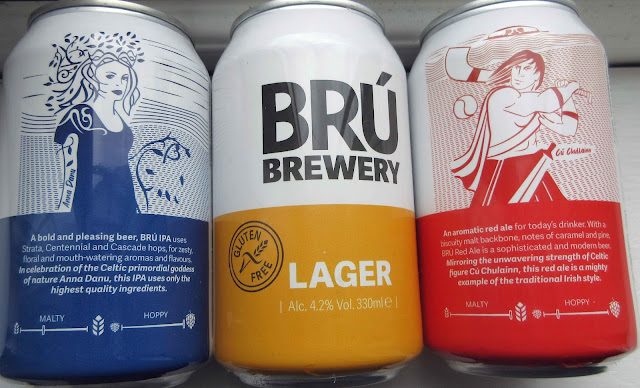 Very clear light gold colour.  Aromas are malty and on the palate it is the malt that comes through more than the hops (their website describes it as their love song to malt). It’s a light and refreshing lager, certainly more for recreation than meditation, more for a multi-person session than a solo hour. Enjoyable.

They say: You can find BRÚ beers on the shelf or at the bar across Ireland in many pubs and restaurants and in your local independent off licence. We’re also stocked nationwide in some of Ireland’s finest retailers.

Treat this one fairly roughly at the start and you are rewarded with a big white head, with a bit of staying power. Colour is an almost totally clear light gold with many fountains of bubbles finding their way upwards. Take a sniff over that slowly shrinking head and you get the freshness of the hops. Dip your finger into the foam and you get a hint of what’s to come, a bit of bitter orange, as if you’d eaten a piece of the peel. That orange is still there on the palate but now there is a balance, a crisp and refreshing harmony all the way through to the finish. The label promises a bright crisp Pale Ale designed to let those delicious hops sing. I reckon they got it spot-on. By the way, after all that smelling and tasting, the head is still there but barely half a finger’s worth - no matter.

This March issue is the second in the Electric Avenue series which uses the freshest hop combinations on a base beer that allow them to shine. Hops used here are Talus and Hallertau Blanc. Talus is a new proprietary hop from the USA.

They say: Hallertau Blanc has been a firm favourite here at the brewery but we hadn't got our hands on Talus before now. It didn't disappoint. We think this is a great pairing.

Their story: Lineman had been a long-planned project of founder/owner/brewer Mark Lucey. Having been obsessed with beer and heavily involved in homebrewing for all his adult life, it was always an ambition to open a brewery or have a commercial brewing project that would allow him to produce a diverse range of beer: Stouts, Belgians styles, IPAs and Mixed Fermentations.

It soon became a proper husband and wife team when Vivienne joined shortly before the first beers were released. Being a graphic designer with lots of commercial experience she was able to bring the look for Lineman together just in time for their beers to be released. Vivienne produces all the artwork and looks after the marketing side of things. 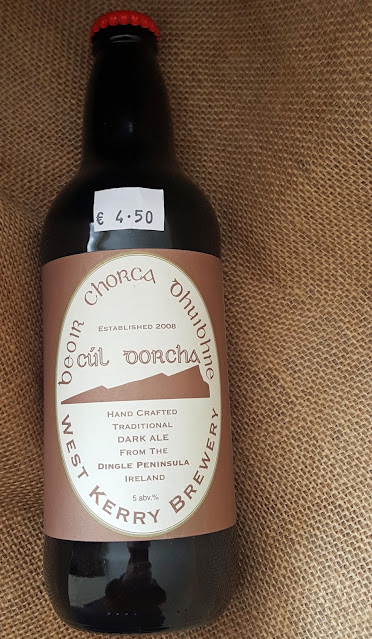 The name Cúl Dorcha comes from a local shore and means dark back (probably no lightbulb out the back). Dark red is the colour of this Kerry beer with its soft white head that reduces soon enough.

All’s dark then. Roasted malts on the nose, hints of smoke. The malt runs deep, caramel, chocolate, smoky peat; complex palate also has a sourish aspect and slightly bitter too towards the finish.

It is indeed a distinctive beer as we’ve come to expect from West Kerry where sculptor Adrienne is also the owner and brewer at Tig Bhric, the public house where the West Kerry brewery is based.

They say: Cúl Dorcha is a dark ale, with a deep maltiness that includes hints of dark chocolate. Hopped with English hops for an easy-drinking beer with a slight spice note to the finish.