A Quart of Ale± #54. On the craft journey with a quartet of IPAs

On the craft journey with a quartet of IPAs 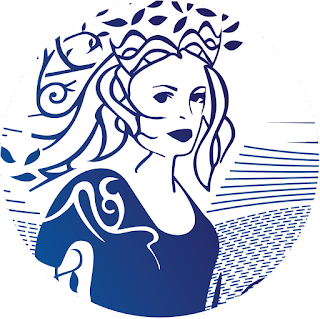 This is a bright light gold IPA from Brú, lots of bubbles spouting up towards the quickly diminishing white head. By the way, the longer it was out of the fridge, the hazier it got. Strata has, in recent years, become the darling of craft brewing. It brings tropical fruit notes to the aroma and flavour mix, citrus too, and you can see here how well it combines, as you’d more or less expect, with Centennial and Cascade. It’s a mouth-watering package indeed, zesty and hoppy. 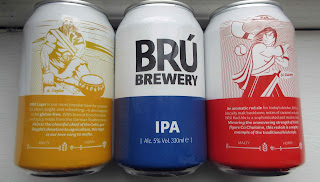 According to Brú’s own notes,  this “bold and pleasing beer” scores  33% for “malty” while “hoppy” hits the 100 mark. Not too sure it’s that bold but certainly its very pleasing indeed. The blue lady you see on the labels is Anna Danu, the Celtic primordial goddess. As a tribute to her (and for more practical reasons too, more than likely) only the highest quality ingredients are used. A good policy and, clean and bitter, is a very good beer indeed. 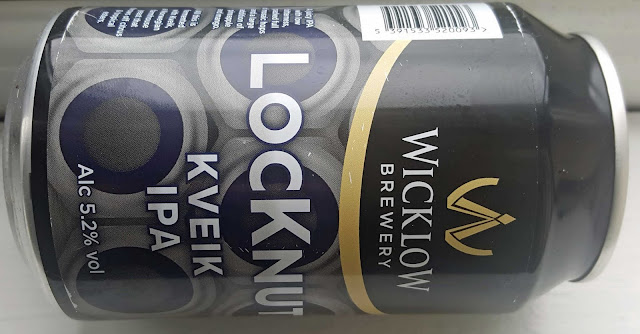 An orange/gold colour with a dense haze and a soft floppy head that hangs about for a bit. Aromas aren’t intense at all, a little citrus-y, perhaps a tiny hint of salinity in there as well. Quite a mouthfeel to this one across the palate. Bitterness is modest and it is quite juicy; as well as the Mosaic hops, “a large addition of pineapple and mango” has been added and is listed among the ingredients.

No Kviek in that list but it is prominent on the can. What is it? A Norwegian farmhouse yeast that throws off citrus and tropical esters. Kviek, also one of the Norwegian words for yeast, is now widely used in the beer world.

Its distinguishing factor is that, at very higher temps (c. 104 degrees F), Kveik can ferment the same 5% ABV beer in as little as 48 hours—three to five days sooner than a typical ale yeast. And it also throws off those citrus and tropical esters.

Quite a juicy little number then, one that will satisfy many, though not perhaps the hop heads!

Bradleys in collaboration with DOT Brew “The Real Capital” IPA 6.2%, 440 can

This Real Capital IPA has a colour a bit like the city at sunrise on a foggy day, a hazy orange. There’s a soft white head on top that thins down quickly enough. With a “healthy helping” of Idaho-7 and Amarillo hops on board, you’re guaranteed pretty intense aromas (tropical, citrus plus floral also) and so it goes also on the palate but there’s also more than enough bitterness, a bitterness though that is light and lively, so that it’s harmony all the way, like a happy version of After All by the Frank and Walters. Capital stuff, really.

This well muscled beer (6.2%) is a collaboration between Bradleys (founded 1850) and  the much younger DOT Brew (from the unreal capital). It is exclusive in store and online to Bradleys Cork. Flaked and malted oats and a healthy helping of Idaho-7 and Amarillo hops are the key ingredients. 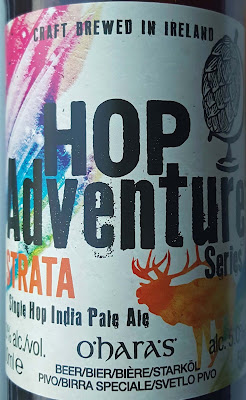 This edition in O’Hara’s Hop Adventure showcases Strata – a brand new hop cultivar that has received wide-spread acclaim, and for good reason! Strata has a complexity that lends itself perfectly to a single hopped beer, the same Strata in the Brú above.

This comes in a light to mid gold colour, a soft white head. Lots of bubbles rising too. Aromas are lively enough, bright fruit with citrus to the fore, also a herb-ie touch. Very impressive balance on the palate, hops and malt in active unison, soft and juicy and refreshing right through to the very pleasing finalé. Thumbs up folks.

Food Pairing- Perfect for matching with a spicy, diavolo Pizza, Fish and Chips and blue cheese.

Slainte, the 2014 guide to Irish craft beer, classed Carlow Brewing, along with Porterhouse, Franciscan Well, Whitewater and Hilden, as being in the first generation of Irish craft brewers. Not an easy station back then (1996) but Carlow successfully entered the export market to gain experience and sales and eventually a firm footing at home, their hard-won achievements underlined when they left their original premises behind and moved to a smashing new premises in Bagnalstown in 2009.