From New Orleans To Ballydehob!

The Muffuletta has landed! It is on the menu of Ron D’s Food Truck every Wednesday in Ballydehob.

Simon and Liz are the American couple behind this wagon of wonderful sandwiches. Liz fills us in on the Muffuletta: “We first had this amazing Sandwich in New Orleans @centralgrocerynola where it was first made by a Sicilian immigrant in the 1900's. If you haven't guessed it, Simon & I love Sandwiches & this one is damn close to being at the top of the list!”

“The bread is our homemade Sesame Sourdough, not traditional, but this is our take on the original. Next are layers of salty cured meats Capicolla & @gubbeen Salami followed by the softer Mortadella. Lots of Provolone cheese & the amazing Giardiniera (also not traditional). It's a delicious pickled vegetable Italian relish that we make. Traditionally it would be just olives but Giardiniera gives the sandwich a real zing. Hope you guys love this classic New Orleans Sandwich as much as we do!!”

We do. It is just an amazing and harmonious concertina of tasty layers, the different types of meat, the relish, the zing of the Giardiniera, the superb bread, the quality, the quantity, a classic that rocks from first bite to last. 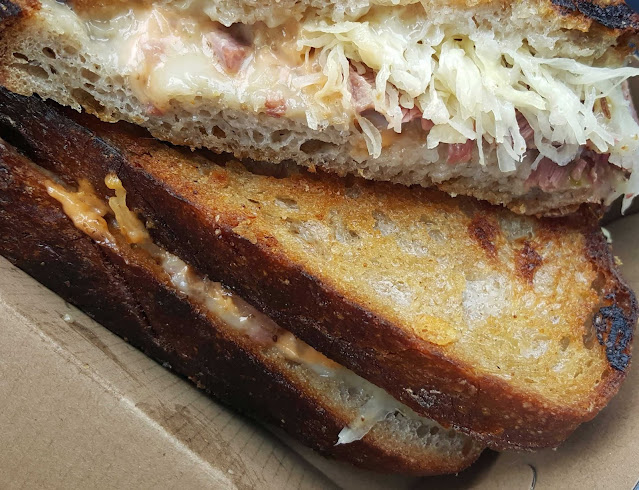 And speaking of classics. They do a mean Reuben too: Salt Beef, sauerkraut, Swiss cheese and Russian Dressing (not the mass-produced one!). Another amazing sandwich to make those taste buds stand up on full alert. Because of the drizzle, we had to eat our two, the Muffuletta and the Reuben, in the car. There weren't too many full sentences spoken for quite a while, just lots of oohs and aaahs!

The grilled sandwiches come on their own sourdough and other choices last Wednesday were a Veggie Reuben, The Grilled Cheese and The Vegan Dream. 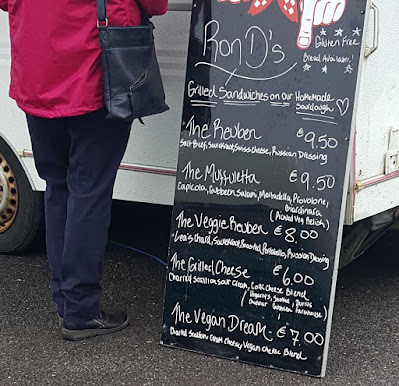 It isn’t just big flavour-filled sandwiches though. You can get doughnuts here, if you’re fast. And you need to be faster still to get their potato versions.

“Donuts for me bring me back to my childhood. Where I'm from in New England or Cape Cod, Massachusetts to be specific, hole in the wall, mom 'n pop donut shops still exist. Mostly all are family owned and are packed full of delicious homemade donuts and usually bad coffee.”

“The donuts are big and they have funny names like Honey Dip, Cruellers, Old Fashioned, Bear Claws, the list goes on. My first Potato Donut was in Portland, Maine, and it was fluffy, so fluffy, more so then a traditional yeast raised donut and so good. I thought they would be perfect for the truck especially since we are in Ireland the land of potatoes.”

Looking for something sweet to bring home? How about a Hand Pie? “In America the pie is enjoyed throughout the year, each season showcasing a different delicious pie, my favourite being Rhubarb! So I decided to make a smaller version of my classic pie for the truck. These hand pies are filled with a local rhubarb compote and Irish apples.  These are a perfect treat for after your sandwich or better yet bring it home, warm it up, and enjoy it with your cup of tea! And if you’re feeling fancy, put a scoop of ice cream on top for an amazing dessert!” 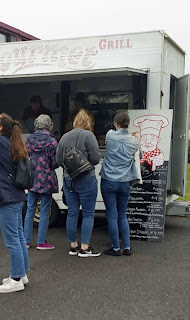 Simon and Liz have been in the West Cork area for quite a while now but it all started before when they were in San Francisco. “We were absolutely blown away with all the amazing bread there, especially from @tartinebakery. We were hooked on REAL bread and never looked back. So our focus now is baking sourdough for y'all and turning those loaves into delicious grilled sandwiches. Which we'll be selling from our trailer, Ron D's, in the Ballydehob Community Hall Car Park, Wednesday's from 12:30-3. I will be baking up some sweet treats as well and diving in to my American roots for inspiration.”

So you may be asking who is Ron D. Well the truck is named after Liz’s father, quite a foodie!

Parked outside the Community Centre in Ballydehob. Coming from Skibbereen, take the first left after you go over the bridge. Wednesdays from 12:30-3.00pm.

Visiting the home of Clonakilty Blackpudding