A Quart of Ale± #55 On the craft journey. Time for a session!

On the craft journey. Session Time! 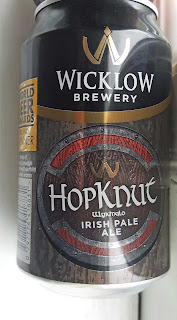 Amber is the colour here with a strong touch of orange. The white head persists for a spell. You get the hops smell the second you pull the tab; later, there’s robust orange, and some caramel from the malt aromas. The flavours follow the aromas on the palate, medium-bodied, and finishing crisply dry. It is very approachable, very drinkable indeed, refreshing, almost Märzen like. Neat and tidy, well put together and one to put on your short list.

The label tells me that Knut was a Danish Viking king who ruled over the Scandinavian empire including Wicklow (Wykinglo) in the 11th century. My scepticism was on high alert when I first saw this on the label on April 1st. You don’t have to believe everything you read but there is some factual basis for this.

The main thing to take away from this is that the beer is excellent. Looking forward now to trying a few more from the Redcross brewery, preferably in their Micky Finn pub. It might well have been called the Wykinglo Pub - that would have harder to pronounce!

There’s a vibrancy about the colour of this red ale from the County Clare. The soft off-white head sinks slowly enough. Malt leads the way in the aromatics. And there’s a malted intensity too on the palate, a traditional one but none the worse for that. Far from it. Something deliberately clean and precise about this one. Straight on to the short list!

So what is Red Ale? They say: Similar to English Pales and Bitters, the Red Ale is brewed with a variety of specialty malts such as caramel malts, chocolate malt or roast barley to provide a rich, complex maltiness and this beer’s signature red hue. Traditionally, hop aroma and flavour are kept very low to highlight malt character. However, in recent years, many brewers have begun hopping their red ales more heavily in an effort to brew a very balanced, easy drinking beer. 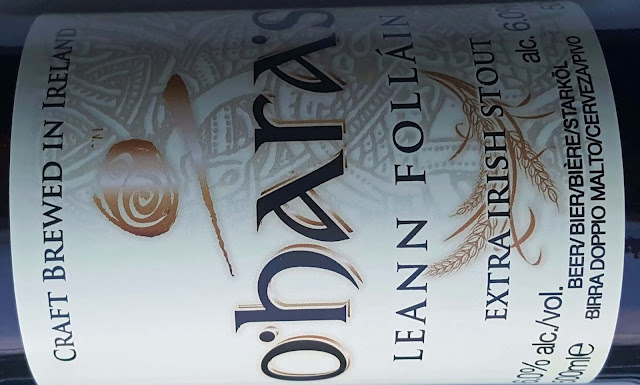 The head, off-white, shrinks pretty quickly over the gleaming black body of this well-known stout. There’s a moderate coffee scent in the nose. And that coffee turns up also on the palate along with chocolate. The full-bodied stout is pretty intense, boasting a refreshing bitterness that rounds it all up, all leading to an intense dry finish. Quite a knockout beer with an abundance of dark flavour  and a refreshing bite towards the end. A true contender! But that’s pretty well acknowledged by now as it has spawned a series of barrel-raised follow-ups. Carry on Carlow!

They say: True to it’s name, “Leann Folláin” being the Gaelic for “wholesome stout”, our full-bodied extra Irish stout is a fantastic example of how good stout can taste. Opaque black in appearance with a tan head, this luxurious stout has a classic European hop bitterness giving a refreshing bite after the chocolate subsides. Leann Folláin takes its name from the Gaelic “leann dubh” meaning “dark ale/stout” and “folláin” being the Gaeilc for “wholesome”.

Serving Temperature 6-8°C (Some enjoy this stout served in the traditional way in southeast Ireland at room temperature “off the shelf”.)

Food Pairing -Dark meats such as venison or beef make an excellent companion. Also to be enjoyed with blue cheeses. 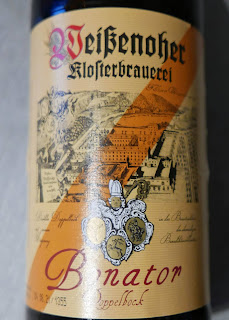 Colour of this Dopplebock is a deep amber with an off white head that sinks pretty quickly. Difficult to separate the aromas, caramel is in there, something more vegetal too. It keeps the tastebuds working too. First impression is that it is a light stout, then some sweetness unsettles the balance a bit before a choir of hops chips in to restore harmony. It stays interesting right to the finish.

And the story is interesting too. The local Cork saying “there’s atin’ an’ drinkin’ in it” could apply here. “Liquids don't break the fast – this was a generally accepted rule for fasting during the times of the Benedictine monks in Weißenohe. To this rule we Franconians owe the mirror carp as an accepted Lenten fare in our landscape that is rich in ponds stocked with carp, and the stout Doppelbock as a liquid food during this time of slender eating.”

The “atin’ an’ drinkin’ in it” may not be too far out. Consider the Brewer’s note: Of course, beer was not only drunk because of the alcohol content. Beer contains a whole range of minerals and vitamins, as well as broken-down sugars that are easily utilized by the body. The monks were highly knowledgeable in issues of health and medicine, so they knew that beer prevents deficiencies. Hence, Lenten beer was, to put things into today's jargon, one of the first nutritional supplements in human nutrition.