Didn’t know I was going to lunch in a space designed by the “Decorator to the Stars” when I pulled off Exit 12 on the M7 on a recent Sunday, planning to visit the famous Newbridge Silverware facility.

After a two hour trip from Cork, the café was our first stop. It sure is a stylish one. Carleton Varney has designed the interiors of landmark buildings from Washington to Japan, and now the world-renowned interior designer has brought his iconic style to Newbridge Silverware.  The ‘Decorator to the Stars’, who is also known in the USA as ‘Mr. Colour’, was commissioned by Newbridge Silverware in 2017 to redesign its restaurant, which is now known as ‘Café Carleton’. 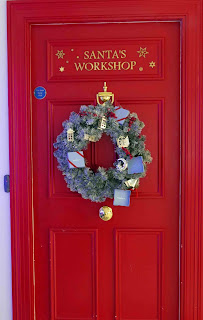 The big bright and airy café uses what seem to be the official colours, blue and white, and lots of silver too of course! With a big dinner ahead that evening, I settled for a wrap, a good one too and well priced. They have a huge selection here and the Sunday lunch was very popular. Staff were friendly and absolutely efficient; the place ran like clockwork but with no shortage of smiles. One of the best of its type around, I’d say.

The menu (breakfast, lunch, afternoon tea) changes regularly and a board shows a long list of Irish suppliers that they support.

Rose was our welcoming guide on the factory tour and she told us the history of the place as we walked around. Newbridge Cutlery Company was founded in 1934 and is one of Ireland’s oldest surviving companies. It started in a local army barracks and a large order from the army gave it a welcome boost in the early years. 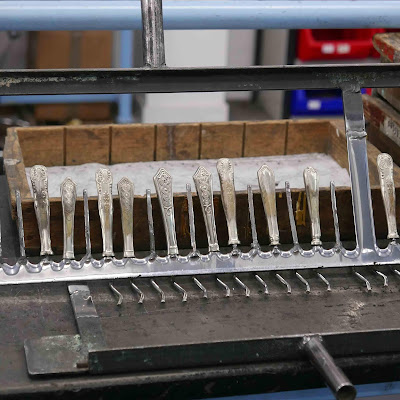 In the 90s, their cutlery wasn’t cutting it anymore and a decision to start making jewellery proved a wise one. Cutting edge design and acclaimed photo shoots with supermodels such as Sophie Dahl, Yasmin le Bon and Naomi Campbell, enhanced the company’s brand image. RTE newsreader Anne Doyle was one of the first local personalities to wear the jewellery.

In 2007, the Museum of Style Icons was initiated and Newbridge is now associated with the world of celebrity and fashion. Still a lot of hard work here though, lots of manual stuff going on day after day and it still takes three years to train a cutler. 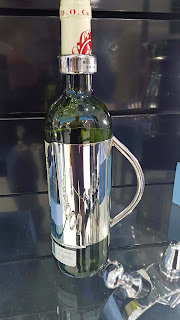 I won’t bore you with too much detail but terms such as Coining Machine, Linishing Machine, Cross Roller, Coining Machine were all new to me. Then there was Pronging, Vibration, and Clairpols. Hafting was another one, an old cutler’s term for joining a blade to a handle! Antique terms in a very modern company.

Yet a company that seems to inspire great loyalty in its workers, many of whom spend decades here. You’ll see lots of photos around the place of personalities who are nowadays associated with Newbridge but up there too you notice many pictures of valued employees and there’s a long list of workers named as you enter the building.

We saw the result of their hard work in the shop, including in the Christmas shop. Better not say anything about the latter - don’t want to spoil the surprise for anyone!

All in all, we enjoyed our few hours here even if we had been on our feet for most of it. Soon, we were putting them up at the Tulfarris Hotel and Golf Resort about 20 minutes away at the other side of the motorway. Read my post about the hotel here.
See also: Museum of Style Icons
Tulfarris Hotel & Golf
Dining at Russborough House