Jutting into the Wild Atlantic. Delightful Pieces of Donegal


Jutting into the Wild Atlantic. Delightful Pieces of Donegal 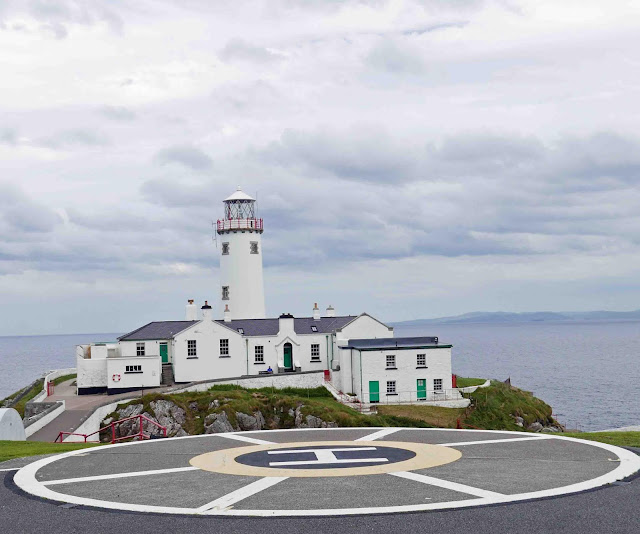 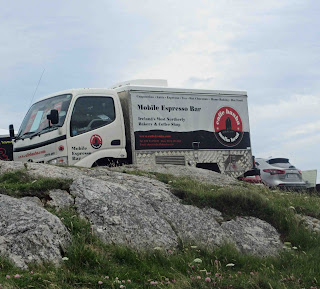 Jutting into the Wild Atlantic are three of the most beautiful pieces of Donegal: Inishowen, Fanad (and it’s spectacular lighthouse) and the petite and pretty Rosguill. Inishowen, with Ireland’s most north-westerly point Malin Head, is the biggest, Fanad (and it’s spectacular lighthouse) is next to the west and then comes tiny Rosguill (a micro-version of the others).

Malin, aside from the remains of an old signal tower and some more modern and equally wrecked Irish army lookout sheds, has no buildings on the head. But it does have Ireland’s most north-westerly bakery and coffee shop parked right up there. Also a curious sign saying Eire 80, a wartime note to German pilots saying that this is Ireland and keep your bombs at bay. These white-painted signs, designed to be read from the sky, were all around the country. Malin though has plenty of walks around the head, all nicely laid-out and signposted. The views are spectacular.

And, in the nearby village, it has one of the most innovative cafés in the country in Wild Strand where seaweed is the essential ingredient.

Having reached Malin, you need to drive all the way back down towards Letterkenny to get to Fanad. You can also shorten the trip a bit by taking the ferry from Buncrana across Lough Swilly to Rathmullan. In any event, the ferry times didn’t suit us on the day so we drove the long way and then all the way up to Fanad.

Sat-Nav wasn’t cooperating that much and we had to rely on the road signs and eventually we were on the long road in. Thought we might be late for the last tour but there were a few more scheduled. Bought our tickets and walked up to the lighthouse. Like quite a few other lighthouses, Fanad now has apartments to rent. 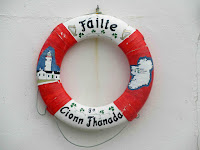 We didn’t disturb those residents though as we took the tour. Our guide gave us the history telling us that, after a two-year build period, it got its first light in 1817 but had no electricity until, believe it or not, 1975. In between, the biggest storm that struck was Debbie in 1961. By 1978 only a Principal Keeper was retained in Fanad, and when he retired in 1983 the lighthouse was reclassified as an Attendant station and the retired Principal Keeper remained on as part time Attendant. Now there is just a caretaker.

We climbed the 79 cantilevered steps to the top and, from behind a glass enclosure, took in the views all around, especially Malin Head to the east and Tory Island to the west. We were shown four tiny bulbs, hardly as big as my little finger, in the lamp. But these are powerful little fellows and their light shines over 18 nautical miles, just over 33 kilometres.

The two wrecks whose memory is enshrined in local folklore are those of the Saldanha in 1811 and the Laurentic in 1917. The Saldanha, a Royal Navy Frigate of 38 guns and a crew of about 300 men, was driven by a north-west gale on to rocks off Ballymastocker Bay on the night of 4 December 1811 and that led to the erection of the lighthouse.

But the lighthouse was powerless to prevent the sinking of the armed merchant cruiser, the Laurentic, on on 25th January 1917, when it hit two German mines at the mouth of the lough and sank with the loss of 354 crew. A 6-inch gun from this ship was recovered a few years back and is now on display on the pier in Downings.

Soon we were on the way to Rosguill, the journey cut short thanks to the Harry Blaney Bridge.  This spans Mulroy Bay (there is water everywhere here!) and connects the Fanad peninsula to Carrigart Village and Carrigart is just a few minutes from Downings at the neck of the Rosguill peninsula.

Lying between the Fanad to the east and Horn Head to the west, Rosguill is surrounded by the Atlantic. Beautiful ocean panoramas, white beaches and even that distant Harry Blaney Bridge are among the sights you’ll see as you do the short circuit (12 km). Might walk that the next time! Small and pretty.

After a long day at the wheel, we were glad to check in at the Rosapenna and take it easy for a while before heading out for food (and a couple of glasses of Kinnegar beer) at the excellent Grape and Grain, reviewing the amazing sights we had seen and enjoyed that day in north Donegal.
Also on this trip: Kinnegar Brewery
Mary T. From Mallow to Donegal's Castle Grove
Something fishy going on in Donegal
Superb Day Out at Oakfield Park & Buffers Bistro
Downings. A Great Base for Donegal Visit