Kinnegar's Winning Team. A Squad for all Saisons.

Hard work. Attention to detail. That’s what we saw when we took up an invitation from Libby and Rachel to visit the Kinnegar Brewery in Letterkenny. Libby was on hand to show us around and introduced us to Rick and some of the brewers.

Hard work? You have to be willing to put your shoulder to the wheel here, well not exactly the wheel but those bags of malt come in 25 kgs size and quite a few need to be regularly hefted to where they’re needed!

Attention to detail? Success in many fields is built on this and Kinnegar is no different. Take a look at a notice of work for one area on the day: clean general; arrange utility room; order boiler diaphragms (steam jacket); hops racking. David is a master of detail. He joined the brewery early on as a JobBridge intern. A quick trainer, he is now of four brewers here and was working on K1 as we arrived.

Better explain. K1 is the small brewery from their farmhouse days in nearby Rathmullan and the name Kinnegar comes from the nearby beach of that name. We are in K2, huge by comparison, a magnificent illustration of how far this enterprising brewery has come in a six year span.

K1 (10 hectalitres) has been brought here and given its own space in Letterkenny. Dwarfed by K2 (35hls), it will have a special place and will be used to try out innovative beers for many years to come, thanks in large measure to David who was close to completing the re-assembly here. Indeed K1 looks brand new. They will also bring in and use their first brewery, a 0.5hl unit, now known as K0.

Links with Rathmullan are still strong thanks mainly to Libby’s mother Margaret, 80 years of age and still working on the brewery books, happy to do so in the quiet of the countryside.

With the opening of the new state-of-the-art facility K2, the clinking of bottles coming off the line no longer mingles with the bleating of sheep from the surrounding fields. Yet “the farmhouse ethos at the core of what we do however remains the same”.

While I expected to see a spanking new brewery, my jaw dropped on entering the unit. It is huge, at least to my eyes, and of course, it was a huge investment leap for Libby, Rick and Rachel when they ordered the gear from Slovenia. But so far so good. So very good.

I reckon I was one of the first to sing the praises of Kinnegar beer as I came across them in various places around Downings in June 2013. One of the places was the Cove in Port na Blagh where I worked my way through the ales, the Limeburner Pale Ale, the Scraggy Bay India Pale Ale and the Devil’s Backbone Amber Ale. Thought all three were excellent.  My number one went to the IPA while CL picked the Limeburner, the same two beers that we enjoyed this time around.

We had no problem finding them this time, in bars, in cafés such as Buffers, in restaurants like Grape and Grain, in the splendid country house Castle Grove and in the Rosapenna Hotel. Enjoyed Scraggy Bay India Pale Ale (me) and Limeburner Pale Ale (CL) in particular. These two, along with Devil’s Backbone (Amber Ale), Rustbucket Rye Ale, Yannaroddy Porter, and Crossroads American Style IPA, form their core range.

And they do specials. Lots of them! Hard to keep up. Just a few to note that I’ve liked: the Merry Tiller Dry-hopped Saison, Bucket & Spade Session Rye IPA and the Black Bucket Black Rye IPA.

Balance is a feature of Kinnegar beers and that Black Rye IPA is a great illustration, hoppy, citrus flavours, quite intense (it is the big brother of the original Black Bucket!), quite superb.

Hadn’t come across the Kumpelnest Pilsner (5%) until this trip. Wasn’t expecting too much but reckon me and this one could be the best of buddies. Nothing dominant or over the top about it but with its persistent and pleasantly moderate aromas making an excellent first impression, we were on the right hop from the off. And those first fruity flavours are also persistent as my new buddy shows staying power. Good finish too. Buddy sure won’t let you down as you can see from the illustration on the can, he has lots of friends! 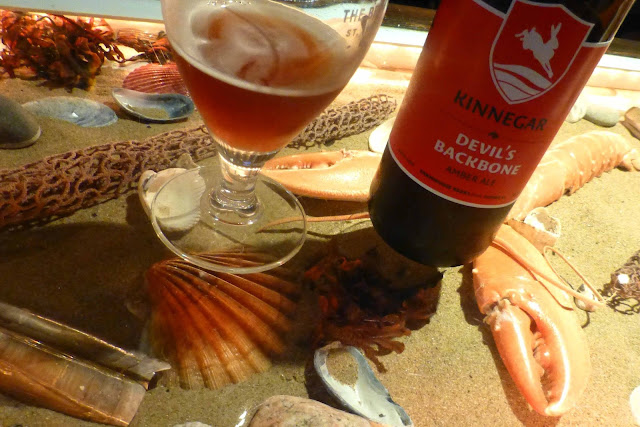 And speaking of friends, how did Kinnegar come together? Libby had her own graphic design company (and those skills would come in handy) but it was Rick who had an interest in craft brewing and spotted the new wave coming. Rachel was a pro in the world of horse; there was a bit of a downturn in that line and she was looking for something with a scientific angle as that was her long time interest and, having worked with horses, she had no problems with taking her turn at the physical side either. The timing was so right for them and Kinnegar was the vehicle to take them (and their now ten permanent staff) upwards and onwards.

Nowadays, everyone contributes to the ongoing development though Rick is the leader on the beer recipe side. By the way, they don’t filter or pasteurise, and let their industrious little friends, the yeast, carbonate the beer naturally during fermentation.

Libby told us that Kinnegar are that bit different to other breweries in that they built their business on bottles and cans rather than draught (they do draught of course). Their bottling line is a Meheen, “one of the two busiest in Europe” while their own canning line is a Wild Goose.

Bet you didn’t know this. Working these two lines requires different responses from the operator. Libby explained that the bottling line is more physically demanding while the canning operation taxes the mental side more! Different strokes for different folks or vice versa. Just goes to show the value of teamwork and Kinnegar have quite a squad in place in Letterkenny.

Also on this trip: Mary T. From Mallow to Donegal's Castle Grove
Something fishy going on in Donegal
Superb Day Out at Oakfield Park & Buffers Bistro
Malin Head, Fanad and Rosguill Peninsulas
Downings. A Great Base for Donegal Visit