What To Drink When You’re Not Drinking.


What To Drink When You’re Not Drinking.
Taste Better Than Previous Efforts. Look Better Too!

While settling up after a recent lunch at Kingdom 1795 in Killorglin, we began talking to Suzi about non alcoholic drinks. She and chef Damien, who have put so much into this lovely new restaurant, carry a selection including Stonewell NA Cider, Seedlip and Heineken Zero.

I first came across Seedlip a couple of weeks back at lunch in the Whale’s Tale Bistro in Clonakilty. This was the Garden version, the company do two others: Spice 94 and Grove 42.

So where did the name come from? Seedlip: Over three hundred years ago, it was common for physicians to distil herbal remedies using copper stills, harnessing the power of nature & alchemy to solve medical maladies. In 1651, one such physician, John French, published The Art of Distillation documenting these non-alcoholic recipes. At that same time, a family in Lincolnshire had started farming, hand sowing seeds using baskets called ‘seedlips’.

Today, you can find Seedlip in quite a few places and it does indeed give you a choice. The Whale’s Tail version was a substitute for gin and served in the big fashionable gin glass. I tasted it like that and it did seem a bit “vegetable” - there were a few slices of cucumber in there too. But once the Fever-Tree Elderflower was added, the magic happened and the combination was just excellent, very acceptable indeed.

In Kingdom 1795, I tasted the Spice version neat, very aromatic and you could easily see how it would be the basis for an excellent drink. Again, Suzi suggested the Fever-Tree as an ideal companion. No wonder the Seedlip company reckon they have the solution to the question “what to drink when you’re not drinking” #wtdwynd

There is a Seedlip rival on the market also, marketed as a non-alcoholic gin and called Ceders. I was talking to Michael Creedon of Bradley’s (North Main Street, Cork), about things non-alcoholic and he says there is a a definite trend in that direction. He has non-alcoholic wines in stock and also the Ceders. 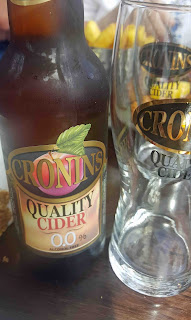 When we departed Kingdom 1795, we went for a superb walk in the sun on the stunning Bray Head (Valentia Island). On the way back, we called to the Glenbeigh Hotel, again looking for a non alcoholic drink. And right in front of us, on the counter of the old bar, there was a card full of suggestions (Coca Cola suggestions, I think). The driver tried one, the South African “Appletiser”, a sparkling fruit drink with carbonated water, and it went down well. We also saw the non alcoholic Cronin’s Cider (bottled in Wexford) but too late!

We went upmarket later on that night. In the bar of the Europe Hotel - probably the best hotel bar in the country - we checked out the offerings. They have a terrific cocktail list - I can recommend the Brandy Alexander and the Negroni - that includes a choice of non alcoholic offerings including a long and delicious apple based one with ginger and lemongrass (the name escapes me). And we were also offering a zero alcohol wine.

They also carry the Erdinger NA beer, quite a good one too. I also find the Paulaner a handy substitute from time to time. And yes they support local here with normal strength beer on draught from Killarney Brewery and bottles of the NA Cider by Kerry based Cronins.

We also tasted that cider at lunch in Dingle’s Boatyard the following day. It is refreshing, somewhat drier than their regular 4.5% offering, and not bad at all. It does come for some reason in the smaller 330 bottle.

Back in town, after the Kerry break, we called to O’Brien’s in Douglas. They carry the Seedlip drinks and indeed say the non-alcoholic drinks in general are flying, so much that they have to work hard to keep on. They have quite a few non-alcoholic wines including some from Torres and three that they bring in themselves.

Just the other night, we were going through the drinks list in the Springboard Restaurant in the Kingsley Hotel and spotted a trio of non-alcoholic cocktails (not too many places are using “mocktail” these days). They have the Shirley Temple and the Fishers and the Nojito, the latter an amalgam of mint, fresh lime juice, sugar and soda water.

So there you are. Just a sample of the many alcoholic options out there now. Now you know #wtdwynd. Enjoy.

Tara Foster Cool! I actually don’t really drink but I’d also like to suggest a few of my favs. (I live in Australia but if you can find these in Ireland, you’re laughing). Lemon lime in bitters. Absolutely appropriate stock standard best housemade Aussie pub drink that ever existed. Kombucha- this has taken off in Australia and is now on tap at some places. It’s full of probiotic goodness and a cure for any upset stomach - note: not all kombucha are created equal.
August 30, 2019 at 10:17 AM