A Can of Bass and A Swallow in a Country Pub. My Nire Gap Walk. Thirsty Work


A Can of Bass and A Swallow in a Country Pub
My Nire Gap Walk. Thirsty Work.

We saw a swallow in a country pub. Well, you would wouldn’t you, lots of them! Sorry, not that kind of swallow. It was the one that can fly!

Let me start at the beginning, that very morning when I,  as fresh as a daisy, left Cork; I was heading for the Nire Valley in West Waterford with a plan to walk the Nire Valley Gap. 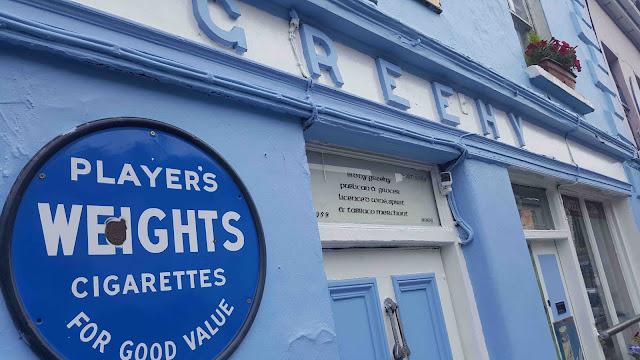 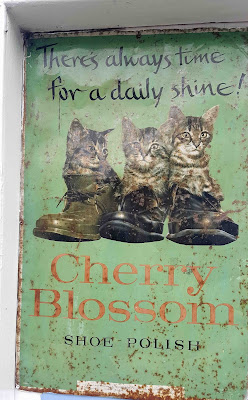 First call though was to Lismore, a lovely town with many attractions including the castle, the cathedral, the park, its location on the Blackwater River, its cafés (even without the much lamented Chop House) and its hotels (including Ireland first purpose built hotel).

What attracted me most this morning though was the frontage of Biddy Greehy’s Public House and Grocery. This famous pub lasted from 1952 to 2003 and the current owners maintain the window displays – now part of their home – as they would have appeared in the middle of the previous century: all manner of wine and beer containers (including a can of Bass that looks more like a can of paint), tobacco boxes, shoe polish tins, snuff and wine corks and so much more.

After a “considerable” delay there looking at the old curiosities, we headed to nearby Cappoquin and enjoyed a delicious lunch at Barron’s Bakery (one of the oldest if not the oldest in Ireland).

About 30 minutes later, having passed through Ballymacarbry and passed Hanora’s guesthouse, we arrived at the Nire Valley Car Park, the Sat Nav lady working very well indeed on this occasion. It was a warmish but grey day. I'd have preferred a bit more light for the photos but locals said later we were lucky the sun wasn’t out as it would have made the trek very difficult.

Anyway, we changed the footwear, sorted out what to carry (water, for sure), picked up our sticks and headed into the hills. A few walks, mainly big loops begin here, but we only had eyes for the Gap Walk, the shortest and most straightforward one. The opening stretch was perhaps the toughest and we rose rapidly with our view expanding all the time, the car park quickly becoming a dot below.

Once we went through a stile, the walk through the Comeraghs became easier as we were now walking across the slope, mainly on a grass surface with lots of sheep and those Comeragh lambs around us, red splotches of paint marking them now (they had been blue before the stile). Lots of stops for photos and we were delayed by having to skirt around some boggy bits (there had been very heavy rain two days earlier). Some watery bits had permanent timber platforms across to help the walker. 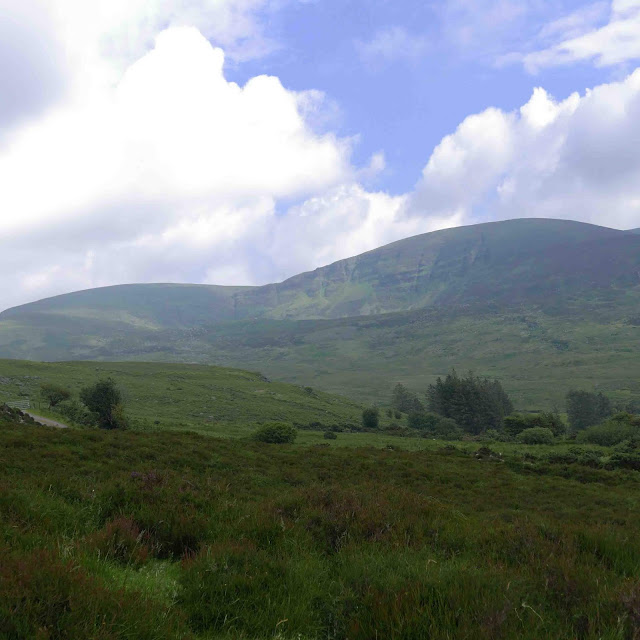 In the mountains, of course, you think you are near your destination, that the height ahead is the final one. But that is seldom the case. We were wondering were we ever going to get to the gap!

Then we met a small group who promised us that the cafe at the top was excellent! We checked the remaining distance and they said about 20 minutes. Not very encouraging but, being so close, we kept going and indeed got to that magnificent view out the other side, over the lowlands where the village of Rathgormack is situated.

If you are up to it, you can now go to the left or the right and head off on a loop that will take you back to the car park. But we were just about fit enough to make it back the way we had come and that was the plan in any case.

Of course, the sun began to peep out every now and then and give us a tempting glimpse as to what the lovely area would look like when the sky is clear. So on we went, slowly but surely and we did manage to make it back about 15 minutes outside the maximum of two hours indicated in various sources (the minimum is 90 minutes). But we certainly enjoyed it and I promised myself I'd be back once the weather is guaranteed!

Back to Ballymacarbry now and soon we found our Glasha Guesthouse, a splendid place with the splendid Olive in good form, tea and cake at the ready and we soaked up the now well-established sun in the well kept enclosed garden with the fountain running. Later, she served us an excellent dish of salmon and we washed that down with very nice organic Verdejo from her short list. Not every guesthouse can offer such a service!

Then she suggested a visit to the pub (three minutes away) but said a drink would only be deserved if we competed another walk, a two mile loop around the country roads. We did that as the sun began to go down and eventually headed to Lonergan’s pub across the bridge.

No big selection on tap here  as you might expect and so I ordered the large bottle as the locals do. Indeed, I had a works colleague once, from this area, who was known as Large Bottle. Mine was a Smithwick Red Ale #1 and it is indeed a large bottle at 568 mls (and with an abv of 3.8). Very cool and enjoyable after all the walking.

It was then that the swallow flew in, past us and over the head of the only other customer who was reading his paper before circling the small area and exiting out the front door again to join his feathered colleagues in the dusk. The customer didn’t spot the bird but suggested that since it had left so quickly, it hadn’t liked what it had seen!

Anyhow that led to a chat with the customer and the barkeeper about the demise of some birds, including the corncrake. The customer, from nearby Newcastle (Co, Tipperary), said he does hear the cuckoo from time to time.

That got us on to Old Moore’s Almanac, for some reason. I remember using that little magazine to try and pick (without success) the Grand National winner. It is still being published apparently and its latest success according to our fellow customer was in predicting that Prince Philip wouldn’t be well enough to greet President Trump. I reckon Philip was happy that that one came true!

Plum Wine. Sparkling Apple Juice. The Butler and The Queen. Fruit Cakes and Steeplechasers. All in a Tipp Day-trip