The Coast of Clare


The Coast of Clare

The coast of Clare provided the backbone for our journey in May, beginning on the Clare-Galway border, calling to the Flaggy Shore and the Fanore Beach, a quick trip inland to Lisdoonvarna, then the pier at Doolin, skirting the cliffs of Moher (we had been there a couple of weeks earlier), then a call to Ennistymon and its cascades, roadworks meant we didn’t get near Doonbeg; then we visited Loop Head Lighthouse (just about able to see in the fog) and we did call to the Bridge of the Rosses before continuing on via Carrigaholt and Kilrush to end up at Bunratty.

Lots of good food and good lodgings over the three nights and four days and more on that later. We left Cork early on day one and our first stop was about noon at the amazing Hazel Mountain bean to bar chocolate factory.

In Ballyvaughan, I saw a crow walking behind a heron who was stalking prey in seaweed at the edge of water. Each move that the heron made was “copied” by the crow. The heron seemed to get fed up of the unwanted company and flew across a narrow stretch of water to the opposite shore. On the ground, the same scenario happened again. This time though the crow got even closer and the heron flapped his wings at his “shadow”. Still, the crow stayed close. Eventually, the heron took off on a longer flight out over the water and parallel with the shore. The crow followed suit but only for a brief spell before turning back and landing on terra firma. Perhaps he wasn’t too happy with the flight over the bigger expanse of water. I reckon the heron was happy to have seen off his tormentor.

We had provisionally noted Ballyvaughan for a lunch stop but were in no mood to eat anything after all that delicious chocolate! The Tea and Garden Rooms were closed for the day (May 1st) but the Monk seemed to be getting takers for its lobster offering (49.50) and its promise of a taste of Irish beers.

At the Flaggy Shore, we had a view of Galway across the bay, not the clearest as the day was getting duller. Does anyone know how it got its name? I couldn’t see any reason to call it flaggy. After passing the Black Head we arrived at Fanore Beach. Here, there is no shortage of flat rocks. The dunes are of some importance though that doesn’t seem to hinder the congregation of caravans and mobile homes. Some fine walks around here also, starting in the beach car park. The River Caher, the only river in the Burren to run its entire course overground, enters the sea here.

As we drove down the coast road (R477), we thought we’d make a visit to Lisdoonvarna to see the Curtins. Birgitta was not at Burren Salmon when we called. Here, all visitors have the chance to see a short video on how they produce their famous smoked salmon. We enjoyed that and the tasting that followed. Couldn’t make our minds up between hot and cold smoked so we bought both along with some trout and mackerel.

Since we were so close, we decided to walk up to the Roadside Tavern to see Peter and who did we meet on the way only Birgitta. Had a small tasting of their amazing no-hops beer and then a wee chat with Peter who was asking for Jack Lynch, his fellow micro-brewer from Mayfield (Cork). More on Peter’s beer here.

Back then towards the coast and our base for the night, the absolutely splendid and very highly recommended Sheedy’s B& B in Doolin. And also highly recommended, for dinner, is the Oar Restaurant (a short walk from the B&B).

The following morning, after a delicious multi-choice breakfast at Sheedy’s, we spent a short spell on the pier at Doolin, watching the ferries coming and going from the Aran Islands. Then a narrow road took us high into the hills, past Doonagore Castle, and eventually we had great views of the three Aran Islands. Soon we passed the Cliffs of Moher (again, we had been, as we had been in the Doolin cave, a couple of weeks earlier). See account of earlier trip here.

Time then for a bite to eat and we thought of the Little Fox in Ennistymon. Seating and tables are fairly basic here but the food is the luxury. Some lovely dishes on the menu including Campfire beans with garlic yogurt, basil oil, Inagh Free Range Sausages, with fried egg on Hugo’s Sourdough. Another dish to catch the eye was the Mohammad’s Flatbread, with roasted squash, crème fraiche, fried egg and garden greens. Alas, breakfast in Sheedy’s had been so good, we could only manage a cup of locally roasted coffee and a delicious lemon cake.

We almost forgot to check out the town’s famous cascades, just a very short walk from the main street. The water pours down a series of natural steps. Spectacular stuff in the middle of the town, well worth a detour. Speaking of detours, the next one took us well away from Doonbeg and the west coast, even down to Kilrush before heading back towards beautiful Kilkee. With the weather closing in, we headed for the Loop Head Lighthouse.

The rain stopped for a spell and then it got a bit brighter but the improvement didn’t last and it wasn’t at all good when we paid our fee (a fiver, I think), for the tour. We were told what we could have seen! Very tantalising, having climbed over 70 steps. But that’s nature! She doesn’t have to perform just because the tourists are in town. The weather had eased somewhat as we walked, on a hard path mostly, over by the Bridges of Ross, a spectacular coastal landscape, amazing rocks and at least one big arch.

Back then to village called Cross where we had booked into the Old School B&B. Here again we had a great host in Ian and also his wife Teresa (whom we had met earlier in her part-time role as lighthouse guide!). Headed up to Kilkee for the evening meal and the crab claws were the highlight of our meal in Naughton’s Bar in the town .

The following morning found us on the road east, close to the north bank of the mouth of the Shannon, the giant stacks of Aughinish Aluminium visible at almost every turn. Our first stop was to see the ruins of Carrigaholt Castle. A man was busy in the seaweed below, working hard shifting and shaking bunches of seaweed. He told me he was foraging for periwinkles and seemed to be quite successful on the sunny morning. 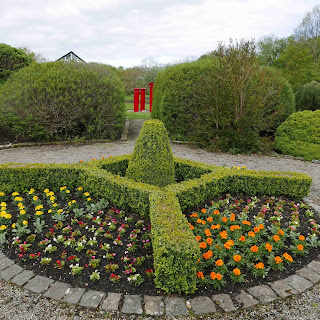 The sun stayed with us as we arrived in Kilrush to visit the Vandeleur Walled Garden (no charge). The Vandeleurs, planters in the 17th century, were well established here for hundreds of years but their reputation was severely damaged with mass evictions during the famine period. Now though, this is a peaceful colourful community place with that historical garden, a bistro, a garden centre and woodland trails. Well worth a visit.