Every now and then the young chefs of the Market Lane group get a chance to shine. The latest came on Monday evening at the Castle Café at Blackrock Castle where, under guidance from Executive Chef Stephen Kehoe, Sara Movilla Cobo, Jose Emilio Escobar Garcia Prieto, Marc Montserrat Vila and Marc Oliveras Duran, cooked a Catalan meal for a full house.
The four have become a core part of the team at the group (which also includes a micro brewery and city restaurants Elbow Lane, ORSO and Market Lane itself) as a result of the excellent recruitment programme that the group has had with CETT (Campus de Turisme, Hoteleria i Gastronomia) University in Barcelona since 2017. 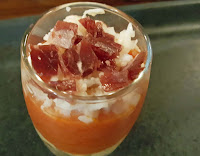 That full house included Market Lane’s Conrad Howard. He was excited as any of the guests as he welcomed us and looked forward to the evening, the fourth in what has become known as the Chef Sessions. Neither he nor we would be disappointed.
We got off to a good start with a glass of Kir. Soon the breads were on that table and soon we were trying them. The selection of Spanish and Irish breads were accompanied by some lovely butters, one featuring beetroot, another garlic and kale, the third mushrooms. And they went down well with a glass of the Elbow Lane red ale.
Next up was the Salmorejo, a cold tomato soup with olive oil. It was served with cured Spanish ham (on top) and a boiled egg (at bottom). Enjoyed that and also the Black pudding, scallop and pickled carrot tapa.
There were no less than five “units” in the next serving session. The highlight for me was perhaps the Courgette cannelloni with Cashel Blue cheese, a beautiful combination. The most unusual was the Kokotxas al Pil Pil. Kokotxas is goats neck in garlic oil, with an emulsion of olive oil and garlic and basil.
Also included was a cube of Foie Eel Apple, layers of eel and thinly cut apple with a caramelised top; a Croqueta de L’avia (traditional); and a Seafood Paella. 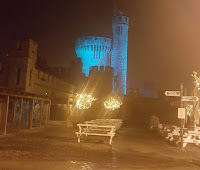 All the while, we were sipping our wine, two organic gems imported by Le Caveau. The red Almate has been described as “as outstanding within its type and style” and it certainly lived up to the Spanish Wine Lover description. The white, Château Beauregard Mirouze Campana blanc from Corbieres, was aromatic, elegant and with a long finish.
We were getting to the serious end of the evening now and our fish course was Hake with five sauces. I particularly liked it with the fennel. The meat was a well cooked piece of pigeon, served with pack choi and pear. 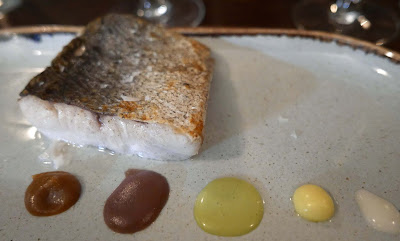 Getting full now! But dessert was on the way and a nice one it was as you can see by the top photo. And then there was a selection of petit fours to sample: a Hazelnut Financier, Bailey’s Bombon, and a Panellet. The latter is  the traditional dessert of Catalunya. I think with all the delicious food displayed by the chefs at the Castle, a move to the north east of Spain would be no hardship at all. Meanwhile, we can all look out for the Spanish influence on the menus of the Market Lane group.