Morning at Hegarty’s Cheesemakers. In Whitechurch with Jean-Baptiste


Morning at Hegarty’s Cheesemakers
In Whitechurch with Jean-Baptiste


It is 9.45am when I arrive at Hegarty’s farm on the outskirts of Whitechurch, less than twenty minutes north of Cork City. Here, I’m greeted by Dan Hegarty, the frontman for their magnificent cheddar cheese that has been snapped up by restaurants and retail customers alike over the past 16 years or so. For the past three years, he has had the considerable help of French cheese-maker Jean-Baptiste Enjelvin.

Jean-Baptiste had been on duty from earlier that morning and he helps me get my kit on as I start to note how he makes their Templegall, a Comté style cheese, which has been getting sensational reviews over the past few months.


The Bordeaux native, who holds a Masters in Agriculture, Food Processing, Marketing and Management, is tasked here with the development of a new range of hard cheeses, including the new one (also similar to Gruyère), speciality cheddar and smoked cheddar.

The focus today though is on the Templegall. The vat, a beautiful 60 year old copper one, is full of fresh milk. The outside is made of stainless steel and temperature controlled water circulates in the enclosed cavity. Patience and timing are key in cheesemaking as is the personal touch, elements all common to artisan food producing. You can have all the high tech gear but a feel for the cheese (in this case) is just as important. Savoir faire is the term Jean-Baptiste uses.


He waits until the milk - the culture and rennet had already been added - thickens, judging how quickly his scoop spins around on the surface. As it slows, he knows the perfect moment is approaching. And when it does, he starts to cut the curds.

The cut for the Comtè style is smaller than that for cheddar. And he can’t afford delays at this point as there is an optimum window of just four minutes. “You have to do it quickly, otherwise the curd is not what you want,” Jean-Baptiste tells me. The more it is cut the more whey is lost and so the dryer the cheese.


And the cheesemaker’s touch is vital here. “You must get it as regular as you can. Too big, you get too much water. Too little could block the mould.”

That done, a paddle attachment starts to spin in the vat and the aim now, as the temperature rises slowly to 56 degrees, is to get those little curds as moisture free as possible. He regularly takes a fistful into his hand, squeezes them to check the moisture. He hands me some to taste. Don’t think he expects me to eat the lot but I do (I've missed my ten o'clock break!), and enjoy it.


In the meantime and as the steam rises, we take a look at the stored cylinders of Hegarty’s renowned Cheddar. They are clothbound, it keeps in the moisture, and Jean-Baptiste is delighted with their progress, pointing to the older ones and telling me he loves the signs of mould and mites! 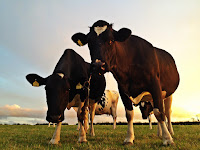 Comté in France is made mostly from the milk of Montbeliarde cows but Jean-Baptiste says they are not necessary to the process here. “We are making an Irish cheese, so we use milk from Irish cows.” And the cows here at Hegarty’s are Friesians. Templegal production in Whitechurch is now winding down for the year as it is only while the cows are out there eating grass that the milk is used for the cheese. “Sileage is not suitable for Templegal,’ insists Jean-Baptiste.

Jean-Baptiste, who plays rugby with a local club, is enjoying “the craic” in Ireland and is amazed how much the Irish love Mediterranean food.

Back to business now as the contents of the vat are pumped into the moulds. The water and the whey are forced out under the pressure and drain away and after a few minutes, during which the cheesemaker is working flat-out, we are left with two wheels full of the cheese solids. Weights and pressure are applied and the wheels are left overnight, during which time the cheese will lose more water.

Hygiene is crucial at every point and now Jean-Baptiste has a lot of washing up ahead of him, even though he has been cleaning up in any spare minute during the past hour or two.

The wheel, which weighs upwards of 40kg, will spend one full day in brine. After that, “you must look after it, wash it every 2 or 3 days as the rind forms. Bacteria will cover the cheese in red and that helps keep moisture in. I don’t want to end up with a cheese with cracks or holes in it!”


So how long will these big wheels be stored for? Nine months is minimum, 12 months is optimum, “18 months, if we can”. That last period though may not suit Dan’s bank manager!

Now I take the gear off and taste a piece of mature comté before leaving. It is exquisite! Very Highly Recommended. Do try and get yours hands on some. I did, thanks to Jean-Baptiste who handed me a large slice of Templegall as we said au revoir!

Brothers Dan and John Hegarty are the fifth generation of Hegarty dairy farmers.  At the turn of the century, they faced a familiar problem on Irish farms. And like many before them, and since, they found a way to diversify and add value by going into cheese production, a solution that allowed both stay on the farm. 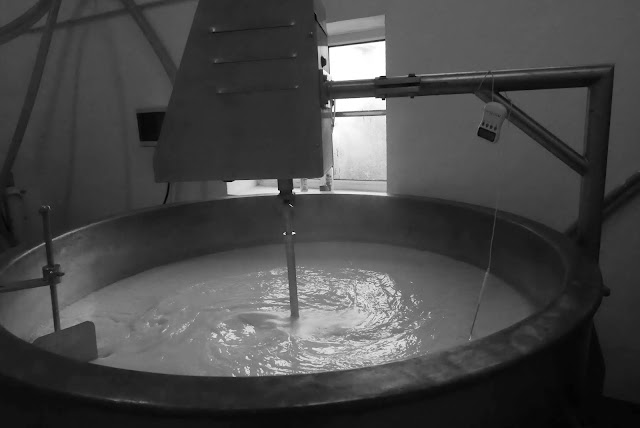