And Farewell to lovely Stanley House

After trips to Three Castles Head and Mount Gabriel and, in between, a lovely lunch at Budds, we were wondering where to eat on our last night in Schull. Had earlier spotted Casa Diego and thought the flexibility (stop when full, maybe!) of tapas might well fit the bill.

They certainly did. Aside from a long list of tapas they also do a more structured meal with starter, mains and so on. They have an indoor dining room and also a bunch of tables on a sheltered sloping garden. And it was the open air venue that we chose.

And choosing from the long list wasn't easy as there were many tempting dishes there, everything from Banderillas (a small skewer containing spicy crunch cocktail onions, peppers and olives) to Chorizos a la sidra (chorizo in cider) to Gambas al ajillo (local scampi in garlic, virgin extra oil and chilli).

The wine list isn't as long but I did spot a favourite, the Semele, with its distinctive design, the letters forming a person drinking. Karwigs import this and it has a complex nose, well-ripened red fruit, and is dry, with a well-rounded finish. Certainly enjoyed that. 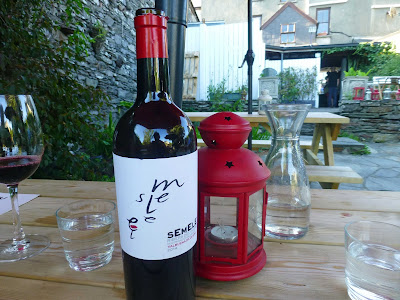 We started with a selection of the tapas and later ordered more! Favourites included the Pimientos Rellenos (Piquillo peppers with a selection of mushroom or vegetables); the Huevos Estrellados (Fried eggs with potatoes and Iberican ham); the Michirones (Fava beans stewed with cured ham, potatoes, chorizo and bay leaves); the Embutido Ibérico (a massive plate of Spanish chorizo, lean pork sausage with coarse black pepper, and Iberican Ham); and the Berenjena Rellena (stuffed aubergines wth minced meat and homemade tomato covered with melted parmesan cheese).

The only bum note was struck, surprisingly, by the Patatas Bravas. You get a plateful of the spicy cubes but most of the bigger cubes weren't fully cooked. Still, we had more than enough from the smaller ones as the plate was big and packed.

Service had been friendly and excellent throughout. When we went up to pay we were told they didn't accept credit cards. Had we been eating in the inside room, we’d probably have seen that on the door. We were told there was an ATM in Centra, just down the street. So we walked down there and brought back the cash to the friendly trusting folks in Casa Diego. By the way, L’Escale, on the pier, is another restaurant that doesn’t take credit cards.


On the following morning (Sunday), we said goodbye to Nancy and her lovely Stanley House on the Colla Road. Our room had a gorgeous sea-view as had most of the outdoor areas and gardens. They cook an excellent breakfast here too and Nancy is very helpful with directions and tips on what to do in the area. 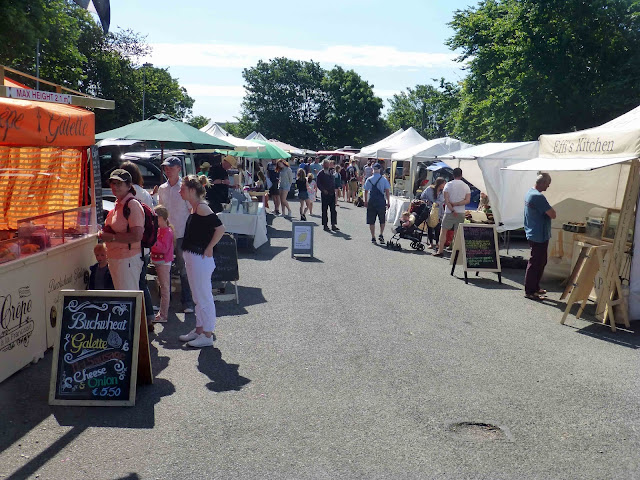 Still time to call down to the Country Market which is held every Sunday morning in summer. Lots of good things here from homemade baking and jams to a full sized Gubbeen stall where we lingered awhile, tasting a smashing two year Coolea with Tom Ferguson himself. Filled a bag there and then took a final walk along the shore. Didn't get too far in the sun. Just sat down on one of the many seats and watched some swimmers come in after what looked like a long one.

The market was even busier as we walked back to the car park and set off towards the city.

Gubbeen Farm Visits. Cheese and charcuterie.
Budds Ballydehob for Lunch. Sandwiched between a couple of climbs!