Budds Ballydehob for Lunch. Sandwiched between a couple of climbs!


Sandwiched between a couple of climbs!
When I knew I was heading for Schull, I put getting up to Mount Gabriel on top of my list. But, on Saturday morning, we headed south instead from the village with the Three Castles Head the immediate objective. Gabriel would have to wait until the afternoon!

Three Castles Head is in the Mizen area. Having passed through Goleen, you come to a cross where your turn left for Mizen Head and straight ahead for Three Castles Head (which is also signed). There was a cycle race on the road so the trip was very slow.

You will come to Dunlough Bay and a rough car park. Open (and close) the farm gate and follow the few well placed arrows. Firstly, the walk is on a path across fields and then it gets a little (just) rougher.

You’ll pass the white buildings, including the cafe, named after the head and open only in summer. A notice requests a voluntary contribution (3 euro is suggested) as you pass through a narrow gate on the farm.

I didn't time the walk, but after 25 minutes or so, the three castles will come into view, suddenly. Their situation is quite spectacular and you also have great views over the nearby ocean and into Dunmanus Bay. The three ruins are known collectively as Dunlough Castle and are located at the most westerly point of the Mizen Peninsula in West Cork. You have excellent views also over Mizen Head including its lighthouse structure.

You may continue your walk up and beyond the castles, up towards a cairn on top of one of the peaks. Some detail via an Irish Times article here.  I did go up a little beyond the castle before turning back. 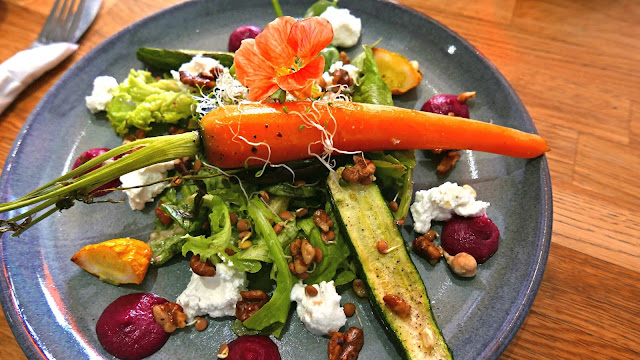 It was coming close to lunchtime but reluctantly I passed the café which had been highly recommended by locals. I had promised myself I'd call to Budds in Ballydehob who, as one of Cork’s cafés of character, were supporting the Cork Summer Bounty Week.

A group of cyclists were having lunch here too so it was busy enough. I read the specials and my server pointed out that most of their produce was local. I picked the salad which featured Lea’s baby carrots and squash, Macroom buffalo ricotta, on a bed of local mixed leaves with beetroot and balsamic purée, walnut and Portobello mushroom. 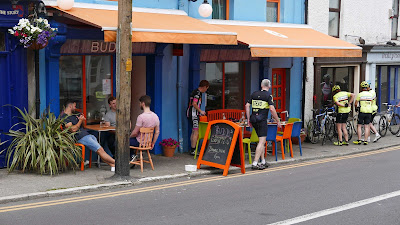 The carrot was rather a big baby but quite a tasty one, the mushroom was superb as was the ricotta and all the leaves were as fresh as could be. All in all, a lovely summer lunch. CL also hit the jackpot with the Wagyu Beef burger, with local black and white pudding, and smoked Gubbeen cheese. An expresso later and we were on our way to another climb!

We checked with the tourist office as to the best road in to the foot of 407 metre high Mount Gabriel (you can drive to the top) and the man on duty was delighted to tell us as he lives in the area. The “mountain” is well-known for its two radar domes (aviation tracking) on top and lesser known for the fact that, in ancient times, copper mining was carried out here. 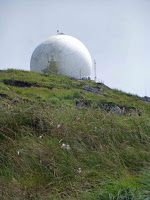 Every time I've seen it while in Schull, I had imagined the views from its would be great. Now I was on my way and while some low cloud had intervened the views were still stunning even if the domes and their fences are not and could do with a spruce up.

Back then to our lovely guesthouse, Stanley House, for a break and a shower before heading out for more food!