Glendalough Gin. The Wild One


Glendalough Gin. The Wild One


Glendalough Distillery who, like St Kevin, are soon (well maybe within a year or two) about to move to a permanent home with a great view over the area, use foraged botanicals in their core gin, the Wild Botanical Gin, know all about timing.

Whether in the wood or the mountain or in the distillery itself, timing and that personal know-how is crucial. Both their forager Geraldine Kavanagh and their still-man Rowdy Rooney have that know-how in spades as we found out during a mid-week visit.

One of the founders, Gary McLoughlin, greeted us and introduced us to Geraldine who already had a car load of foraged stuff. She would lead us on a walk through the wooded Glendalough estate and we filled our baskets. Soon, I knew I was in the “wild” when a doctor fly - haven't seen one in years - bit me. Saw quite a few after that but no more surprises.


We passed a few beech trees and were interested having been earlier introduced to their Beech Leaf Gin. It is a limited edition with a “beautiful colour” said Gary. Geraldine: “There is just a small window between late Spring and early Summer when the leaf is at its best, when they are soft and good.”

No point in adding them to our baskets now. But we did add wood sorrel, honey suckle also known as woodbine, and wild blueberries (also known as bilberries or fraughan). Timing again came in to with the latter as their season is just starting and we didn't get that many. On the other hand, the elderflowers are at the end of their season and the wait is on for the berries.

By the way, the sorrel is from the same family as the shamrock. And another note: the Booze Travellers, who visited Glendalough, had a lot of fun with the fraughan (with the word, that is) and you can see it on video here.


Geraldine was “always an outdoor girl, always into wild food from the hedgerows. Wild plants have a better immune system.” After a wild food hunt in May 2011, a bountiful summer, she started doing tours in season and that led to her starting her wild food business. Soon she moved to alcohol finding it “a lazy though interesting way of preserving.

A few years later, Gary and his partners bought a still and started making poitín. “We always had whiskey in mind as well and gin of course. But we always wanted to do something different, something interesting. Why not use the bounty of Wicklow, we thought”. And that was how they linked up with Geraldine.

All four partners, though from differing business backgrounds, “have a great passion for the industry” and now all are full-time with the distillery. “It’s been an exciting journey,’ said Gary. “We are now into 36 countries and growing. Our Irish foraged gin opened doors and it’s just go, go, go.” 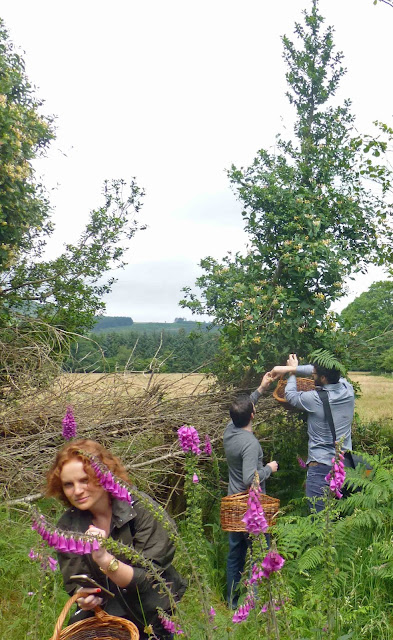 One of the aims of the distillery is “staying true to the tradition and heritage of our ancestors”. The most famous of those was St Kevin who features on the bottle. Kathleen of the Spirits figures somewhere in the legends of Kevin and no surprise that distiller Rowdy named his still after her.

“It is a hybrid,” he told us. “It combines pot and column, a wonderful piece of kit, functional, versatile and pretty!” The initial spirit is made from Irish grain and most of the botanicals, including many of the foraged ones, are added as the process begins. The more delicate botanicals, such as rose petals, have their own later place in the process, and their aromas and flavours are gently extracted by vapour.

The main botanicals in gin are pretty well-known. Glendalough’s juniper is foraged and comes from Macedonia. Their high quality coriander is farmed in Bulgaria. The third main ingredient is Angelica Root from Poland; it has a flavour binding quality (not scientifically proven!) and adds its own natural earthy flavour. Orris root is another common ingredient, dried in the Morrocan sun for five years, and is “very expensive!”. 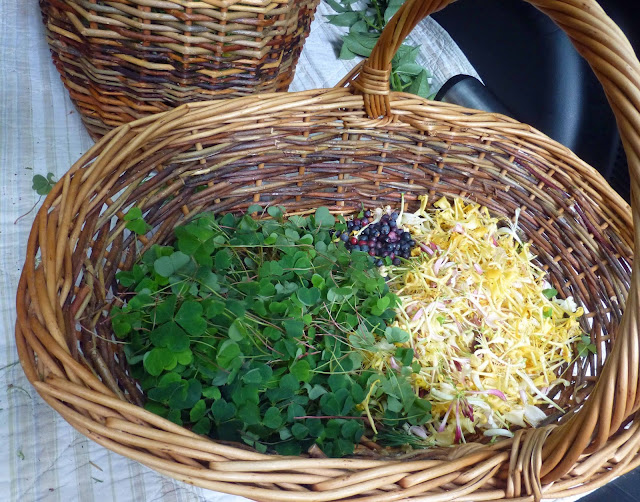 And as the process comes to an end, the importance of timing features. Rowdy uses his experience plus his smelling and tasting skills to determine when to divert the heads and the tails and leave the liquid he’ll use in the main receptor. “Unlike some, we don't reuse heads and tails. It’s a no brainer for a premium product.”

Rowdy told us he was looking forward to the day when they set up on their new site, a hillside that we would see after lunch. He can't wait for their new garden where himself and Geraldine will grow lots of wild things, “including juniper”. Garry and his partners have indeed very exciting plans for the site and the excitement is building even though its early days. But 2014 was early days too!

Before a lovely lunch at the Wicklow Heather, we enjoyed a gin tasting, going through the four seasonals. The refreshing Spring with gorse (lovely aromas and flavours) and other ingredients (including dandelion). Summer with elderflower predominant, pine, roses, woodruff, lemon verbena and fresh lemon. Get the picture!


In Autumn it is berries, heather, rose-hip, yarrow and crab apples. Seasonal for sure. Winter is earthier, sloes, haws and a little warming spice, a great cocktail gin!

And then we had the pride of Glendalough, the Wild Botanicals Gin, “a gin for all seasons” according to Gary. “Its nose has the freshness of spring, on the palate you have summer flowers and autumn fruits and then the winter spice. Try it with Poachers Tonic.” We did and we could see why it is going down so well at home and abroad. But Glendalough won't abandon the seasons series. “Seasons are brilliant and we will always do them.”


Their gin range has a few more. I earlier mentioned the Beech Leaf but Gary obliged us also with tastings from their Dillisk Gin and their Sloe Gin. The sloe had remarkable aromas and Garry advised trying it with a little apple juice.

So lots of fun and enthusiasm at Glendalough but lots of know-how as well. Let the journey continue, the story spreading from the lovely hills and lakes of Wicklow to wherever the spirit leads them next.

The picture on the left shows where St Kevin retreated when his original site became too crowded with fans. He lived in a cave here, the small one, not the large one.