The Malt and Music Festival at Ballymaloe had its inaugural outing at the weekend. A few great nights were enjoyed. I’m told. Not a night owl these times so I turned up on Sunday afternoon to enjoy some beer, some food and eine kleine Tagmusik!*

Amazing how that Big Shed has been transformed, again. The things they use! Hanging (and flashing) high up in front of the stage was, believe it or not, a Honda 50. If you had one of those in its heyday, you'd get a lady, an ex-worker and now guide at the Arigna Mines once told me! 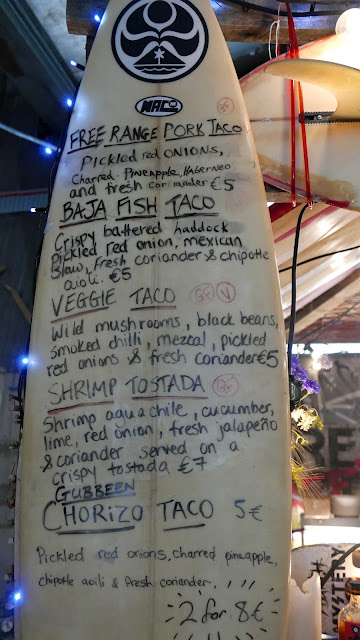 It was about lunch time when we arrived and we were spoiled for choice. One stall, Buena Vida Taco, made out of surfboards, caught my eye. They were also trumpeting their Crazy Bastard sauce. The Baja Fish Taco was our pick here: crispy battered haddock, pickled red onion, Mexican slaw, fresh coriander and chipotle aioli. Plus the saucy sauce, of course!

Quite a bite. Yet there was better to come, from Gubbeen. Their Reuben contained Pastrami, Emmental cheese, pickles, sauerkraut, and mustard. No rush job either. A superb sandwich, sandwich of the year maybe! No shortage of beers around the place but we didn't travel very far for ours, enjoying a glass of the Cotton Ball’s Indian Summer and one of the Cascade. 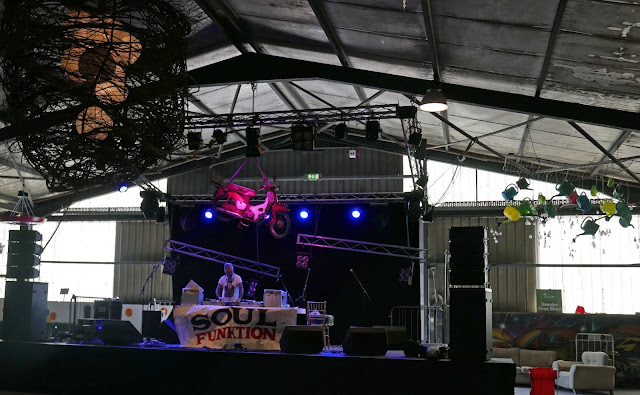 Eoin Lynch of the Cotton Ball Brewing Company was one of the four speakers in the Drinks Theatre in mid afternoon; the others were Claire Dalton of Dungarvan, Phil Cullen of Mountain Man and Michael Cowan of Manor Brewing (Wicklow). Colm McCan asked the questions and kept the flow going.

Claire told us about the family effort that led to Dungarvan getting off the ground. So what are they doing now? Well, their latest is “a sunny day beer” called Turning Tide. Light of body, Turning Tide, a lemon wheat beer, is the perfect accompaniment to a summery day, whether beach or BBQ! Moules Frites anyone?


Eoin Lynch gave up his job and had some sleepless night after setting up the Cotton Ball Brewing in the family pub in 2013. But it developed quickly, started with 800 litres, now at 2,500 litres. Less sleepless nights now. He had the Indian Summer on show, a seasonal that was so good they couldn't let it go. It is a light hybrid beer (elements of both ale and lager), notes of citrus and pineapple and it was well received in Ballymaloe.

Michael Cowan of Mont said they are a dedicated lager brewery. “With the very soft Wicklow water we have, our super-premium lager is better than the main stream piss and we are trying to improve lager’s image with a big concentration on packaging.”

He surprised us with a very dark lager called Black is the New Orange. It includes chocolate malt and orange and is clean and dry; good finish too. And he introduced Bigger than Ben Hur, a 9.2% Imperial IPA, with “a hopping regime of biblical proportions”! Pretty well balanced though, despite that big ABV. Shows that Mont do make more than lager.


Like the Cotton Ball, Phil and his wife started Mountain Man in 2013. He also told us that one of their core beers, that Hairy Goat, could well have reached the shelves as the Itchy Cow!

We got to taste his latest, the Vincent Van Coff (the name the result of a competition). What was the secret ingredient? Not too many detected the aroma but quite a few got the flavour of… coconut! It is a red ale with vanilla, chocolate and coffee. The point Phil was making was that the ability to recognise aromas and flavours can vary from person to person. “I didn't get the coconut…people starting telling me about it.. So, if you don't get it, you’re not on your own!”

As you gather, this was a rather informal session. And all the better and more enjoyable for it.