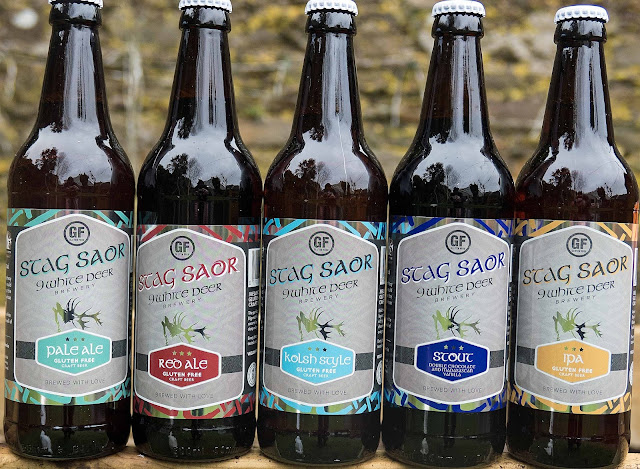 So what’s a Kölsch? This is the beer of Cologne in Germany; Kölsch means “local to Cologne” (according to Beer FAQ) and the name is protected and that is why the Ballyvourney beer is labelled Kölsch style. Like its German inspiration, this Stag Saor light beer is cold lagered. With its gentle hops and malt character, it is easy-drinking, full flavoured with fruity hints and a crisp and lager style character.

I loved the Red Ale for its depth of flavour and texture and, with its likeness (in flavour) to stout. Good too with food.

Like the others, their Pale Ale is vegan free and brewed with “love”. Easy to love too with its light body, aromas and moderate hop flavours. Lots of new age hops in the IPA. Hop usage is late in the boil so giving big flavours and aromas without major bitterness. Well balanced and quaffable.

The Saor Stout though is perhaps my favourite of the five. This is described as a double chocolate and Madagascan vanilla stout, rich and luxurious. You must try this chocolate “block” from the West Cork Gaeltacht; it is distinctive and delicious.

9 White Deer was founded in 2014 by former marine engineer, Gordon Lucey, and respected publican Don O’Leary (who runs the famous Mills Inn pub). The brewery initially offered a core range of four beers. Within the company’s first year, Don was diagnosed with a gluten intolerance, which essentially determined the direction for the business.

Don O’Leary recalls: “At first the timing seemed terrible, we had just opened a craft brewery and I identified as gluten intolerant! However, the development of Stag Saor has changed everything for the business.  It prompted us to research the market and see how limited the beer offering is for those with gluten intolerance. There have been a very small number of gluten-free lagers and pale ales developed in Ireland over the last two years but, with options still very limited, we identified an opportunity to create a full range of gluten-free beers, which also taste really good,”.
Co-founder Gordon Lucey began brewing at home in 1999 and has since become a qualified brewer.  He said, “We are determined to lead the way in breaking new ground for brewing in Ireland. It was critical to us that our gluten-free range, not only met the gluten-free requirements but also tasted great. Each batch of the Stag Saor range is independently tested and certified to maintain its excellence and to ensure that it complies with EU regulations of less than 20ppm of gluten. We regularly get the certificates back with less than 5ppm.”
9 White Deer launched its first gluten-free product, Saor, in 2015. It received a bronze medal in the 2016 Blas na hEireann awards following a blind taste testing where the judges did not know it was a gluten-free product.


Stag Saor is available nationwide from Classic Drinks and also in Dublin from CBG Wholesale. For a full list of stockists visit www.9whitedeer.ie.